Chinese steel giant announces modernization of its plant in Serbia

Chinese-invested HBIS Group Serbia Iron & Steel started here the construction of a new sinter plant on Wednesday, aiming for one of Europe's most environmentally friendly and energy efficient industrial plants. 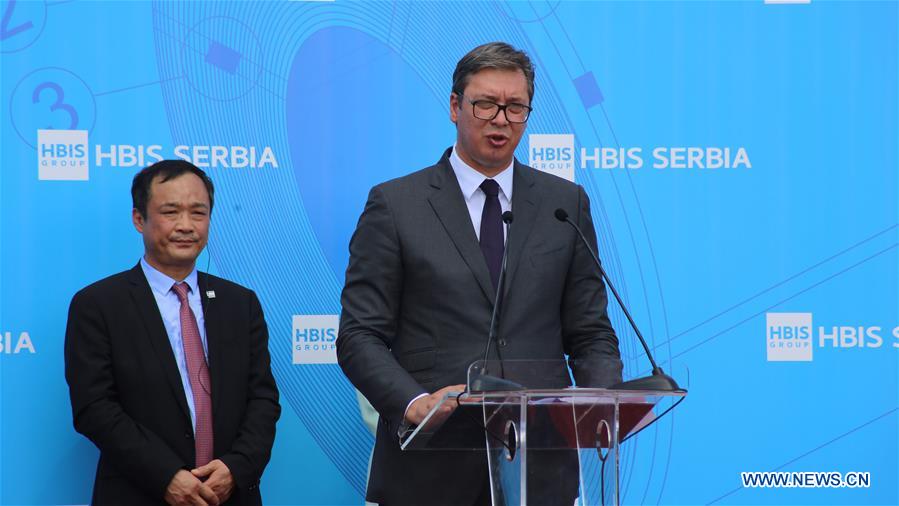 Serbian President Aleksandar Vucic (R) speaks at the groundbreaking ceremony for the construction of a new sinter plant at the Smederevo steel-mill in Smederevo, Serbia, July 24, 2019. (Photo: Xinhua)

Serbian President Aleksandar Vucic, Chinese Ambassador to Serbia Chen Bo and the President of HBIS Serbia Wang Yulan joined the groundbreaking ceremony and laid a time-capsule before government ministers and hundreds of employees.

Wang stressed that the new sinter plant is a part of a comprehensive project for energy efficiency and environment protection conducted by the company as a "key project for promoting energy efficiency, reduction of emissions, green production, and intelligent development of HBIS Serbia".

According to Wang, the project worth around 120 million U.S. dollars will make the factory a leading one in Europe, when it comes to energy efficiency.

The reason behind this investment is the aspirations of HBIS Serbia to create a competitive company in European terms, Wang said, thanking for the strong support of Serbian government.

At the ceremony, President Vucic praised the valuable investment, saying that it will bring security to more than 5,000 employees of the factory, and offers a perspective for the future.

He said that the investment also shows determination of the company.

"This investment is important for us not only because of the city of Smederevo and surrounding villages and our people who live here, but also because we want to see more children being born here in Smederevo and we want them to breath clean air, to know that they have a secure future in front of them. We also want our Chinese friends and partners to feel like home," Vucic concluded.

Chen reminded that the success of the steelworks is the result of good relations between Serbia and China.

"Despite all challenges, HBIS still managed to become the biggest exporting company in Serbia, I congratulate to you all. Every member of this family shares a dream, to turn the steel-mill in Smederevo into a modern, leading, green and intelligent European factory," said the ambassador.

HBIS purchased Serbia's formerly state-owned steel-mill in 2016, and brought the near bankrupt steel plant back to life.