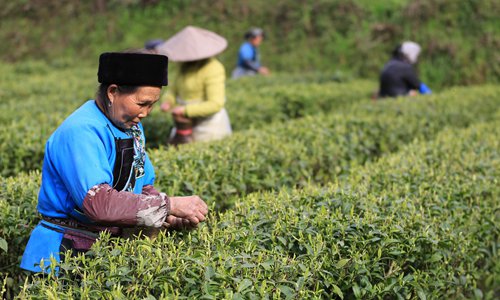 Long Xianwen, a 52-year-old tea farmer from Niujiao village in Guzhang county, Hunan Province, never imagined several years ago that the tea produced from his tea plantation in the small village would end up being enjoyed by so many foreign tea drinkers. Tea grown in the village is currently being exported around the world, especially those countries and regions taking part in China's Belt and Road Initiative. The tea plantation lies among the Niujiao mountains at around 30 degrees north latitude and enjoys natural advantages when it comes to the microclimate, altitude, ecological environment and soil. However, locals paid little attention to this naturally-gifted environment in the past. "Many years ago, villagers, myself included, left the village to find work, we had forgotten we were living right on a blessed land all along," Long told the Global Times. Now, things have changed. For Long, the plantation has become a "gold mountain" for Niujiao village that has helped lift villagers out of poverty while also helping drive the country's Belt & Road Initiative.According to Long, the tea from his village used to be served to royalty and officials in ancient China, now it has once again returned to glory as a highly reputed tea around the entire world.This is not the only change that has happened. Long himself has grown from an ordinary tea farmer to one of the newly elected deputies to the 13th National People's Congress (NPC), China's legislature.Full of ambition, Long hopes to expand the local tea industry. He plans to submit his ideas about sustainable development of the tea industry at the upcoming "two sessions," as well as advocate for improved local tourism and better local traffic conditions.Promoting border tradeChinese tea has become increasingly prominent on the global stage. Data from independent education and research website World's Top Exports shows that China was the largest tea exporter in 2016 with an export value of $1.5 billion, accounting for one-fifth of global tea exports, followed by Sri Lanka, Kenya, India and the UAE.And according to the UN's Food and Agriculture Organization, China's global tea production share has continued to climb over the past few years. From 36 percent in 2013, it rose to nearly 41 percent in 2016.Long still remembers the day he visited Italy and presented Chinese tea and tea art at the Milan Expo in 2015. The village's Guzhang Maojian, a typical Chinese green tea produced in Hunan, won the gold medal for global green tea at the expo.According to Xiong Jia, general manager of the Hunan branch of tea company China Tea, green tea, black tea and dark tea are the Chinese teas that have had the most success in Belt and Road countries and regions. Black and dark tea are preferred by those living in the far-eastern portion of Russia, Central Asia and South Asia, while African countries seem to prefer green tea.For instance, Uzbekistan's Samarkand Tea Packing Factory has been importing tea from China for around 40 years. While it also imports tea from Iran, Kenya and Vietnam, most of its orders go to China, which accounts for around 60 percent of its imports."Chinese tea is always of high quality, although the cost is high," a representative from the factory told the Global Times in an email interview.As for Africa, the green tea Desert Boat, the most exported Chinese-brand green tea, is highly welcomed there. Like in Uzbekistan, Chinese products have set the "standard" for green tea in local markets."The quality and type of products we offer differ greatly as a result of the cultural differences among customers [in different countries and regions]," noted Xiong. African drinkers tend to boil green tea in a pot, adding sugar and mint to the mix, drinkers in the Russian Far East and Central Asia prefer boiling tea with milk and salt, while Europe and the US prefer using tea bags for their convenience. "We provide different products according to customer preferences."Usually, Xiong's company transports its goods in one of two ways: By sea or over the land by train. Shipments to Africa, Europe and the US usually leave by boat from Shanghai or Shenzhen and take around 30 days to arrive, while deliveries to Central Asia are shipped mainly by train. From Hunan, tea products travel on truck or train all the way to the Alashankou port in Northwest China's Xinjiang Uyghur Autonomous Region, then make their way to various countries by train. In 2016, about 72 percent of cargo trains traveling to and from China and Europe passed through Xinjiang. This number jumped to more than 90 percent in 2017, the Xinjiang-based Urumqi Evening News reported. As a result, tea consumption in Xinjiang has increased in recent years. "It takes just a couple of hours to go from Urumqi to Uzbekistan, Turkmenistan and Kyrghyzstan. They speak a similar language, drink tea in a similar way and share similar cultures," said Xiong.The Hunan branch of China Tea is now researching ways to improve tea to better fit the tastes of younger generations in Xinjiang. Currently, the company is trying to find a way to make tea easier to mix with milk."We want to make tea and milk mix naturally together without the need to boil it. If we can do this, we think young consumers will turn to our tea," said Xiong. In Xiong's opinion, her tea has had the added benefit of helping national utility. "Many Uyghur people in Xinjiang tell me they grew up drinking our tea," she said proudly. 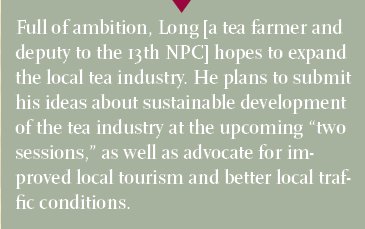 Improving the local economyThings in the village haven't always been as prosperous. In fact, the village has faced numerous hard times over the years. Long still is unable to wipe the memory of a major fire that swept through the village burning several homes on June 21, 2009. The village's crops also suffered from a frost breakout later in 2010 and then drought in 2013. When President Xi Jinping visited Hunan in November 2013, during his tour he put forward the concept of "targeted poverty alleviation," bringing people like Long not only hope, but aid in the form of funding, technology and marketing channels. Now, a village-controlled tea cooperative manages the tea plantation. "We uniformly plan, excavate the land, grow seeds and plant them," said Long, also head of the cooperative. "Then uniformly pick the leaves, process them and sell them. Everything is handled as a standardized and complete chain."The success of the village has also led to enterprises coming to Niujiao for cooperation and training. Peng Xiangquan, a Purchasing Department manager at the Anhua First Tea Factory in Anhua county, told the Global Times that the factory prioritizes Niujiao village tea when they purchase tea leaves every year.Hunan branch of China Tea, which helped the cooperative standardize its production, also shares technology and sends employees to guide village's tea production. Additionally, it purchases a set amount of tea every year at a set price regardless of market fluctuation, ensuring tea farmers have a reliable income. After that, the company helps sell their tea."The business between the cooperative and company covers around 10,000 households, that means 40,000 farmers," said Xiong. "We teach them what the standard is and how to meet it. They earn the money through their own effort. As the saying goes: It's better to teach a man to fish than to give him a fish."Long could not agree more. "In the past, we were getting by on 'blood transfusions' instead of producing blood on our own. But this couldn't not really be considered as truly alleviating poverty," said the farmer and village leader. "Without a sustainable system, the village would return to poverty in no more than two or three years. We need to fight for ourselves."Now the village produces more than 1,000 tons of tea each year. It is currently projected that the village will earn more than 100 million yuan ($15.8 million) from tea in 2018, of which e-commerce sales will account for 30 percent, Long told the Global Times."The annual per capital income used to be only 600 yuan about 10 years ago, now it has spiked to 12,000 yuan," Long said. "We said farewell to poverty in 2016!"Tea tourism is another way that the village is looking to bring in money. Newly built houses can be seen at many spots around farms in the village. "The mountains and rivers are our gold sources. We welcome people from the cities to come here and enjoy the nature and our tea," said Long.