BEIJING, Dec. 12 (Xinhua) -- China and Thailand on Wednesday vowed to enhance parliamentary exchanges and cooperation to contribute to bilateral relations. 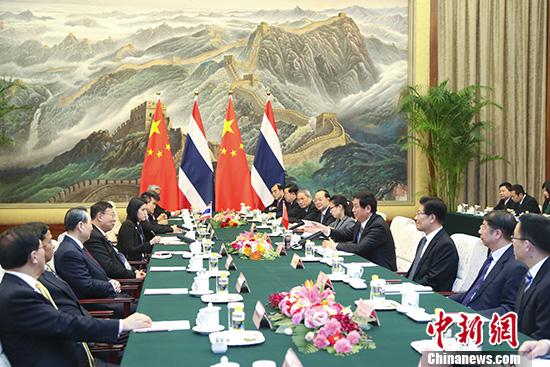 The pledge came as China's top legislator Li Zhanshu held talks with Pornpetch Wichitcholchai, president of the National Legislative Assembly of Thailand, in the Great Hall of the People in Beijing.

China and Thailand are close neighbors bound by blood, culture and economy, and the two countries and two peoples have benefited from this close relation, said Li, chairman of China's National People's Congress (NPC) Standing Committee.

He called on the two countries to continue the synergy of the Belt and Road Initiative, Thailand 4.0 strategy and Eastern Economic Corridor project, carry out cooperation in infrastructure, industrial capacity, internet finance, high tech and tourism and promote local cooperation to achieve common development.

This year marks the 40th anniversary of China's reform and opening-up. Li said China will adhere to the concept of building a community with a shared future for humanity, promote a higher level of opening up to the outside world and pursue common development and prosperity with other countries in the world, especially surrounding and neighboring countries.

Noting that the NPC and the National Legislative Assembly both play a very important role in their own countries' political life, Li called on the two legislative bodies to implement consensus reached by leaders of the two countries, maintain friendly exchanges at all levels, enhance exchanges and mutual learning on governing experience and provide legal protection to guarantee bilateral cooperation in various fields and contribute to the comprehensive cooperative partnership between the two countries.

For Pornpetch's part, he said Thailand is actively responding to the Belt and Road Initiative and stands ready to enhance interconnection and trade, deepen cooperation in technology and innovation, education and tourism with China.