ST. PETERSBURG, May 25 (Xinhua) -- Chinese Vice President Wang Qishan on Friday urged countries around the world to build trust and boost cooperation in order to tackle international challenges and cement the foundation for sustainable global growth. 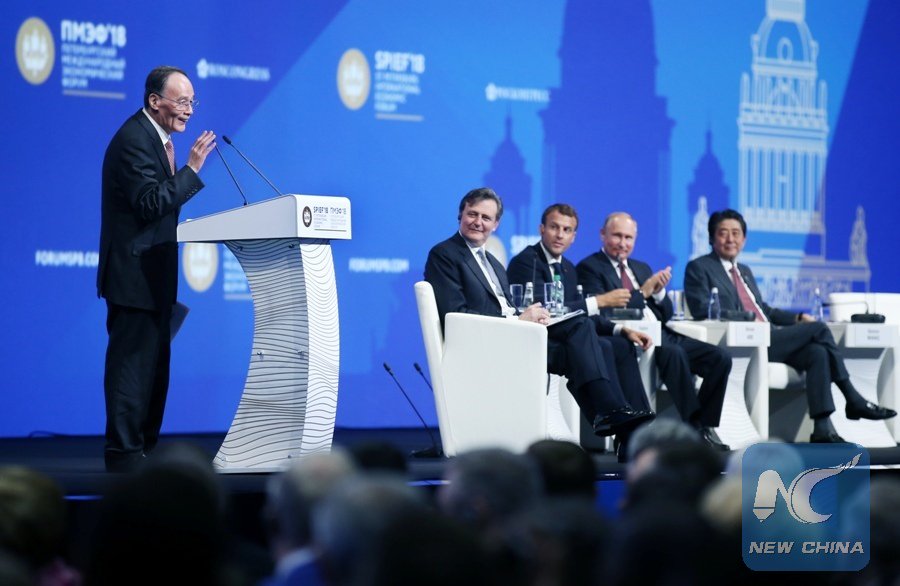 He made the appeal in a speech at a plenary session of the 22nd St. Petersburg International Economic Forum (SPIEF), a three-day event in Russia's "northern capital" with the key theme of "Building a Trust Economy."

Pointing out that no single country can cope with today's challenges alone, Wang said building a trust economy that features equality, mutual trust, mutual benefit, inclusiveness and good faith between enterprises, markets and countries, is an effective way to unleash the potential of global growth.

Building trust needs mutual understanding and mutual respect, he said, adding that it also needs all parties to discover and solve their own problems and consolidate their self-confidence.

China, he said, is forging ahead under the leadership of President Xi Jinping toward the Chinese Dream of national rejuvenation and will steadfastly stick to the opening-up policy of mutual benefit.

Hailing Russia as a constructive player in global economic governance, Wang said China highly appreciates the socioeconomic development achievements Russia has made under the leadership of President Vladimir Putin and firmly believes that Russia will realize its development goals for the next six years.

He added that with annual bilateral trade approaching 100 billion U.S. dollars, China stands ready to work with Russia to deepen their all-around cooperation, strengthen their comprehensive strategic partnership of coordination, and make new contribution to the building of a community with a shared future for mankind.