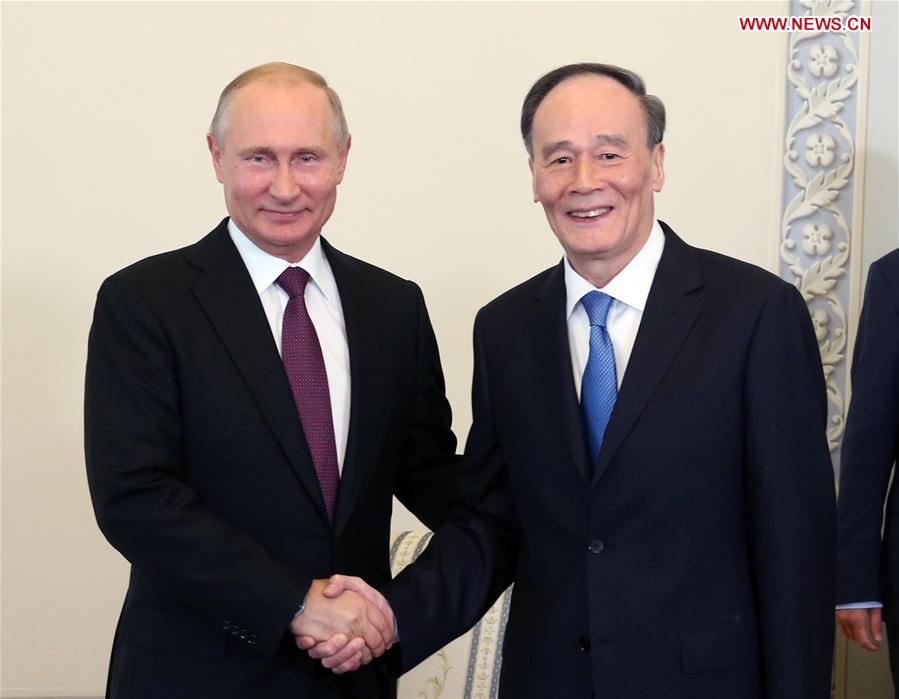 During his stay in Russia's "northern capital," he reaffirmed China's readiness to strengthen cooperation with Russia, called for a global effort against trade protectionism, and suggested that all countries build mutual trust and join hands for common development.

Wang met with Putin on Thursday shortly after arriving in St. Petersburg in his first overseas trip as vice president. The two sides agreed to further boost bilateral cooperation for the benefit of both countries and the world.

The Chinese president, added Wang, looks forward to meeting Putin again to jointly chart the future course of bilateral relations as well as the Shanghai Cooperation Organization (SCO), which is scheduled to hold this year's summit in June in China.

The heads of state of the two countries have made painstaking efforts for and injected robust energy into bilateral cooperation, continuously steering the China-Russia relationship forward, said Wang.

He pointed out that the China-Russia comprehensive strategic partnership of coordination is of great significance not only to the two countries themselves but to the world at large.

The two neighbors, he said, respect each other, trust each other, cooperate on the basis of equality, and enjoy mutual understanding and support on major international affairs.

In so doing, they have set a model of major-country relations in the current world and made great contribution to safeguarding global strategic stability and building a new type of international relations and a community with a shared future for mankind, added Wang.

The Chinese vice president stressed that it is a choice both of history and of the people that China and Russia steadfastly pursue development paths that suit their respective national realities.

Now the Chinese people, under Xi's leadership, are vigorously pushing forward the building of a socialism with Chinese characteristics for a new era, said Wang, adding that China's development is making rapid and remarkable progress.

Meanwhile, the Chinese side firmly believes that under Putin's leadership, Russia will grow stronger and more prosperous, said the vice president.

China, he added, resolutely supports Russia's development, and stands ready to carry out strategic and long-term cooperation with Russia, lift the level and quality of bilateral practical cooperation more swiftly, and achieve a deeper integration of interests, so as to bring more benefits to the two nations.

Putin, for his part, asked Wang to convey his sincere greetings and best wishes to the Chinese president, saying he is confident that Xi will lead the Chinese people to new achievements in China's development.

The Russian leader added that he is looking forward to visiting China and meeting Xi again.

Russia-China ties continue to develop at a high level, he said, noting that political mutual trust is deepening, bilateral practical cooperation is strengthening, the structure of economic and trade relations is witnessing a sizable improvement, cooperation on large projects is speeding up, and exchanges and cooperation in people-to-people areas and at the local level are gathering steam.

Meanwhile, it serves as an important stabilizer in the world that the two countries maintain close communication and coordination as well as mutual support on major regional and global issues, said Putin.

The Russian side, he added, is willing to work with China to further deepen all-around cooperation, cement mutual understanding and support on international affairs, and keep lifting the two countries' comprehensive strategic partnership of coordination to a higher level.

Addressing a plenary session of SPIEF 2018 on Friday, Wang urged countries around the world to build trust and boost cooperation in order to tackle international challenges and cement the foundation for sustainable global growth.

Pointing out that no single country can cope with today's challenges alone, Wang said building a trust economy that features equality, mutual trust, mutual benefit, inclusiveness and good faith between enterprises, markets and countries is an effective way to unleash the potential of global growth.

Building trust needs mutual understanding and mutual respect, and it also needs all parties to discover and solve their own problems and consolidate their self-confidence, he said at the event, whose key theme was "Building a Trust Economy."

China, he said, is forging ahead under Xi's leadership toward the Chinese Dream of national rejuvenation and will steadfastly stick to an opening-up policy that offers mutual benefits.

Hailing Russia as a constructive player in global economic governance, Wang said China highly appreciates the socioeconomic achievements Russia has made under Putin's leadership and firmly believes that Russia will realize its development goals over the next six years.

He added that with annual bilateral trade approaching 100 billion US dollars, China stands ready to work with Russia to deepen their all-around cooperation, strengthen their comprehensive strategic partnership of coordination, and make new contribution to the building of a community with a shared future for mankind.

Before leaving for Minsk to continue his two-nation trip, Wang also met with Igor Sechin, CEO of leading Russian oil company Rosneft, and Dmitry Mezentsev, chairman of the Russia-China Friendship Association, among other Russian dignitaries, and inspected the Pearl of the Baltic Sea project, China's largest non-energy investment undertaking in Russia.