China's urbanization is at a turning point from rapid expansion to city upgrade, and major city clusters like the Yangtze River Delta region, the Beijing-Tianjin-Hebei region and the Guangdong-Hong Kong-Macao Greater Bay Area will become the engines for future civil development, said a new report. 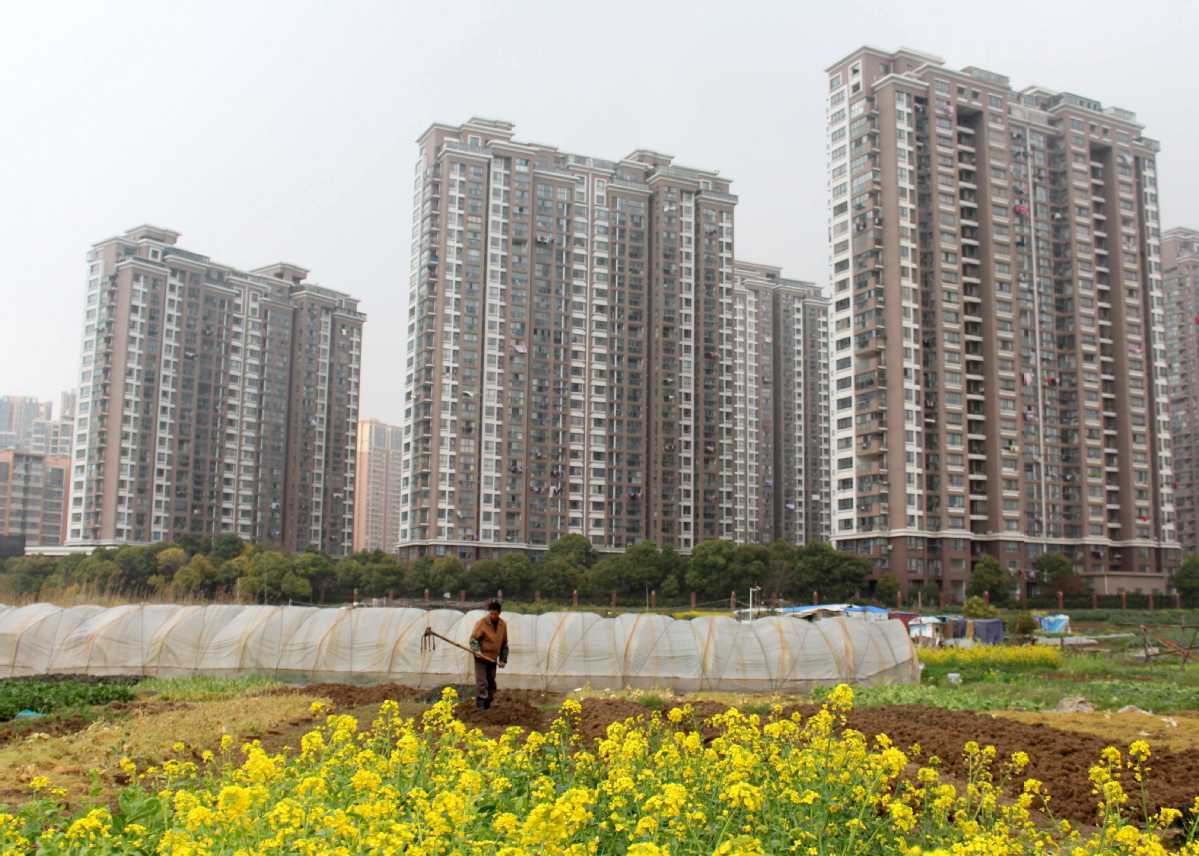 A farmer tends his field against the backdrop of a new high-rise residential building project in Changzhou, Jiangsu province. (Photo: China Daily)

Since the founding of Caoyang New Village in Shanghai in 1952, China's urban area has expanded rapidly with the number of Chinese cities quadrupling over the past seven decades, according to a report by UK-based real estate adviser Savills.

"Quite a few cities have seen their urban area expand exponentially from the previous decades, but the mode will be replaced by a new type of urbanization that is characterized with development of city clusters and renovation of the present metropolitan areas," said Zhang Lin, director of Savills China Research.

Xie Chen, head of research with CBRE China, said the new urbanization started years ago and is set to become a key engine of China's real estate sector and the economy.

"The new model of urbanization, initially raised by the central government in 2012, looks to promote urbanization that is people-oriented and focuses on both quality and quantity," said Xie.

Against this backdrop, China's urbanization has shifted from developing infrastructure and large-scale property projects to more sustainable and livable urban environment, he said.

Similarly, a new trend of developing metropolitan areas rather than single cities is emerging, with the integration of the Yangtze River Delta region and the Guangdong-Hong Kong-Macao Greater Bay Area becoming national strategies.

Due to the state of infrastructure in the early days, overall construction was the top priority. The public construction boom between 1949 and 1977 saw not only construction in the suburbs of cities, but also in the old city buildings in cities across the country. It was in this context that the first new workers' village Caoyang New Village was built, followed by many kinds of such communities in cities, which helped the promotion of national development through industrialization.

Thanks to the reform and opening-up, the urbanization rate surged from 17.9 percent in 1978 to 58.5 percent in 2018 and urban population bloomed from 170 million to 810 million during the same period, while average living space per capita expanded from 6.7 square meters to 36.6 sq m, said Yao Yao, head of research for JLL China.

In the early days of reform and opening-up, ensuring and improving basic living conditions for citizens was paramount with a focus on developing staff housing for enterprises and public institutions, according to the report.

The establishment of special economic zones and the development of commodity housing gave rise to the real estate market, introducing a new stage of urbanization.

In the past 30 years, China has experienced a rapid urbanization, with the urban population swelling by hundreds of millions, requiring an equally rapid development of new homes, according to Macdonald of Savills.

In 1998, a housing reform was launched in China to phase out the past welfare housing system, making market forces play the dominant role in the development of residential properties.

"Since then, Chinese cities witnessed a soaring demand for residential properties in the coming decades, not only from the new urban population, but also from the upgraded living requirements of local people," said Xie with CBRE.

The modern structure of the core urban areas in China's major cities took shape during the period between 1998 and 2007, thanks to the development of transportation.

Since 2008, China's real estate market, after a wave of rapid growth, has entered a mature stage. But due to lack of alternative investment channels, investors deployed a large amount of money in the property market. Caught between government regulations and market forces, the real estate market experienced several small cycles of adjustments, with prices rising periodically.

Therefore, the Central Economic Working Conference at the end of 2016 proposed for the first time that houses are for living, not for speculation, which was widely regarded as a key tone-setting message.

Ever since, policy regulation increasingly focused on establishing a long-term mechanism, as evidenced by stricter buying and lending restrictions, price caps, increases in social housing and support for developing long-term rental apartments.

In the meantime, integrated development initiatives for regions such as Beijing-Tianjin-Hebei integration, the Yangtze River Delta, and the Greater Bay Area, are gaining momentum. The regional integration will contribute to a more efficient use of resources, help shape the new urban structure, and promote higher-quality economic development.

According to Macdonald, future work will focus on more efficient use of existing land designated for development purposes, better connectivity and integration of urban clusters to create greater efficiencies and economic opportunities as well as promotion of tenant rights in line with property owner rights as well as the reform of the hukou system, while also ensuring housing is affordable for everybody.

Xie Chen with CBRE sees cross-border opportunities for all real estate sectors from the new urbanization. "Real estate of various forms makes our most important life and work environment, no matter it is work, life, or leisure activities," said Xie.

Yao of JLL said: "There is particularly high demand for long-term rental as the young and new urban population in major Chinese cities cannot afford the high cost of buying properties, so long-term rental will see substantial growth."

"After only 40 years of reform and opening-up, and just 20 years into the formation of the modern real estate industry, there is still tremendous untapped potential in China for greater urbanization, advancement in industrial upgrading and growth in consumer markets," said Robert McKellar, executive chairman of Savills Asia-Pacific.