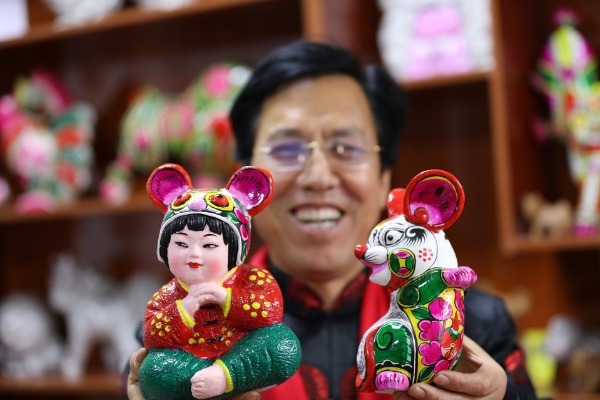 Fengxiang, a county in Baoji, a city in Northwest China's Shaanxi province, is renowned for its clay figurines. The bright-colored figurines, which come in different shapes, embody the county's distinct cultural features, and rich historical and cultural messages.[Photo/Xinhua]

Hu, 55, is a national-level inheritor of the intangible cultural heritage -- Fengxiang clay sculpture, a traditional folk art that originated in the county of Fengxiang, Northwest China's Shaanxi province.

Lately, he created a work for police officers: clay sculpture of an ox trying to pluck poppy flowers from the earth.

The sculpture was made specially for this year's International Day Against Drug Abuse and Illicit Trafficking, which falls on June 26.

The sculpture has been printed on postcards and is being promoted by police to spread anti-drugs awareness in Xi'an, capital of Shaanxi.

Fengxiang clay sculpture, better known as "the clay stuff" by locals in the county, originated during the pre-Qin period (pre-221 B.C.) and thrived in the Ming Dynasty (1368-1644).

The sculptures are fashioned from the unique earth found in Liuying Village in the county of Fengxiang. Artists like Hu knead the earth, whiten the clay, paint lines and add colors, before finishing the sculptures.

The craft was included in a national protection project for intangible cultural heritage in 2006.

Hu started making the clay sculptures as a child in Liuying Village, learning techniques from his parents who were both masters of the craft, paper-cutting and embroidery.

Currently, hundreds of families in the village make a living by making the sculptures. Every year, countless clay works are exported.

"I feel the responsibility to help pass on the traditional culture," Hu said.

Recently, Hu has found a novel way to promote the Fengxiang clay sculptures: by teaming up with police to help their campaign against drug crimes.

Remarkable progress has been achieved in China's fight against narcotics.

In the past five years, 638,000 drug crimes have been cracked, 32,000 drug trafficking gangs have been eliminated, 780,000 suspects have been arrested, and more than 400 tonnes of drugs of various kinds have been seized.

To help with the country's crackdown on drugs, Hu created the ox sculpture.

On Wednesday, police held an anti-drugs promotional activity in Xi'an, with a set of postcards on display.

The postcards were titled "Fighting drugs and eradicating drugs from the root," featuring the image of Hu's clay ox.

Also on the postcards were images of a sitting tiger, a frog, and a monkey on a horse, all traditional depictions of Fengxiang clay sculptures.

"In traditional Chinese culture, the ox is a symbol of hard work and dedication," Hu said. "So I made the sculpture to symbolize the police officers who work hard during the crackdowns on drug crimes."

The sitting tiger implies suppressing the evil and drug traffickers, he said. The image of a monkey on a horse, which means "getting success immediately" in Chinese, is an embodiment of the expectation that the fight against drugs can be successful, Hu added.

The postcards come with bar codes, which can be scanned to follow anti-drugs information on the internet, and watch how the sculptures are made.

With the postcards, police authorities aim to promote anti-drugs awareness "through the power of culture," said Pan Feng, a senior anti-drugs police officer with the public security bureau of Xi'an.

"We hope to create a safe environment with the help of Fengxiang clay sculptures in our campaign," Pan said.

Pan said they plan to include more art forms in their campaign, and create more of quality anti-drug cultural content in the future.