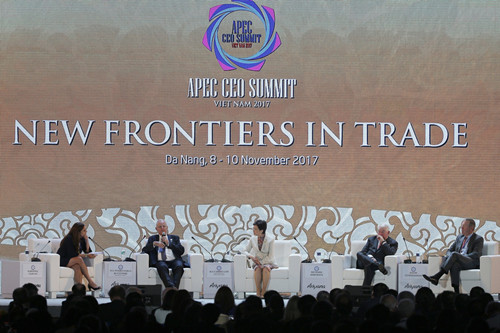 BEIJING, November 10 -- The Asia-Pacific region is expected to continue driving world economic growth and protect free trade at a time when nations are grappling with how to manage economic globalization.   Accounting for about 60 percent of global gross domestic product, the 21-member Asia-Pacific Economic Cooperation (APEC) makes up nearly half of world trade and 40 percent of the population on the Earth.   The 25th APEC Economic Leaders' Meeting kicked off on Thursday in Vietnam's central Da Nang city.   In a world of growing interdependence, APEC leaders are pondering the way forward to tackle challenges to economic globalization.   Since the beginning of this year, against the backdrop of a series of Black Swan events - such as Brexit - anti-globalization sentiment and protectionism have been on the rise, frustrating attempts to lessen the divides brought by globalization.   To restore confidence, China has firmly voiced its stance that building a Free Trade Area in the Asia-Pacific is a strategic initiative critical for the long-term prosperity of the region and the world.   Economic globalization has promoted trade and brought tangible growth to the Asia-Pacific region in the past several decades, lifting tens of millions of people out of poverty and turning it into a growth engine for the whole world.   While underlining achievements of economic globalization, the international community should be aware that it may lead to a widening wealth gap if inappropriately handled.   The world should guide the direction and seek to achieve a re-balance of economic globalization in order to allow people from across the world to benefit from common development.   A transparent, non-discriminative, open and inclusive multilateral trade regime will definitely help accelerate this process.   To this end, China has made a major push by proposing the Belt and Road Initiative, an inclusive cooperation platform to improve trade links among involved countries across the globe.   Aiming to build an open economy, ensure free and inclusive trade, while at the same time opposing all forms of protectionism, the initiative matches the development strategies of APEC nations, and together with the concept of building a community of shared future for mankind to build confidence at a time when economic globalization has encountered some setbacks.   APEC was born in late 1980s when globalization and regional economic integrity started to accelerate.   Given the challenges and setbacks, now is the time for this dynamic engine to remind the world to safeguard the multilateral trade regime and open economies.