China and Africa, though thousands of miles away in geographic location, have been eyeing a relationship of mutual support and sincere cooperation like the Nile River flowing far and forever. No matter how the international situation changes, the two countries always set mutual respect, mutual trust, mutual support and joint development as the underlying principle in developing their relations.

Egypt was the first African country to establish diplomatic ties with China 62 years ago. Under the care of leaders of both countries, China and Egypt have yielded fruitful results from their thriving friendly cooperation in recent years. The two countries have made concerted efforts to bring the comprehensive strategic partnership built in 2014 into a new phase of accelerated development.

The regular meetings between Chinese and Egyptian leaders have strongly deepened friendly cooperation. The two countries have great synergy of development strategies, which has driven bilateral pragmatic cooperation toward substantial progress.

The two sides are propelling the China-proposed Belt and Road Initiative and the development of Egypt's Suez Canal Corridor, as well as other national development plans in a coordinated way.

In addition, the two countries have made a great leap forward in the construction of big projects, and are unleashing new potential of cooperation in areas of power and energy, rail transport, urban construction, satellite technology, culture and education.

China is increasing investment in Egypt, and a number of their cooperation projects have been listed as key ones under China-Africa cooperation framework. China and Egypt are joining hands to forge ahead and creating new prospects for cooperation. 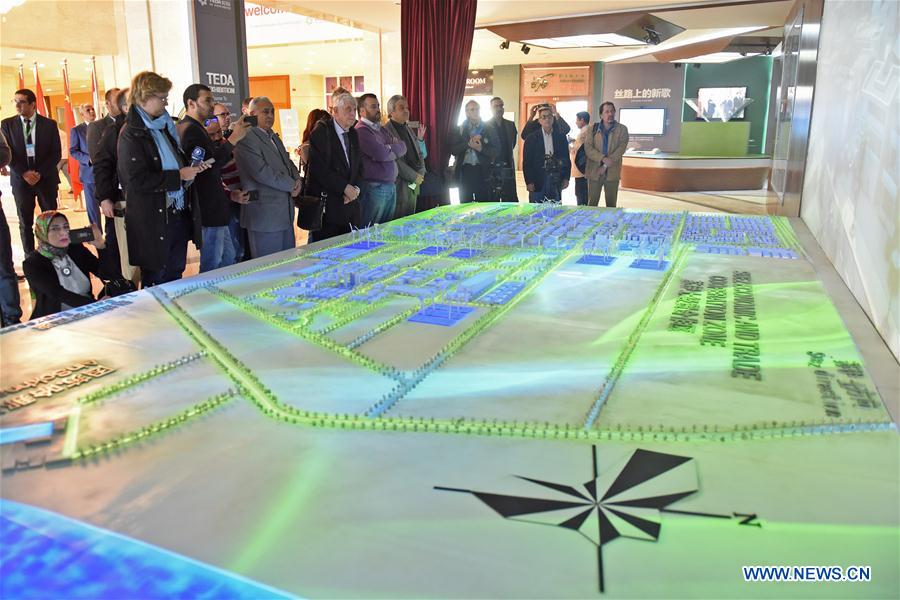 Journalists visit the sand table model of the joint Suez Economic and Trade Cooperation Zone established by China's TEDA corporation, one of the oldest industrial developers of the Suez Canal Economic Zone (SCZone), in Ain Sokhna, east of capital Cairo, Egypt on March 13, 2017.

As Chinese Ambassador to Egypt, I’m a witness and participator of the rapid development of China-Egypt relations. Here, I feel by myself the endless content and far-reaching influence of the age-old Egyptian civilization. It allows the Egyptians to grasp the general direction of national development at crucial moments for making choices and rise to challenges.

Egypt has entered a new era of focusing on social stability and economic development. In addition, it is laying more importance on developing diplomatic ties with other African countries. Next year, Egyptian President Abdel Fattah al-Sisi will hold the rotating chairman of the African Union. My Egyptian friends and I feel very proud and happy that both China-Egypt and China-Africa ties are progressing well with strong momentum.

This sincere cooperation will make greater contribution to global peace and development. China and Africa can totally take one step ahead in constructing a community of common destiny for mankind and set an example for building a new type of international relations.

As an Egyptian saying goes “once you drink from the Nile, you are destined to return”, the meetings of Chinese leaders with their counterparts from Egypt and other African countries will again prove the stability and vitality of bilateral relations.