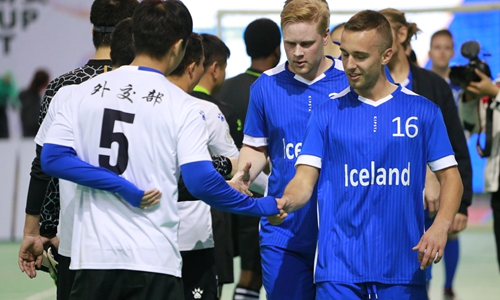 The team of Beijing Sports University (BSU) crowned as champion of the 5th Sino-Nordic Cup Football Tournament on Sunday.
A total of eight teams from the embassies of the five Nordic countries—Sweden, Denmark, Finland, Norway, Iceland, and Ministry of Foreign Affairs of China(MFA), China Football Association (CFA), and Beijing Sports University (BSU) were divided into two groups and performed in China Agricultural University (CAU)'s Olympic-level stadium.
Ambassadors and other distinguished guests presented blessing speeches before the match kicked off, followed by a band's show from MFA employees and a dancing performance from BSU students.
"This tournament has already become a strong tradition as the Nordic teams meet the Chinese friends for the fifth time," said Jarno Syrjälä, ambassador of Finland to China, who has participated in the tournament three times as a player, said at the opening ceremony. Syrjälä also mentioned the year of 2019 marks the China-Finland year of Winter Sports.
Lin Jian, counsellor of Department of European Affairs of MFA, said that having been successfully held for four times, the tournament illustrates the prosperity of Sino-Nordic cooperation and exchanges in recent years as China is opening wider.
"I hope the football tournament will continue to be a platform for mutual understanding and friendship and will inject more positive energy into Sino-Nordic cooperation,"Lin noted.
Soccer always provides opportunity to meet friends. As one of the organizers, the CAU will provide full support to all players, said Gong Yuanshi, vice president of China Agricultural University.
Annually held since 2015, the Sino-Nordic Cup Football Tournament is a series of soccer competitions jointly organized by the Department of European Affairs of the Ministry of Foreign Affairs and the Global Times, to celebrate the ongoing close diplomatic relations between China and the five Nordic countries.