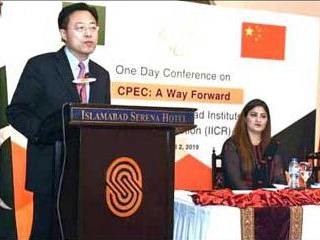 Islamabad Institute of Conflict Resolution (IICR) held a conference at the Serena Hotel, Islamabad. The Inaugural Session was initiated with the recitation of Holy Quran and was followed by the Welcome remarks by the Executive Director of IICR Ms. Sabah Aslam. She opened the conference by claiming that with the emergence of CPEC, strengthening of long-standing relationship that Pakistan and China share in the realm of politics, economy and strategy is a compelling truth of the contemporary international relations. Both states share a bond of respect that goes beyond diplomatic relations and delves in to the social fabric of the two states. The entire Pakistani nation looks up at the project and its going forward.

After this, the Keynote Speaker, H.E Mr. Zhao Lijian who is the DCM and Minister Counsellor to the Embassy of China. He began by addressing the Chief Guest Senator Rehman and congratulated on the success of CPEC. He said that this is a long terms plan and benefits people on both side.  The major areas in which CPEC operates are; economy, energy and infrastructure. He further elaborated that after the success of the first phase, CPEC is moving towards its second phase which operates in four areas; more exhaustive work on infrastructure like Motorway 5; from Multan to Sukkur which is hopefully going to be finished ahead of time and launched by August. There is also going to be a major focus on the railway up gradation from Karachi towards Peshawar and from Single Line to Double Line. Previously the speed would be 60 km/h and after this upgrade it will become 160 km/h. these will not affect the current operations and will take around 6 years to complete. .

Apart from that another area of special importance are the SEZ’s and China has identified 9 more SEZ’s. Chinese companies are working with the government in Khyber Pakhtunkhwa. Their Governor will be visiting the Second Beijing Summit and discuss the working on one of the SEZ’s via these SEZ’s there us a new area of cooperation which will be launched between Pakistan and China.

After this address, the Chief Guest Senator Rehman Malik addressed the guests. He reiterated the importance of friendship between Pakistan and China. He referred to history and recalled that when n other state was there to support Pakistan, China was the one which stood by.

Pakistan and China and their friendship cannot be broken down so easily and this will stand all the tests of time. He said that the Chinese government should also extend into working on formulating a plan via which the debt burden on Pakistan can be eased.

After this the second session began which was composed of various papers which were presented by the academic circle.