VIENTIANE, Feb. 3 (Xinhua) -- All the key projects along the China-Laos railway are set to be completed specifically on exact dates, such as those of the tunnels to be bored through, bridges' closure and concrete casting of substructures. 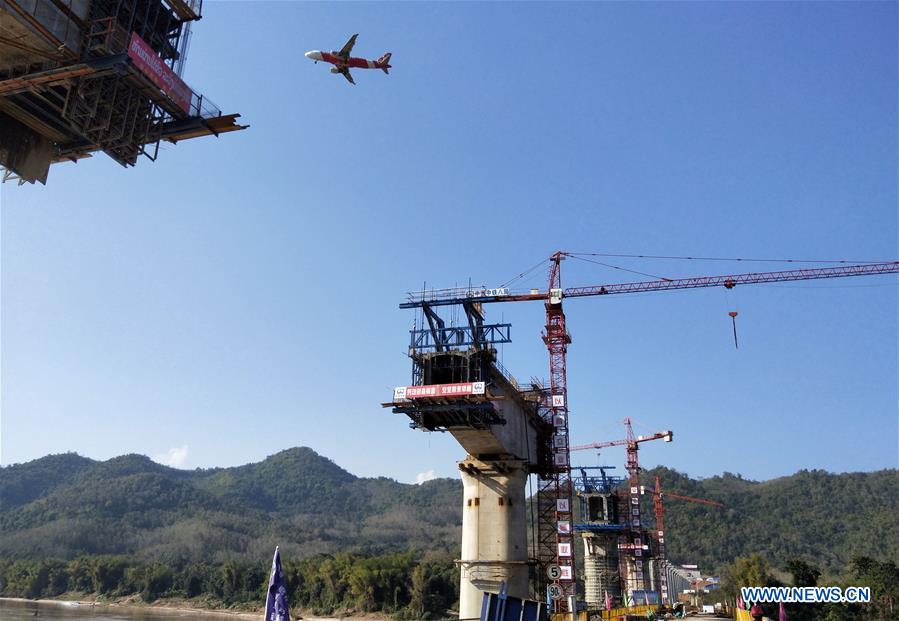 "This is the way the project construction is pushed forward, because we can only start the next step after the preceding work is done," Xiao Qianwen, the Communist Party of China (CPC) secretary of joint working committee of the China-Laos railway, told Xinhua on Sunday while inspecting the project.

The traditional Chinese Lunar New Year, or Spring Festival, falls on Feb. 5 this year in the dry season of Laos, when is the most favorable period for construction.

"Most of the Chinese workers and engineers have to give up vacation and stay at the construction sites. The Chinese staff can be busier during the Spring Festival than usual, since the construction of the outstanding project under the Belt and Road Initiative is entering the critical and decisive phase in 2019," Xiao said.

"We have completed the 100th T-shape concrete beam today," Hu Bin, manager of the China Railway No.2 Engineering Group (CREC-2) Vientiane beam fabrication yard, told Xinhua. Thus, the yard has achieved one progress, out of the 50 marked in the timetable.

However, the manager could not let out a sigh of relief. "In the coming days of the Spring Festival, we are to erect the beams of the longest-ever bridge of the railway and the Laos, the Nam Khone super major railway bridge in the north of Lao capital Vientiane," he said.

The CREC-2 beam yard lies at the southern end of the China-Laos railway. The yard has set a record that it started construction in last February, cast the first beam in June and erected the first railway beam in December in the same year.

At the northern end of the railway, which is bordering China, the Chinese railway engineering companies are also as busy as bees.

The Chinese workers and engineers chose to produce joys and make new year wishes with their Lao colleagues at their off-work time.

Prior to the festival at the CREC-5 project camp in Boten, or the China Railway International's construction site of the future Muangxay Railway Station, Chinese staff can be seen, together with their Lao partners, decorating their dorms and offices. They hung red lanterns, New Year blessing slogans and New Year couplets, which symbolize the traditional Chinese culture.

The Chinese will send a camp video to their families to assure their loved ones feeling the atmosphere of the New Year abroad. The Lao staff will also share the Chinese New Year fun with their families and friends through cellphone videos. 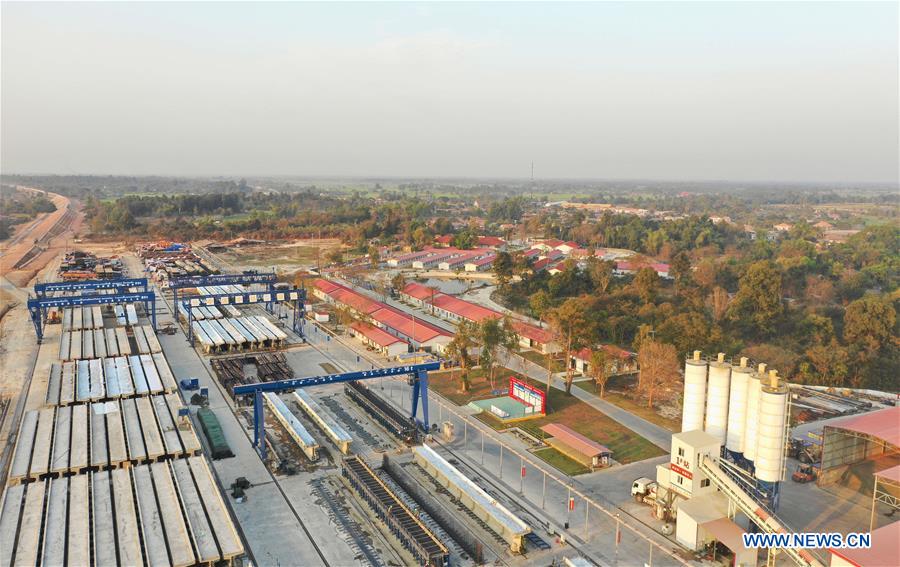 The middle section of the China-Laos railway runs through tropical forests. The CREC-8 has done a great job there last year when it planted all the piers of the two cross-Mekong bridges.

The CREC-8's No.2 subsection is constructing a length of 18.125 km railway, with 17.777-km tunnels, completely in an uninhabited area. Till February, the subsection has bored 11.186 km of tunnel, or 63 percent of the total drilling.

"We've overcome the hardships at the early stage with almost no entrance to the construction sites, but it's not the time to relax," Wu Zhibin, the CPC secretary at the subsection told Xinhua. "I've been in the project for two Spring Festivals, and I will be here during this festival too," he said.

Wu said in his first Spring Festival spent there in the mountains, the Lao staff were curious about the way the Chinese workers celebrate, but now all of them join the celebration and enjoy the festive atmosphere.

"I feel the project has been filled with something new and something familiar. The sense of unity and happiness might be the characteristics of the Spring Festival along the China-Laos railway," the subsection manager Yuan Rong said.

The construction of Ban Muang No. 2 tunnel, one of the key node of the railway in northern Laos' Luang Prabang province, is full of risks and difficulties. The construction is at the critical stage during the Spring Festival and many Chinese workers remain at the site.

"The cellphone couldn't do so much good at that time and I could only use it to make some expensive phone calls. Now it's fine. I can talk with my wife and kids," said Hu Hongbing, who has joined the CREC-8's tunnel boring team in China and abroad for over 10 years.

The first thing, the same as his other Chinese peers after coming out of the under-construction tunnel, is picking up his mobile phone.

Hu said no matter how exhausted he was he felt the warmth after hearing his family's voices and kids' laughters.

Aluogebu, an ethnic worker from western China's Sichuan province, is building a tunnel with CREC-5 in the northern Lao border town of Boten.

"The Chengdu-Kunming Railway changed my hometown, and I know what a railway means. I deeply felt the aspiration of the Lao people to the railway, just like my hometown fellows were looking forward to the railway," he told Xinhua.

"So, I don't go home this Spring Festival, but stay at the construction site, try to dig through the Boten railway tunnel and complete the railway construction as soon as possible, so as to make the Lao people take their own train and enjoy the benefits of the railway earlier," he said.

Liang Jingyu, one of the hundreds of Chinese engineers working at the railway construction sites, told Xinhua that this year is the 10th Spring Festival he had been on duty.

The China-Laos railway is promoted by leaders of the two countries as one of the interconnectivity projects under the China-proposed Belt and Road Initiative.

Tunnels, bridges and roadbeds have been built along the route after construction of the cross-border railway began in December 2016. It is expected to be operational in December 2021.

The 414-km China-Laos railway runs from Mohan-Boten border gate in northern Laos to the capital of Vientiane with an operating speed of 160 km per hour.