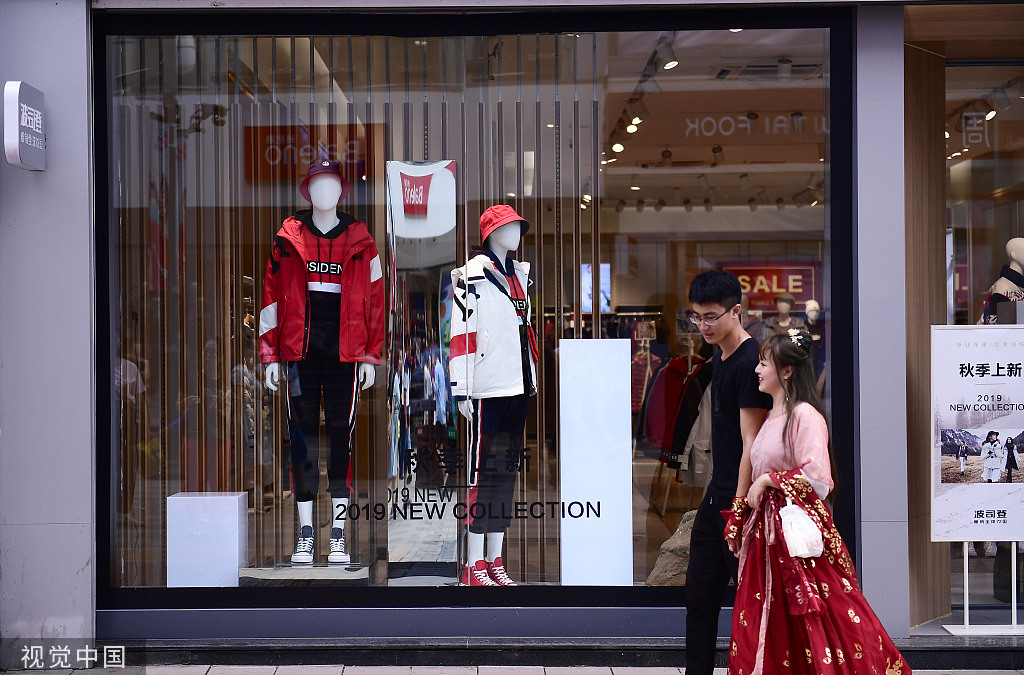 More companies with annual revenue of up to 10 billion yuan ($1.42 billion) can be seen piling into different market segments of China, inspired by the tremendous potential in the country's swiftly expanding consumption of goods and services.

The key for their success is to impress consumers with the distinct value of companies which are evolving in their branding and product differentiation, industry experts said.

Total retail sales of consumer goods reached over 19.52 trillion yuan in the first half of 2019, up 8.4 percent year-on-year, data from the National Bureau of Statistics showed. China's GDP grew by 6.3 percent in the first half of the year, and consumption contributed 60.1 percent to the country's GDP growth, showcasing the critical role of consumption in driving economic development.

The figure "10 billion yuan" is regarded as a threshold for a company to become a potential industry leader, a bargaining chip to attract capital and talent, and the eligibility of speech and pricing power in the global market, said Yao Rongjun, president of Shanghai Kmind Enterprise Management Consulting Co Ltd, a strategic consulting company.

China at this time has about 1,000 companies whose annual revenue has surpassed 10 billion yuan, data from the China Enterprise Confederation showed. As the Chinese economy is transforming from rapid growth to high-quality development, more "10 billion yuan" level enterprises are needed to lead in industrial progress, Yao added.

Oversupply and the internet, though, have brought fierce competition in almost all industries, and it seems more difficult for companies to make money compared to one or two decades ago, Kmind chairman Xie Weishan said at a forum in Beijing on Monday.

"Nowadays the most important thing for companies is not to improve inner efficiency or reduce cost, but to defeat competitors and win more clients," he said, adding the differentiation has become vital for survival. "Real business value is not the net asset or market value, but the differentiation rooted in peoples' minds."

In 2008, the domestic milk powder industry experienced a serious crisis when a few baby formulas by some Chinese brands were found to have been contaminated with melamine, a toxic chemical. Chinese consumers lost trust in domestic milk powder producers and turned to overseas brands.

Ten years on, Feihe Dairy, a 57-year-old domestic firm, became the first outfit in the Chinese infant and toddler formula industry to surpass 10 billion yuan in annual revenue. Its ranking in market share rose from No 7 in 2015 to No 1 in China, surpassing all foreign brands.

The reason for the change, according to Xie, is that they have found their distinctive differentiation as the first dairy company to build a Chinese breast milk database. Feihe has the advantage in research and development of formula "more suitable for Chinese babies", as it says in its advertisement.

"We found that when a salesperson briefs customers with this idea, they are more willing to buy it," Xie added.

The secret is the reconstruction of its brand image. Hip flagship stores were opened in core commercial areas, global professional designers were hired, the fabric, down feather and production techniques were improved. All the steps attracted younger affluent customers.

Bosideng also eliminated businesses that had nothing to do with down jackets, focusing only on its core products.

"Companies need to explain one thing: 'What distinctive value can we create for customers?' If the question cannot be answered clearly, the development cannot be sustainable," said Xu Lianzheng, co-president of Kmind.

Bosideng's story helped Kmind win a silver medal at the Constantinus International Award from the International Council of Management Consulting Institutes in October, out of over 160 cases from leading consultancies in about 20 countries. The award is known as the highest recognition by the profession of management consulting, according to Dwight Mihalicz, chairman of the ICMCI.

"Kmind helped Bosideng to regain popularity among the mainstream consumer group, enhance its position as a down jacket leader and to realize significant growth in sales and profit," Mihalicz said at a news conference in Beijing on Monday.

Xie added the brand's reconstruction involved everything, not just advertising. It included pricing, decoration of stores, the training of salesmen in stores, use of materials, supply chain, selection of designers, and even the location of the news conference.

"Business performance is generated by the integration of all operational elements."

The importance of a brand has been highlighted at the national level as well.

In 2017, the State Council approved the establishment of "China Brand Day" on May 10 of every year.

Dong Jinggui, chairman of e-bike manufacturer Yadea, said they once struggled with price wars in early 2015. The shrinking market share and loss of profit troubled Dong.

The change occurred after the firm began to shift its focus from price wars to brand construction - "higher-end e-bike" - by upgrading the function, appearance, experience of riding and services at its stores.

Xie believed it's not a dream for companies to record 10 billion yuan or even 100 billion yuan in annual revenue in China, given the country's 1.4 billion population and 500 million middle-income consumers, which suggests enormous potential in consumption demand.

"For one thing, the diversified demands of consumers in different regions of China are not sufficiently satisfied. For the other, many consumer markets are decentralized and lacking top products or better services, which suggests more space for companies to explore," Xie said.

Li Jianming, deputy director general of the China Enterprise Confederation and the China Enterprise Directors Association, said besides the government and the companies themselves, third parties, such as consultancy firms, training agencies and law firms, also play a role in boosting development of enterprises.