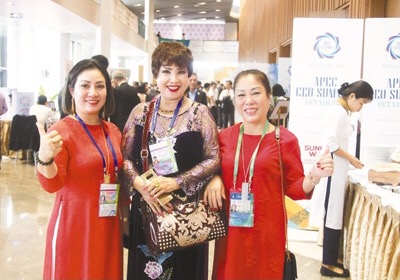 This meeting has received significant attention at the highest-level and is the most influential economic cooperation forum that covers the broadest area of the Asia-Pacific region.

It is the first major international meeting that President Xi Jinping will attend after the 19th National Congress of the Communist Party of China. “New Era,” “New Journey” and “Chinese Solutions” have become the hot topics in all sessions of the meeting before President Xi’s arrival.

It is a genuinely inspiring New Era

The first session, themed “The Future of Globalization” and was unveiled on the afternoon of November 8, was well attended by thousands of guests. During the session there was an exchange of views on the current global situation and its future.

World Bank Vice President for East Asia and Pacific Victoria Kwakwa said she agrees with President Xi’s remarks at the World Economic Forum on the global future. “Whether you like it or not, the global economy is the big ocean that you cannot escape from.” She added that any attempt to channel the waters in the ocean back into isolated lakes and creeks is simply not possible.

In her view, alongside the success of the 19th CPC National Congress, China enters into a new era of development, which brings new faith and hopes for economic globalization. Reiteration of quality growth, opening-up, and global participation is significant strategic direction for the world.

The Chinese leaders do the right thing

Due to the irreplaceable role China plays in the international arena, the 19th CPC National Congress has often been discussed and studied by the business community. China’s policy direction exerts direct influence on international cooperation and development choices of enterprises.

“The 19th CPC National Congress conveys the important message of how the Chinese people think and do things. It means a lot for enterprises if China sustains economic growth and opening-up in the next two or three decades.” Federick R. Burke, the executive director of Baker McKenzie law firm, said in the interview. “Enterprise investment requires a stable environment. Aided by the increasingly enhanced rule of law, China is super attractive for foreign investors.”

He added that more and more Chinese enterprises are investing overseas. 5% of his firm’s revenue comes from the cooperation with Chinese enterprises. For example, the Belt and Road Initiative will boost economic growth, benefiting all countries in the region.

On November 9, PricewaterhouseCoopers (PwC) Global President Luo Haozhi said, they are looking forward to further relaxing control over market access, opening up the service sector and broadening the opening to the outside world.

The report released by PwC after the 19th CPC National Congress pointed out that China, the second largest world economy, will play a more significant role in shaping the world’s future agenda and share “Chinese Solutions” with other countries. It will exert significant influence over the next three decades on both China’s economic and social development and the whole world. (Compiled by Zhang Shan)