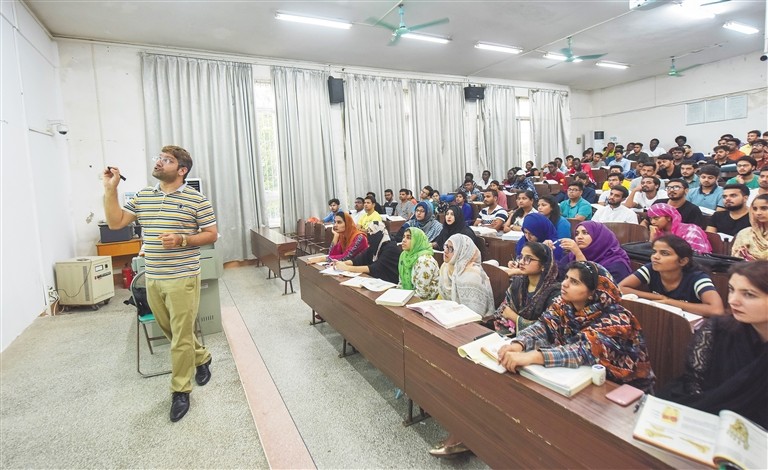 ISLAMABAD, Nov. 24 (Xinhua) -- Pakistan's Minister of Planning, Development and Reform Asad Umar has said that industrial cooperation under the second phase of the China-Pakistan Economic Corridor (CPEC) would bring a permanent boom in the country's employment sector.

Umar, who took charge of his ministry early this week, told a press conference on Saturday in the country's southern port city Karachi that initially nine Special Economic Zones will be established across the country with the first of its kind to be inaugurated in the northwest Khyber Pakhtunkhwa province soon.

The minister said the first phase of CPEC has already been completed successfully by improving infrastructure, establishing power plants and developing and operationalizing southwest Gwadar port and now the second phase is bringing cooperation in the social sector, agriculture development and industrial cooperation.

The minister rejected the notion that CPEC is increasing debt and made it clear to media persons that CPEC brought only 4.9 billion U.S. dollars loan to Pakistan at the average interest rate of 2.34 percent, which is comparatively very low, while the rest is an investment.

"CPEC did not put a burden on the Pakistani economy but helped it coming out of crises. CPEC brought a revolution in infrastructure and helped Pakistan in the financing," said the minister, adding that the project is not an aid but trade.

The minister told critics of CPEC to come forward and benefit from the investment opportunities under the project.

CPEC is an inclusive project as is the Belt and Road Initiative (BRI). Pakistan and the whole region can benefit from these projects if we establish a trend of cooperation and peace in the region, said Umar, who believed that the Chinese-proposed BRI can bring prosperity and sustainable development throughout the region.

The minister, who quit from finance minister's post in April this year, said China has been advancing in modern technologies in all sectors and that the Pakistani government has planned to benefit from the Chinese experience and expertise maximum.