ISLAMABAD, May 7 (Xinhua) -- Rafaqat Ali, 24, was born in a poor family in Sahiwal district of Pakistan's east Punjab province. His father's meager income restrained Ali from getting education, leaving no choice for him but to work as a laborer to support the family. 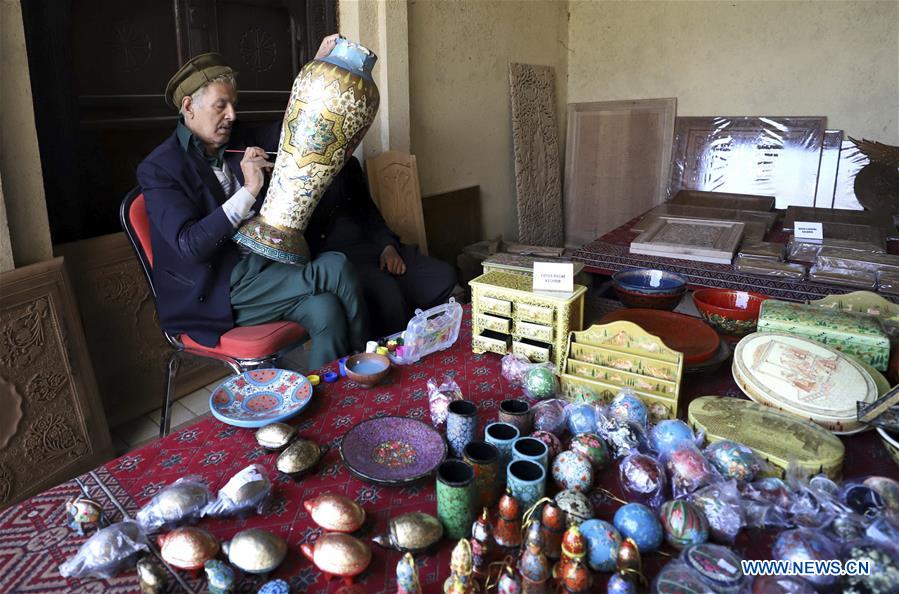 An artist paints on a pot during Dying Crafts of Pakistan exhibition in Islamabad, capital of Pakistan, March 12, 2019. (Photos: Xinhua)

"My father and grandfather were plumbers so I inherited this profession. I used to work as a plumber in my village when one day I came to know that a Chinese company is launching a power project in Sahiwal," Ali told Xinhua, adding that he applied for the job of a plumber in the company and was immediately selected by the Chinese.

Located in Sahiwal, the coal-fired Sahiwal power plant is a key project under the China-Pakistan Economic Corridor (CPEC). Completed in the record period of 22 months, it is the first coal-fired power plant completed under the CPEC.

Ali impressed his Chinese colleagues with his hard work and dedication, who promoted him to the slot of the manager of labor management. "CPEC has been a game-changer for me, before getting the job in the Sahiwal power project, no one even noticed the guy (Ali) who would repair taps in their kitchens and washrooms, no one liked to talk to him, but now everyone likes to meet the 'new me' who has money and who works as a small boss in a big Chinese company," said Ali.

The CPEC has provided employment opportunities to Ali and many others like him, who were either unemployed or underpaid. CPEC projects have created more than 75,000 direct job opportunities for Pakistani people.

The project also created thousands of other employment opportunities to promote economic development and employment of Pakistan by subcontracting a large number of projects to local Pakistani companies.

In a conversation with Xinhua, Bilal Chaudhry, manager of human resource development in the Sahiwal power plant, said that the CPEC project has helped uplift the life of common laborers who could hardly make 6,000-8,000 (about 42-56 U.S. dollars) a month.

"The unskilled laborers employed by us now take home minimum 18,000 rupees (about 127 U.S. dollars) which gets increased based on their performance, and we also provide them free food, free accommodation and free transportation."

He said that the life of local laborers has changed for better after joining the project because they earn more money than before, they can send their children to school and buy good clothes for them.

Talking to Xinhua about the forthcoming employment opportunities, Muhammad Muzammil Zia, policy head of job growth and human resource development in the CPEC Centre of Excellence, said that a huge demand for white collar and blue collar jobs will emerge after the initiation of the industrial phase of CPEC in nine special economic zones (SEZs) proposed under the CPEC.

The CPEC Centre of Excellence is an Islamabad-based think tank working under Pakistan's Ministry of Planning, Development and Reform.

The SEZs will bring new opportunities as well as challenges for Pakistani labor as with the immense industrialization, demand for skilled labor will increase, Zia said, adding that Chinese companies and Pakistan's state-run institutions are teaching local laborers skills to help them avail employment opportunities in the industrial sector.

According to Pakistan's Ministry of Planning, Development and Reform, the Pakistani market has the ninth largest labor force in the world with an estimate of 61 million workers, out of which 5.9 percent are unemployed. Out of the total labor force, about 43 percent is associated with the agriculture sector, 20 percent work for the industrial sector while the remaining, about 37 percent do miscellaneous labor work.

The increased demand for skillful labor is currently a challenge for Pakistan, as the country's Education Minister Shafqat Mahmood recently said that each year, around 2.5 million people enter the local job market while the majority of them lack necessary skills to meet the demands of the local industry.

The National Vocational and Technical Training Commission recently said in a statement that the country's system has a capacity to produce only 445,000 skilled laborers annually.

To bridge up this gap, Chinese companies are providing on-job training to raw laborers to make them meet the demands of the industry.

Chaudhry told Xinhua that at the peak time of the Sahiwal project, they hired 3,000 laborers and provided them on-job training to equip them with basic skills for working in the industrial sector.

"The laborers we trained are now working at good positions in other companies including power projects. They got quick promotions in whatever companies they went, some of them are now even training other local staff in their respective companies," he said.

In a conversation with Xinhua, Dileep Kumar, mine manager in Thar coalfield, said that they hired raw laborers and gave them training courses to help them work in the power project. "Some Chinese engineers trained raw local laborers for three months free of cost, then they were given on-field technical training during which they were also paid basic salaries."

"The number of skilled labor in Thar used to be less than one percent. After the CPEC project, now more than 80 percent of laborers are trained. You can imagine how their life has changed and how their confidence has been boosted," said Kumar.

"They are skilled now, even if they don't want to work with us, they have a vast scope in the market, and they can get job anywhere."