The third session of the 12th CPPCC Shaanxi Provincial Committee opened on January 14 in Xi'an, capital of Shaanxi province, with the annual working report made by Han Yong, chairman of the Committee. 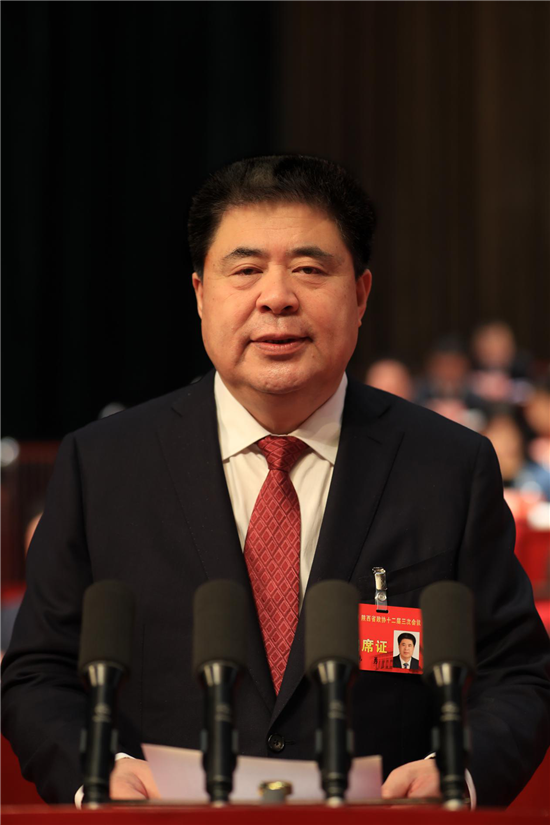 Han said in his report that 2019 was the 70th anniversary of the founding of the People's Republic of China, and was a key year for building a moderately prosperous society in an all-round way.

“Under the leadership of the CPC Shaanxi Provincial Committee, the 12th CPPCC Shaanxi Provincial Committee," the chairman said. "We have meticulously organized all parties, groups and people from all walks of life to participate in the CPPCC, actively made suggestions on capital management, focused on building consensus, and made important contributions to Shaanxi's pursuit of transcendence in the new era.”

“These proposals provide important support for the scientific decision-making of the party and government, and play a positive role in the construction of Shaanxi's economic, political, cultural, social and ecological civilization," Liu said. "In terms of ensuring and improving people's livelihood, 395 proposals were put forward, accounting for 38.8 percent of the total, accounting for the highest proportion, involving such pressing issues as education, employment, social security and poverty alleviation.”

In deploying the work for the new year, Han Yong pointed out that 2020 is the final year of building a moderately prosperous society in an all-round way through the 13th five year plan, as well as the first year of fully implementing the spirit of the CPPCC working conference.

Han said that the general requirements of this year's work of the CPPCC Shaanxi provincial committee are that: adheres to and develops socialism with Chinese characteristics as the main axis of consolidating a common ideological and political foundation; serves the goal of "two one hundred years" as the main line of work; and takes the strengthening of ideological and political guidance and extensive consensus-building as the central link, and conscientiously implements it.

“We should earnestly implement the spirit of the working conference of the CPPCC Central Committee, implement the deployment requirements of the Shaanxi Provincial Committee of the Communist Party of China, give full play to the role of special consultation institutions, strive to promote the two-way process of making suggestions and gathering consensus, strive to build the CPPCC Provincial Committee into an important position to adhere to and strengthen the party's leadership in various areas, and guide representatives from all ethnic groups and all walks of life using the innovative theory of the party," Han said. "It is an important platform, an important channel for resolving conflicts and building consensus on the basis of common ideology and politics, to transform the institutional advantages of the CPPCC into the efficiency of national governance, to build a moderately prosperous society in an all-round way and to promote the pursuit of transcendence in the new era.”