Looking at the newly opened expressway leading to the new airport in Ulaanbaatar, capital of Mongolia, Ukhnaagiin Khurelsukh, the country's prime minister, said: "We are very happy" with the country's first expressway project as "it can play a very good role. The quality is very good and it is of very high standard". 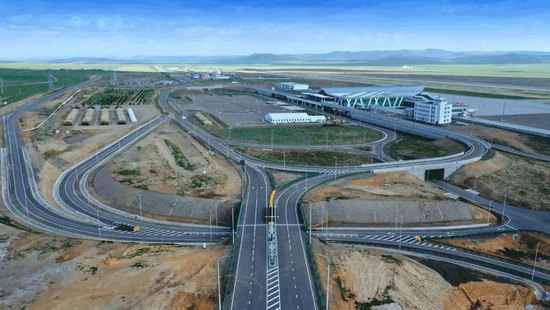 An aerial view of the newly opened expressway leading to the new airport in Ulaanbaatar, capital of Mongolia. (Photo: crec4.com)

The two-way, six-lane expressway, whose construction started on June 6, 2016, has the junction at the new international airport at one end and the Yarmag toll station at the other.

It is designed to withstand driving speeds of up to 80 km per hour, and passes through two counties in Central province and one district in Ulaanbaatar.

Zhang said the expressway is another key project in Mongolia built by CTCE and also a landmark project under the Belt and Road Initiative. The company had built the No 2 Highway and the Mongolian Development Center for Children with Disabilities there.

It is not just a "friendship project" completed and transferred to the Mongolian side by a Chinese enterprise at the 70th anniversary of the establishment of diplomatic ties between the two countries. It is also a symbol of deep friendship and sincere cooperation between China and Mongolia, Zhang said.

The expressway will mark a smooth link between the BRI and Mongolia's Steppe Road Program, which was unveiled in November 2014 to reinvigorate its economy through transport and trade.

The road can help reduce the travel time from Ulaanbaatar to the new airport, and increase the flow of logistics and passengers while promoting the local economy and related industries, Zhang said.

On July 5, Xing Haiming, the Chinese ambassador to Mongolia, joined Zhang and the Mongolian prime minister at a ceremony in Ulaanbaatar to mark the handover of the expressway to the Mongolian side.

In recent years, China-Mongolia relations have improved rapidly through mutual trust, high-level exchanges between leaders of the two countries, pragmatic cooperation and people's exchanges, he said.

The expressway itself is an economic cooperation project, but is also a bridge for the exchanges between the Chinese and Mongolian peoples and their friendship, Xing said. "I believe this expressway will make its duo contribution to the development of Mongolia's social and economic progress."

Since the start, CTCE builders adhered to a higher standard in building the freeway in accordance with the geological conditions of the Mongolian alpine region and Ulaanbaatar.

Sukhbaatar, 40 this year, was once a herdsman in Ulaanbaatar tending his 100-odd sheep at home, before he joined CTCE construction team in 2016 when more than 200 local staff were hired for the project.

"I was really hesitant at first, worrying that I might not live comfortably and cannot get used to the job, and that my work can be hindered due to the language barrier and poor communication," he said.

"But the first day on the project made all my worries disappear," Sukhbaatar said, adding that the few years' work made him feel the warmth of Chinese traditional culture and the "family culture" of CTCE.

Since many Mongolian employees participated in construction work for the first time and had no work experience, the CTCE management team meticulously taught them the work skills and explained to them the technical standards.

Through study, Sukhbaatar passed the project assessment and became a team leader who managed some 20 workers.

"I had a handsome income during the construction work. I grew up to be a team leader, from one who could only move bricks and transport materials," he said, adding that "they not only taught me the work skills, but also helped me in daily life. I love my Chinese colleagues, as we are brothers and sisters".

"China's assistance to Mongolia is sincere and selfless, and we welcome them here.

"Working with CTCE has changed my life, and I believe that with the business skills I learned from them, I can find another job soon. But my biggest wish is to continue working with a Chinese company, and hope to visit China in the future with my family members."