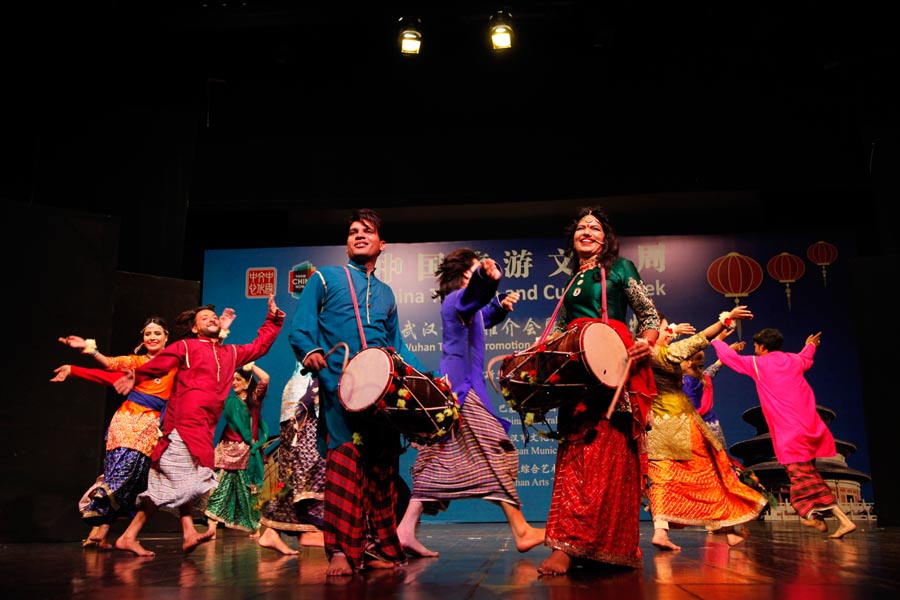 Artists perform a traditional Pakistani dance at the China Cultural Center in Pakistan, June 18, 2019, as part of the China Tourism and Culture Week. (Photo: Chinaculture.org)

ISLAMABAD -- China and Pakistan enjoy decade-long friendship since the two neighbors established diplomatic ties in the early 1950s, but cultural exchanges of the two nations can be dated back much earlier to the time of the ancient Silk Road.

History books record that over 1,000 years ago, revered Chinese Buddhist monks including Fa Xian and Xuan Zang travelled all the way to Pakistan to study Buddhism. In modern times, Chinese dramas and movies of Kung Fu have been screened every week at the country's national TV, enlightening Pakistanis about Chinese culture and traditions.

A whole generation of Pakistanis grew up watching Chinese Kong Fu movies of Bruce Lee and later on those of Jackie Chan. The kids born in the 1980s and 1990s have great interest in Chinese martial arts due to the action movies. The kids even nickname their scrappy fellows as "Bruce" to show their fondness for the Kong Fu star.

Stephen Chen trains dozen of such aspirants in a fitness club in a posh area of Islamabad. He speaks fluent Urdu to communicate with his students.

Fondly called as Master Chen by his students, the 42-year-old belongs to the third generation of a Chinese family living in Pakistan for decades. Born and bred in Pakistan, Chen loves the country, but his Chinese roots made him choose the profession for himself through which he is not only enkindling the spirit of learning martial arts in young Pakistanis, but also finding solace for himself by being connected to his Chinese background.

Master Chen calls himself a bridge between the cultures of Pakistan and China. Initially when he started training in the early 1990s, the response was very welcoming. At that time he could not afford to have a well-equipped club, and used to hold the training session at open ground, but he still had a big class of students and many of them have participated in and won medals at national and international level games.

Syed Basharat Hussain, one of the brightest students of the master, migrated from the southwest Balochistan province to Islamabad one year ago. Right after shifting to his new home, he joined the master's class.

"I am a fan of Jackie Chan and Bruce Lee since my childhood, so I naturally grew up with a fondness for martial arts. After shifting to Islamabad I was clear in my mind that I will get trained by a Chinese because he will teach me the authentic martial arts which I wanted to learn," the 14-year-old told Xinhua.

"And in just one year's time he trained me in many things specially in boxing, making me compete and win national level boxing championship."

Hussain was one of the very few in the country who directly got selected for national level boxing championship. "I was not so confident about my skills, but a week after joining the club, the master came to me one day and said that he saw a spark in me to do something big in boxing. I owe all my achievements to him. He goes with me on my every match."