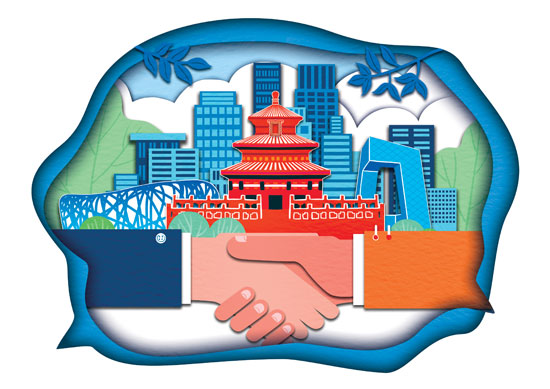 Use Belt and Road Initiative to revive historical relations

Around 1,000 BC, Central Asia was predominantly an Aryan region that included the Eastern Iranian-speaking (or Persianspeaking) people, Bactrians, Sogdians and Khwarazmians and the semi-nomadic Sakas and Alans, who had a great influence on the history of the region. Since the ancient Silk Road passed through Central Asia and Iran, the two places played a key role in the historical and cultural activities of the times.

During the Tang Dynasty (618-907), a Zoroastrian community moved from Persia to Central Asia, especially to Sogdiana (now in Tajikistan), and then through the Silk Road to China. Studies show the Iranian poets and writers who moved to China merged into the Chinese civilization. As a result, some of their works in the Chinese language show Daoist and Buddhist influence.

Manichaeism, founded by Iranian prophet Mani (c. 216-276), was influential in Iran, Central Asia, India and China, as well as in Mesopotamia, Turkey, Byzantium and the Roman Empire. Manichaean intellectuals were good not only at establishing trade and cultural relations with other communities but also at facilitating dialogue among civilizations.

The discovery of thousands pieces of manuscripts in Turpan in Northwest China's Xinjiang Uygur autonomous region show that some Iranian merchants and intellectuals along with their families migrated to China in the 9th century. Later, they moved to Quanzhou in East China's Fujian province and established a peaceful community, as well as trade and cultural ties with many other communities in the city, which was also called Zaytun or (City of) Olives.

So there is a need to revive the historical peaceful ties and renew our cultural and commercial cooperation, for instance, through the Belt and Road Initiative.

Abolghasem Esmailpour, an expert in mythology and a professor at Shahid Beheshti University, Teheran

The UNESCO constitution is a fantastic document which arms the international cultural institutions to hold dialogue among civilizations, especially a dialogue on how to look at others with tolerance and openness.

And the Belt and Road Initiative can provide a solid platform for such exchanges and thus create a more conducive environment for a dialogue of Asian civilizations, which in turn can help develop mutual openness and tolerance.

We live in an age of empires, which has obvious political implications; much less apparently, it also affects our ways of being in the world.

To share a world in which we can again think in terms of "all under heaven" indeed requires some adaptation. Diversity is a key word here. In the large, plural world we live in, no professional, scholarly, or intellectual commitment can any longer be confined to any one particular conceptual horizon. Personal and professional success will increasingly depend on our capacity of being familiar with a plurality of cultures.

This is particularly true of the plurality of heritages, cultures and histories that shaped the civilizations of Asia. As far as philosophy is concerned, for instance, scholars around the world are becoming increasingly aware of the distinctive contribution of Chinese and Asian philosophies to the conceptual, spiritual and scientific heritage of humankind.

Philosophy as well as the humanities can and do help us, regardless of our physical locations, cultivate the ability to merge our cultural roots into a larger citizenship in a way that would expand the boundaries of ourselves and make us better citizens of this world. This is indeed a time to look at our daily life as part of a larger "all under heaven", and to conceive it in all of its diversity of cultures, heritages and civilizations.

Asian countries began the community building process with the Bandung Conference in 1955, two years after the Korean War (1950-53), and accelerated it after the formation of the Association of Southeast Asian Nations in 1976, one year after the end of the Vietnam War. And they strengthened that process through the Belt and Road Initiative, which was proposed by President Xi Jinping in 2013.

As with regional projects in other parts of the globe, the Asian community building process, too, has two components－common interests (gesellschaft) and common culture (gemeinschaft).

The European integration project was necessitated by the common need of Western European countries to recover from the destruction of World War II and guard against Soviet "expansionism". Hence, the United States supported European integration project through the Marshal Plan, an alliance system to check the political influence of the Soviet Union. These common interests have been firmly associated with the countries' cultures which have common roots in Christianity and Pan-Europeanism which emerged after the end of World War I.

I have worked and travelled in India, Singapore, Malaysia, Vietnam and 28 of the provinces and regions of China. I have seen first-hand the richness and diversity of Chinese and Asian cultures.

Through my many journeys, I have also seen how Asia, led by China, has "reformed and opened up". The outcome of these advances has been profound. For example, China has already lifted more than 700 million people out of poverty and is committed to eliminating absolute poverty by 2020.

One would expect the US and Europe to welcome these positive changes in China and Asia. Yet the fact is otherwise, probably because of a lack of proper communication. Media outlets outside of China do not reflect what I see around me in China, where I spend six months in a year. As a European and a British citizen, I can say Europe is still ignorant about Asia and China.

That's why I welcome the Conference on Dialogue of Asian Civilizations. It provides a great opportunity for discussions on how to improve communication between Asia, China, the US and Europe,

The digital revolution could be a core driver of innovative communication from China. In other words, the same message can be conveyed in a different, friendly style and format. For example, Chinese websites, which are typically text dense, can lean from European and US websites and create more images to make their message more presentable and readable. And the conference could be a "game-changer" in this regard.

All nations must join hands to solve major global problems

A clash of civilizations, in my opinion, takes place only when civilizations have little knowledge of each other and share few common interests. In this age of information, almost any information is a click away. But barriers such as language, fake news, lack of direct media channels, political manipulations and other factors still prevent civilizations from truly understanding each other.

A country will defend its interests against threats while welcoming any support from friendly countries. "Identifying friend or foe" is thus critically important for a country to correctly assess the situation, which can be done only by gathering information from authentic sources.

The world is grappling with a host of problems such as the socio-economic gap, environmental degradation, armed conflicts, terrorism, transnational crimes and illegal migration. These problems can be solved only through cooperation and synergy among all countries, not by any one country alone.

So all countries should work together to address these problems. And since the dialogue of Asian civilizations is aimed at developing better connectivity and communication between the participating countries, it can help them to join hands to address the common problems.

The real art of living signifies all people living peacefully

We hope the Conference on Dialogue of Asian Civilizations will help the world understand once and for all that Asian and Chinese civilizations are an integral part of world civilization, and that they have greatly influenced human progress.

Since it is not humanly possible to cover all aspects of civilizations in a weeklong dialogue, we should try to achieve the following:

Most relevant information should be selected from the more than 1,500 entries tracing the history of major world civilizations. While selecting the relevant facts, objectivity should be uppermost in the minds of the experts. And despite the limited period of the dialogue, we should try to present the background, progress and results of historical events, and the contributions and influences of the outstanding figures and their times.

The Confucian concept of "harmony without uniformity" highlights the "beauty of diversity", which is the reality of nature and thus humankind. And the real art of living is in people of all creeds, colors and cultures living peacefully together.

Asian values based on concept of mutual benefit

Asian values, on the other hand, are based on non-duality. Yin and yang in Chinese, and atman (self) and brahman (highest reality) in Sanskrit are the same concepts. There is no duality, but a prior unity that evolves into derivatives of multiplicity that are interconnected, multi-dimensional and always interactive and synergistic.

This comes down to a core difference in values. In Western thinking man can overtake nature. In Asian thinking man is only a small part of nature, a conduit between heaven and earth, not a force to try and alter the environment.

The success of the Asian economic models from China to Vietnam to Malaysia can be attributed to the fact that no ideology is applied to economics. It is about using the tools of market and planning in a practical way to get the job done. Likewise, Asian values have created a politics of consensus rather than a zero-sum game. Asian politics is all about consensus. No side wins or loses; all sides move forward together.

Azerbaijan contributes to dialogue of civilizations

Asia is home to some of the largest economies in the world, from China, Japan and India to the Republic of Korea, Indonesia and Thailand. But thanks to its new model of socio-economic development, the Chinese economy has its own salient features. These features have allowed China to rebuild a number of traditional structures to achieve unprecedented socio-economic results, which in turn have helped it to withstand external pressure and preserve its distinctive culture. Still, China's economic development model is evolutionary, as it has helped modernize all social structures while preserving the Chinese civilization's core elements.

In this regard, the experiences of Azerbaijan also deserve attention. True, Azerbaijan is a small country and has limited human resources potential. But, being located at the crossroad of Europe and Asia, it occupies a very important geographical position. Azerbaijan is located in the east of the Caucasus, and shares land borders with Russia in the north, Turkey, Georgia and Armenia in the west, and Iran in the south. It is also one of the five Caspian states and shares sea borders with Russia, Kazakhstan, Turkmenistan and Iran.

Moreover, Azerbaijan espouses that economic interaction and cooperation can be effective only when supported by active dialogue in the scientific, humanitarian and political spheres. As such, it is contributing to the establishment and development of humanitarian cooperation between countries and continents.

Azerbaijan also remains committed to enhancing international cooperation and understanding between countries and peoples, and contributes to the dialogue of cultures and civilizations.

Akif Alizadeh, president of the Azerbaijan National Academy of Sciences