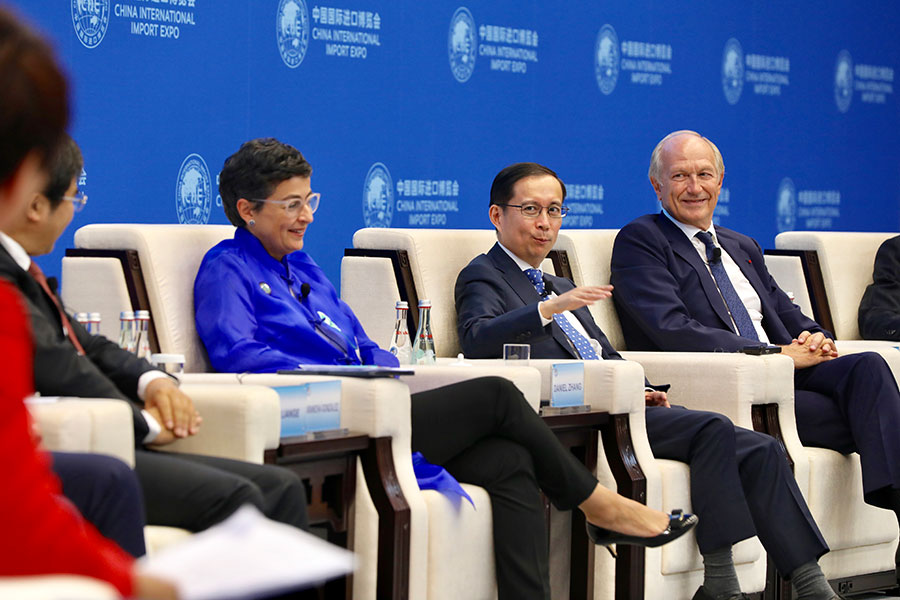 Daniel Zhang (second from right), CEO of Alibaba Group, speaks during a parallel session on the theme "e-commerce in the digital era" at the second Hongqiao International Economic Forum in Shanghai on Tuesday.(Photo: China Daily)

China is presenting a vivid playbook of e-commerce and data application that has pioneered some of the world's top-notch digital innovation practices, according to speakers and panelists attending the second Hongqiao International Economic Forum.

Acknowledging China's advancements in the digital wave, experts at a parallel session on the theme "e-commerce in the digital era" also called for more joint actions globally to narrow the digital gap by making technologies more inclusive.

Italy is looking to provide a bridge from its small and medium-sized enterprises to major Chinese e-commerce platforms in the hope of riding China's consumption and e-commerce boom, said Italian Minister of Foreign Affairs Luigi di Maio.

"We are on course to sign a memorandum of understanding with JD, a major Chinese online shopping platform, in order to provide Chinese consumers easy access to a quality Italian lifestyle," the minister said through a translator.

Being a small but rather open economy, Hungary upholds free and fair trade, and regards speed as a crucial factor defining competitiveness, said Peter Szijjarto, Hungary's minister of foreign affairs and trade.

To this end, the country values the development of e-commerce, notably with China, which shortens time and distance by bridging markets, he said. He touted China's role in fueling Hungary's digitalization, citing examples of Huawei in the construction of 5G to help Hungary stay at the forefront of such cutting-edge technologies and keep the nation ahead of the curve.

Global companies are looking to ride China's digitalization wave. French pharmaceutical giant Sanofi has joined up with Ali Health, an online healthcare portal where users can trace products, enhance awareness or find a nearby drugstore, said CEO Paul Hudson, adding it is eyeing cross-border e-commerce to better tap into this digital-savvy demographic.

China itself is perhaps the most thriving market for L'Oreal to employ technologies and online channels for marketing and sales, said Jean-Paul Agon, the company chairman and CEO.

"Gross merchandise volume is no longer our only, or even top pursuit," said Daniel Zhang, chairman and CEO of Alibaba. "Rather we are looking at strengthening data capabilities, cloud computing power, and logistics networks to weave a digital 'Belt and Road' for the welfare of more people".