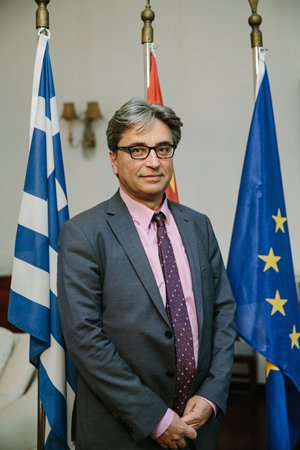 Greece became a full member of the cooperation mechanism between China and Central and Eastern European Countries in April, expanding the previous 16+1 cooperation mechanism into 17+1. Bilateral relations have entered into a new era with a more dynamic cultural and economic partnership. China and Greece are now considering the possibilities of expanding cooperation in the education field. What are the new educational programs that we can expect? How will the two sides enhance cooperation? Global Times reporter Xie Wenting (GT) spoke with Dr Apostolos Dimitropoulos (Dimitropoulos), Secretary General for Higher Education, Ministry of Education & Religious Affairs in Greece who has also served as an education expert at the European Commission and UNESCO.

GT: How do you evaluate the current state of educational exchanges and cooperation between China and Greece?

Dimitropoulos: There was a cultural agreement between the two countries in 1978. Ever since then there have been multi-annual implementation programs of this agreement.

The cooperation is growing and definitely we can do much more. We are currently in the process of negotiating the details of a cooperation program for the period from 2020 to 2023 with Chinese authorities. We are doing our best to finalize it as soon as possible. There was a delay because of the election in Greece. We are now rushing and trying to finalize the agreement, which will be the framework for the cooperation with China in the coming years.

We also want to further expand cooperation among Greek and Chinese universities. One of the new developments in Greece is that for the first time we are going to have an undergraduate program in English language, which would be open to students from other countries, and particularly to Chinese students interested in Greek culture, history and archaeology.

Greece went through an economic crisis and it is now recovering from it. The government has a growth strategy in order to further boost the economy. Part of the growth strategy is to reform the education system and part of the reforms in education is reforming higher education as a priority. Greek universities will open to the wider world and strengthen their international profile. That fits with the 17+1 Initiative and the Belt and Road Initiative. We envision an increasing number of Chinese students coming and studying in Greece and Greek students studying in China.

GT: Are there any new areas in education and people-to-people exchange that need to be further explored?

To enhance cooperation and exchange, we should start with more activities at the school level. And new technologies can help us a lot on that. We can set up some networks between Greek schools and Chinese schools where small kids can see each other and exchange even a few words.

GT: What are the new measures Greece will take to attract more Chinese students? What are the advantages of Greek universities?

Greek universities have certain advantages that make them quite attractive. First of all, Greece is a member of the EU and it participates in the European Higher Education Area. That means that all universities are evaluated by external agencies for their quality standards. These external agencies apply the same standards and guidelines across Europe. So an undergraduate or graduate qualification from Greek universities is recognized throughout Europe and the rest of the world.

Second, there are different ranking systems for the quality of universities around the world. The EU has supported the development of the EU Multirank system. Greek universities perform well in these rankings.

Besides, Greece is a safe country. Athens is one of the safest capitals in Europe. Safety is important for the students themselves but also for their families. Apart from it, Greece is a culturally-rich country. So it's an enriching experience to study in Greece.

Finally, something that we should not underestimate is the excellent weather. Greece has a mild winter and a beautiful and long summer. That is something that makes life for students really enjoyable.

Dimitropoulos: We know you have a national exam and we have a similar system in Greece to enter the university. I heard about the details of it and it's quite similar. There will be special arrangements for admissions for students coming from other countries.

According to the European legislation, students from other European countries are treated in an equal way. But for students outside Europe, we will have special admissions arrangements. The scores from the national exams will be taken into account by the universities before they admit students from China or any other foreign country.

There is nothing like what is being reported or mentioned [by some Western media and countries]. On the contrary, we really want to get to know more about Chinese culture. And we want more cooperation and more mobility of students as well as academics between the two countries. So we need more people to learn Chinese language and to get to know China better. Definitely the Confucius Institute and language learning is not a threat.