As well as hunting for signals from alien life, the largest and most sensitive radio telescope ever built will search for extra-solar planets, or exoplanets, which have magnetic fields like Earth, within 100 light-years from Earth.

Astronomers from countries including China and France recently published their ambitious observation plan using the Five-hundred-meter Aperture Spherical Radio Telescope (FAST) in the academic journal Research in Astronomy and Astrophysics. 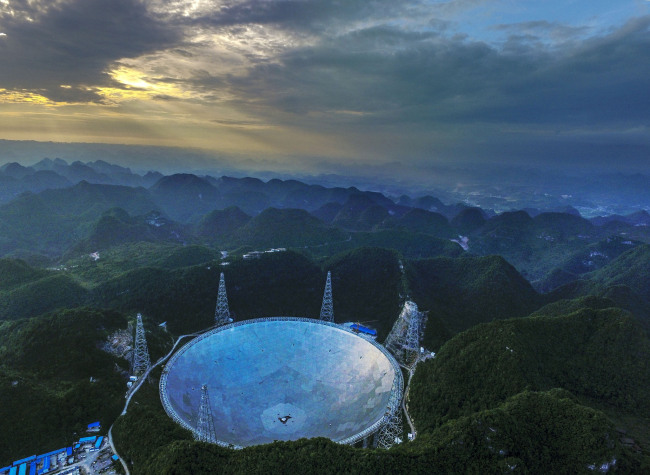 Li Di, a researcher at the National Astronomical Observatories of the Chinese Academy of Sciences and chief scientist of FAST, said scientists are more concerned about habitable planets, which should have not only water, a suitable temperature and atmosphere, but also magnetic field.

"The earth's magnetic field protects life from cosmic rays. There is a scientific bug in the sci-fi blockbuster 'The Wandering Earth,' that is, the earth stops rotating. If that happens, the magnetic field would disappear. Without the protection of the magnetic field, the earth's atmosphere would be blown off by the solar wind. As a result, humans and most living things would be exposed to the harsh cosmic environment and unable to survive," said Li.

Philippe Zarka, an astronomer from the Paris Observatory, said planets are the most favorable cradle of life. As of today, about 4,000 exoplanets have been found.

There are six magnetized planets in the solar system with a planetary-scale magnetic field: Mercury, Earth, Jupiter, Saturn, Uranus and Neptune.

The first exoplanet was discovered near a pulsar by means of radio astronomy. But that is a very special case. Except for that, all the exoplanets found so far were discovered through optical astronomy or infrared imaging, according to Li.

Those discoveries have led scientists to believe that almost all the stars in the Milky Way have planets resolving around them. And there must be plenty of habitable planets.

"In our solar system, the high-energy charged particles in the solar wind and the electrons from some planets' moons would have interaction with the magnetosphere of planets, generating radio radiation," said Li.

"All the planets with magnetic fields in our solar system can be found generating such radiation, which can be measured and studied by radio telescopes. But research on the planets' magnetic fields cannot be realized through optical and infrared astronomical observation.

"Do the exoplanets have magnetic fields? If they have, they should also generate radio radiation under the influence of the wind of their parent stars," Li added.

Astronomers have been looking for radio signals from exoplanets, but with no discovery yet.

"We want to try with FAST, which is the world's most sensitive radio telescope. If we can for the first time detect the radio radiation of an exoplanet and confirm its magnetic field, it would be a very important discovery," said Li.

"If this observation window is opened, we would be able to study the laws of the magnetic fields of exoplanets and whether they are habitable in another aspect," he said.

Most exoplanets have been discovered by the US Kepler space telescope. Those exoplanets are located away from Earth at a distance of more than 500 light-years.

"If TESS could find a large number of exoplanets, and we also track them, the possibility of discovering exoplanets with magnetic fields will increase," Li said.

"We are looking for exoplanets within 100 light-years from Earth. Once such planets are found, it would be favorable for scientists to conduct a thorough study of them, and there is even possibility for interstellar migration."

Located in a naturally deep and round karst depression in southwest China's Guizhou Province, FAST was completed in September 2016 and is due to start regular operations in September this year.

The performance of the telescope during commissioning is beyond imagination, said Li.

A team of astronomers from more than 10 countries and regions are making observation plans for FAST, in order to best apply the unprecedented power of the telescope, going beyond what has been done by other telescopes in the past.

They have proposed ambitious observation objectives through the telescope, such as gravitational waves, exoplanets, ultra-high energy cosmic rays and interstellar matter, to advance human knowledge of astronomy, astrophysics and fundamental physics.

"Planning new observations to find new targets and new kinds of objects beyond the reach of existing facilities is one of the most exciting jobs of a professional astronomer," Li said.

Scientists believe more discoveries that exceed expectations will be made with FAST.

"As these observation projects will be launched over the next few years, FAST will have an impact on many areas of astronomy and astrophysics around the world. Although we cannot predict what it will discover, the telescope may profoundly change our understanding of the universe," Li added.