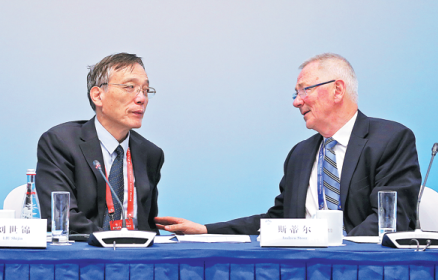 Liu Shijin (left), Chinese chief adviser of the China Council for International Cooperation on Environment and Development, and Andrew Steer, president and CEO of the World Resources Institute, talk at the forum on Sunday. (Photo: China Daily)

Experts called for advancing the "green" Belt and Road Initiative at the ongoing 2019 annual general meeting of the China Council for International Cooperation on Environment and Development.

Shi Yulong, director-general of the China Center for Urban Development at the National Development and Reform Commission, told a parallel forum on the BRI and green urbanization during the meeting that a core concept of the initiative is cooperation for development.

To date, nearly 130 countries and 29 international organizations have signed BRI cooperation documents with China, according to the director.

A new World Bank study found BRI-related cooperation will help reduce the cost of global trade by 1.1 to 2.2 percent, slash the cost of trade in the China-Central Asia-West Asia economic corridor by 10.2 percent, and boost global economic growth by at least 0.1 percent in 2019.

Shi noted the significance of aligning the BRI and the UN 2030 Agenda for Sustainable Development.

"Enacting principles to ensure new projects are green from the start," he said.

"Enforcing environmental regulations in host countries needs to be incorporated into the local conditionality."

The green BRI development also includes understanding the role that digital BRI can play, implementing projects which are demand-driven, sustainable and engaging in concrete environmental projects, he added.

The China Center for Urban Development has cooperated with the UN-Habitat, the World Health Organization, the United Cities and Local Governments Asia Pacific, Eurocities and the Energy Foundation to found the Belt and Road Sustainable Cities Alliance.

The alliance focuses on cities' role in promoting sustainable development under the umbrella of the BRI.

A report released by the CCICED at the meeting shows that China has signed an agreement on green investment on the BRI with major global financial centers, including the United Kingdom, France and Singapore.

The Chinese government has pledged to continue offering training in environmental protection to 1,500 government officials from BRI-involved countries and regions in the next three years.

The report suggested green and low-carbon development should be a fundamental principle to promote Belt and Road and South-South cooperation.