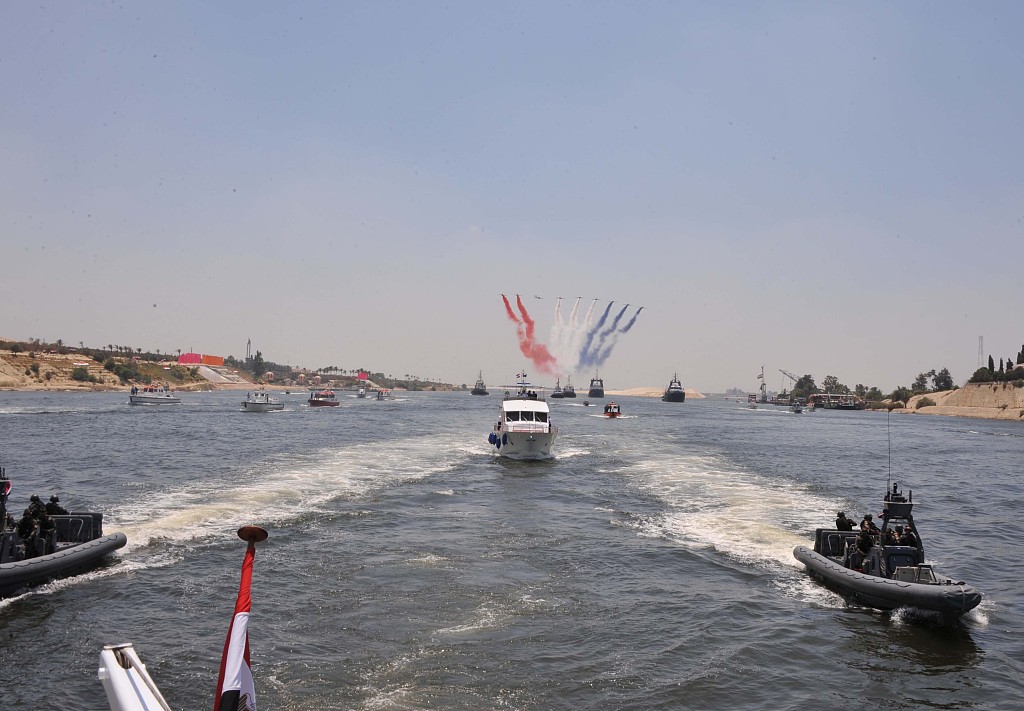 ISMAILIA, Egypt, Aug. 6 (Xinhua) -- The revenues of the Egypt's Suez Canal reached 5.9 billion U.S. dollars in the fiscal year of 2018-2019, an all-time record in the waterway's history, Chairman of the Suez Canal Authority Mohab Mamish said on Monday.

"The canal made 5.9 billion U.S. dollars in fiscal year of 2018-2019 with 300 million dollars or 5.4 percent increase compared to the previous fiscal year, which starts in Egypt in July and ends in June," Mamish said in a press conference to celebrate the fourth anniversary of opening the new branch of the Suez Canal.

He added that the traffic passing through Egypt's Suez Canal on Aug. 2 reached an all-time record registering the highest tonnage per day with 81 ships carrying 6.1 million tons of load passing through the canal.

He highlighted the canal is now ready to receive the largest ship in the world, Megamax 24, that carries 23,000 containers.

The new channel in the Mediterranean and Red Sea is 9.5 kilometers long and 18 meters deep aimed to reduce navigation time for ships to 11 hours from about 18-22 hours and cut vessels' waiting time to three hours from a previous delay of eight to 11 hours.

The new channel was opened in 2015 amid doubts about the feasibility of the project in light of the wobbling global economy and instability in the Middle East.

Some 70,679 ships with record 4.268 billion tons have crossed the canal since its inauguration, Mamish added.

He said that new development projects and upgrade of the canal helped improve its performance and achieve these revenues.

Mamish explained that the new channel's importance was not only about navigation, but also paved the way for building other related giant projects like the tunnels that connect three canal cities, namely Suez, Ismailia and Port Said, as well as Sinai Peninsula.

The tunnels, two of which were built under the canal, will facilitate the development of the Suez Canal Corridor Area Project, which was launched in August 2014 and aimed to increase the role of the Suez Canal region international trading.

Some of the revenues will be used in building 100 fishing ships to create more jobs, Mamish said.

Some 12 percent of the world trade volume passes through the Suez Canal which is considered the most important and fastest navigation passage connecting Africa, Asia and Europe by bridging the Red Sea and the Mediterranean Sea.