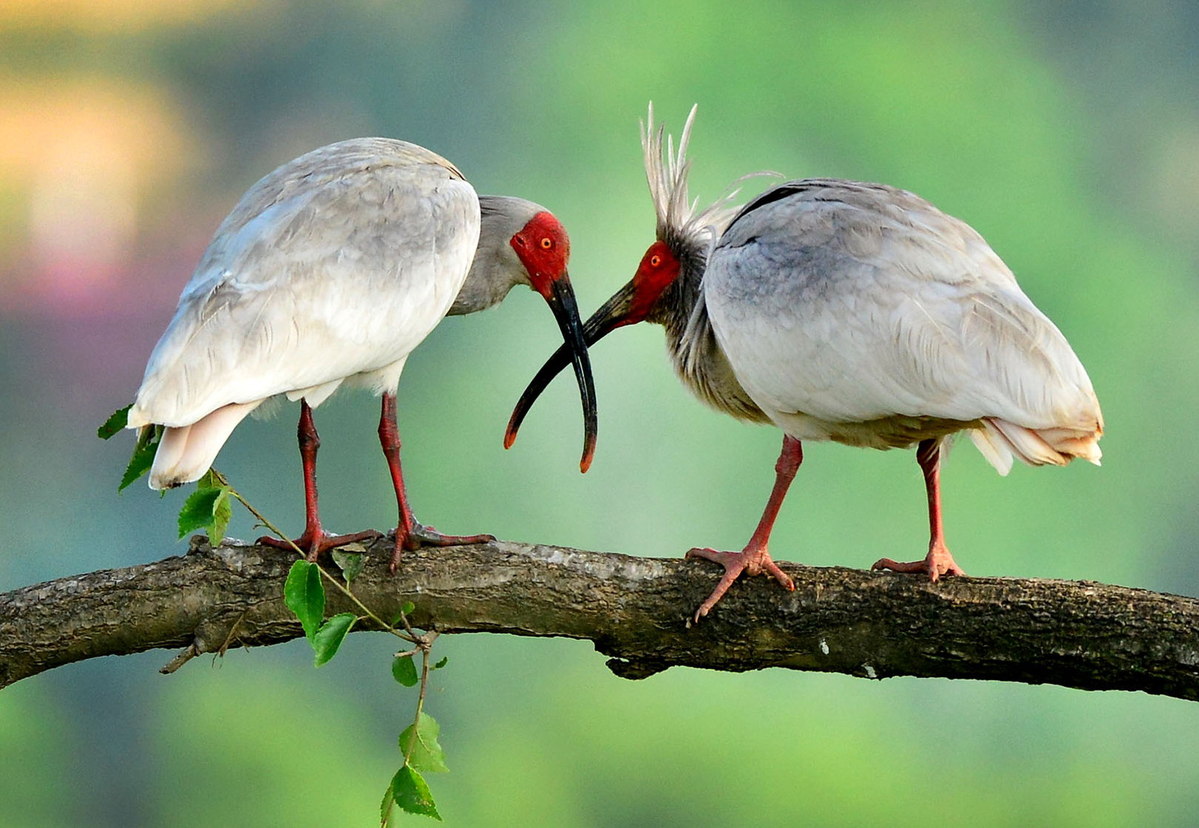 The crested ibis, an endangered bird known as "the oriental gem "that was once thought to be extinct, has witnessed stable population growth, rebounding to 5,000 worldwide after decades of steadfast conservation efforts, forestry authorities revealed on Monday.

The crested ibis－widely believed to bring luck in China－used to be designated on the International Union for Conservation of Nature's red list as "critically endangered "due to its extremely low population, which was only seven in the 1980s.

"Strong protection efforts in the past decades helped to boost its population. Now, there are more than 5,000 crested ibises worldwide. Of them, about 4,400 are in China, with 4,100 in Shaanxi province," said Dang Shuangren, director of the Shaanxi Forestry and Grassland Administration.

The administration released a report on Monday, which shows that the habitat of the species has expanded from only 5 square kilometers in the 1980s to 15,000 sq km currently.

The bird once existed in many regions in the world, including China, Japan, southern parts of Russia and the Korean Peninsula. However, it had seen a sharp population decline due to human activities such as urbanization and pollution.

In 1981, Yangxian county in Shaanxi reported seven wild crested ibises, the only wild population in the world at the time. The report said the birds can now be seen in six cities and towns along the Qinling Mountains.

"Since the first captive-bred crested ibis was successfully released in the wild in 2013, we've received reports on the existence of the birds in regions outside Shaanxi, such as cities along the Yellow River," Dang said.

As the birds mainly live in the Qinling Mountains in Shaanxi, the province has built several natural reserves in Qinling since 1965.Since 1999, commercial logging has been banned in the region, and an environmental protection regulation dedicated to the area was released in 2007.

Further, the Xi'an-Chengdu High-speed Railway, which began operations in 2017, was constructed while taking into account the crested ibis protection. The line travels less than 1 km through the region where crested ibises sometimes fly, but protective nets were built along 17 km of track to prevent any damage to the birds. The 4-meter-high nets on both sides cost nearly 50 million yuan ($7.06 million).

Apart from strengthening protection methods, Shaanxi has also attempted artificial breeding since the 1990s. Now the captive-bred crested ibis is in its 10th generation, according to the report. It also said the province currently owns two breeding bases, five rescue centers and eight training centers to facilitate the birds' entry into the wild. In addition, the province's crested ibis natural reserve is now under state protection.

The Chinese government has lent a total of 14 crested ibises to Japan and South Korea since 1985, and the two countries currently have a total of about 900 crested ibises, according to the report.

In a proposed list of wild animals under state priority conservation, which was released by the National Forestry and Grassland Administration and the Ministry of Agricultural and Rural Affairs last week, the crested ibis remains under the first-level protection.