Excavation of a water diversion tunnel completed in Nepal

Kathmandu (People's Daily) – The excavation of a 12.2-kilometer-long tunnel for a large water transfer project in Nepal, built by a Chinese company, was completed on Tuesday, nearly one year ahead of schedule.

Nepal's Ministry of Energy, Water Resources and Irrigation held a ceremony at the tunnel's exit in Chiple village in Surkhet district, Karnali Province. 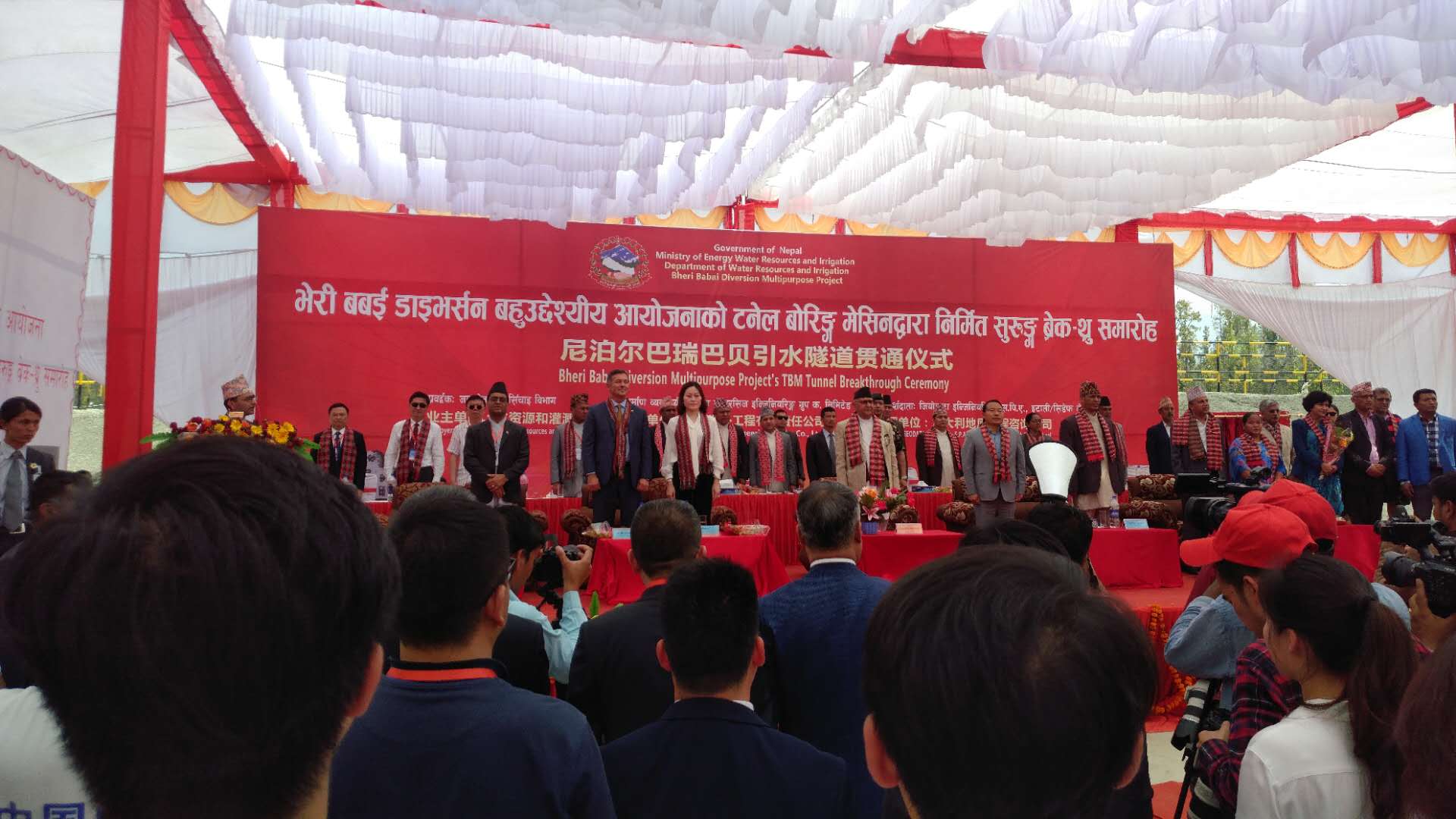 The Bheri Babai tunnel in Nepal, undertaken by the contractor China Overseas Engineering Group Co Ltd (COVEC), started construction in 2015 to divert the water from the Bheri River to the Babai River.

The project is a source of national pride in Nepal that has drawn a lot of attention. It consists of three sub-components: the Headworks, Headrace Tunnel (HRT) and the powerhouse and accessories. After completion, the Bheri Babai Diversion Multipurpose Project will help irrigate 51,000 hectares of agricultural land and produce 48 megawatts of electricity. 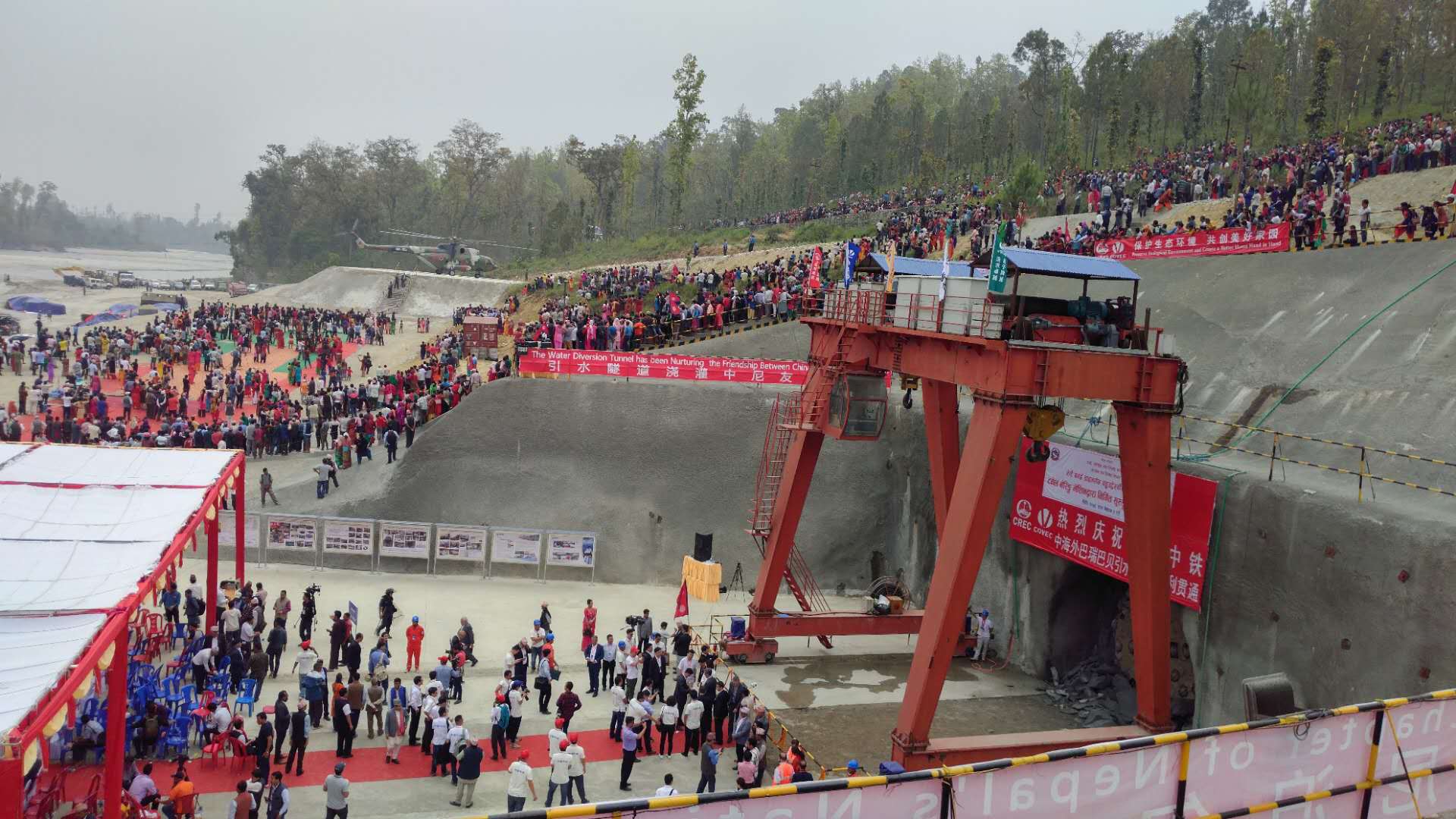 This project has set many records in the history of Nepal's engineering projects. It is Nepal's first inter basin water transfer project, the first project to successfully apply tunnel boring machine technology, and the first to overcome the geological difficulties of the Siwalik strata and successfully cross the Bheri fault zone.

Since the commencement of work on June 4, 2015, the contractor team has made many efforts in order to ensure smooth the construction, including widening roads, building their own power stations and diesel storage areas, building their own production line for sand and gravel, and setting up the first segment yard in Nepal to make the pieces of the tunnel.

In September 2017, the assembly and commissioning of the tunnel boring machine was completed within only 14 days. Under the careful organization and operation of the contractor, the excavation of tunnel proceeded smoothly and rapidly, and the machine crossed the Bheri fault zone successfully and safely.

The statistics show the average monthly advance of the Double Shield tunnel boring machine ranks among the best in the world.

COVEC has always adhered to the core values of "integrity and dedication, co-construction and sharing," attaching great importance to the protection of the environment, fulfilling social responsibility, improving the surrounding people's livelihoods and hiring locals to join in the construction.

During the construction period, COVEC donated a total of 781 sets of schoolbags and teaching aids to local schools jointly with the China Foundation for Poverty Alleviation.

The company has also built more than 10 kilometers of roads for local villages, dug more than 30 wells for local schools and villagers, created more than 2,000 jobs and helped cultivate a large number of Nepalese workers.

The project has also significantly driven the economic development of the surrounding villages where farming, retail, catering and housing rental services have boomed over the past four years.