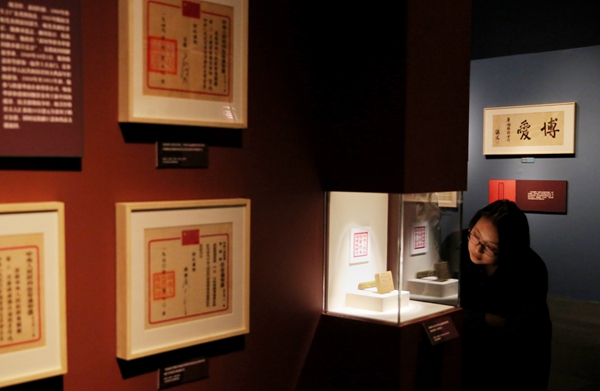 An ongoing exhibition at the National Museum of China reviews the contribution made by overseas Chinese. (Photo: China Daily)

Among those people who attended the founding ceremony of the People's Republic of China on Oct 1, 1949, there were many overseas Chinese who had, in different ways, contributed to the nation's independence and the birth of New China, such as Tan Kah-kee (Chen Jiageng), an entrepreneur active in Southeast Asia and a leader of overseas Chinese communities, and Luo Lang, who returned from Malaysia and conducted the army orchestra at the ceremony.

An ongoing exhibition at the National Museum of China (through Nov 29) looks in detail at the devotion of overseas Chinese in contributing to the progress of their ancestral home, starting from the Xinhai Revolution that ended China's feudal monarchy in 1911.

Nearly 300 exhibits, including photos, letters, diaries, badges, historic documents and daily-use objects, are largely from the collection of the Overseas Chinese History Museum of China, while some were donated to the National Museum.

Chen Yongsheng from the All-China Federation of Returned Overseas Chinese says the first part of the exhibition title, xing yuan, literally meaning "traveling afar", illustrates "an emotional attachment between overseas Chinese and their land of descent" despite the geographic distance.

"The second part of the exhibition title, tong meng (a shared dream), expresses the common wish for the great rejuvenation of the Chinese nation," Chen says.

Chen's federation operates the Overseas Chinese History Museum of China, a national-themed museum opened in 2014 to trace the immigration history of the Chinese throughout centuries until today.

The museum has built up a collection of 32,000 exhibits, which are mostly donated by overseas Chinese communities, hoping their stories can be recounted to the wider population, Chen says.

The exhibition hails those prominent figures who returned to China from abroad, including Qian Xuesen, the late cyberneticist.