BRI NEWS Exhibition of the millennium

Exhibition of the millennium 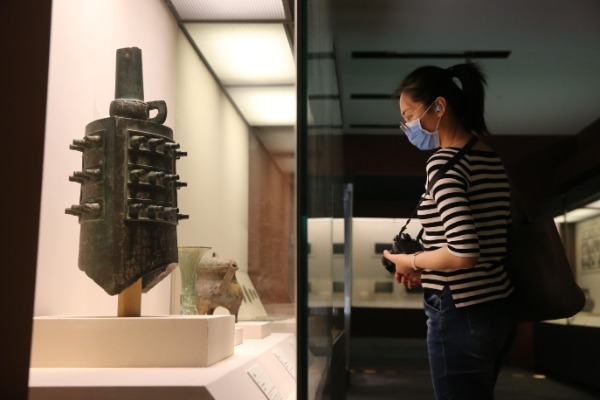 A visitor inspects relics displayed at a Confucius culture exhibition at the National Museum of China on May 1.(Photo: Agencies)

A View of Zhenshang Studio by Ming Dynasty artist Wen Zhengming is on display at the museum.[Photo provided to China Daily]

A section of the 10-meter-long A Scroll of the View of Wangchuan Villa. [Photo provided to China Daily] 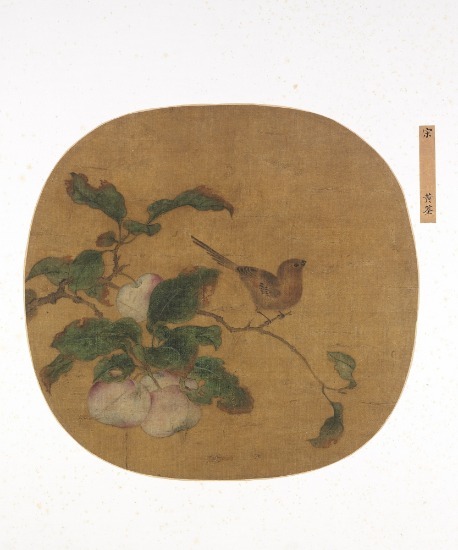 A Fruitful Crabapple Tree, a silk fan painting of flowers and birds by an anonymous Song Dynasty artist is on show. [Photo provided to China Daily] 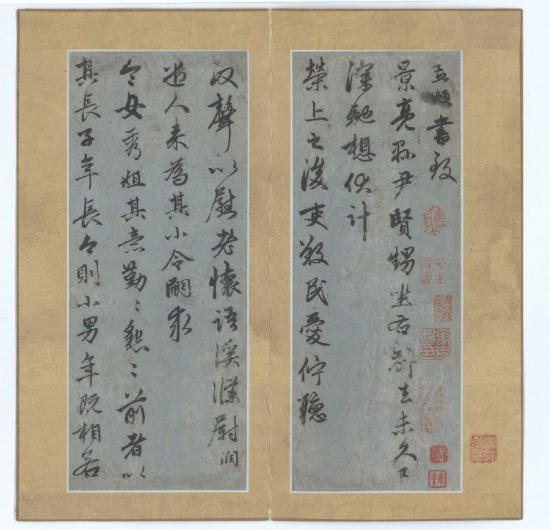 The first page of a Letter to Jingliang by master painter and calligraphy Zhao Mengfu is on show.[Photo provided to China Daily] 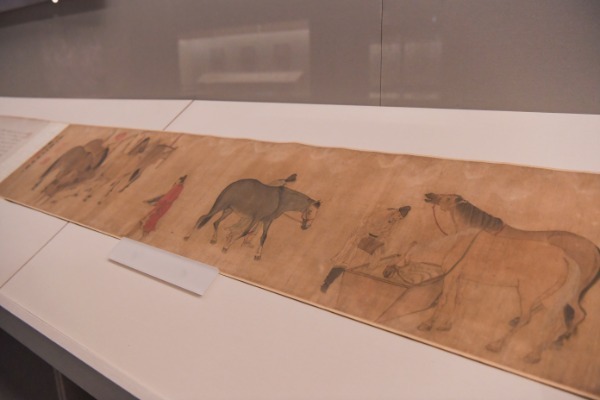 Highly-rated historical dramas have become an additional channel to promote China's glorious past, arousing a great deal of public interest in the events, figures, arts, culture and social norms of the featured periods. The Longest Day in Chang'an, for example, a 2019 suspense drama, brought the zenith of the Tang Dynasty (618-907) into the limelight.

Now, public enthusiasm has been ignited for the Song Dynasty (960-1279), thanks to the popularity of Serenade of Peaceful Joy, a series currently airing online and on TV which revolves around the life of Emperor Renzong. Every aspect of social life during the dynasty is laid out before the eyes of the viewer through the costumes, props and makeup. The distinguished hat worn by Song Dynasty officials, which features two elongated protruding side flaps, has even inspired people to make similar headwear as a way to keep social distance in the wake of the prevailing pandemic.

Paintings and calligraphy are no doubt one of the dynasty's greatest legacies, which the drama celebrates by using examples of them to decorate the walls and screens in the imperial court and the residences of the upper class.

Meanwhile, at the National Museum of China, people can also enjoy the real artistic brilliance of the Song Dynasty by visiting the permanent exhibition, Classical Painting and Calligraphy of Ancient China.

The exhibition gathers 52 artworks from the National Museum's collection, which navigate the evolution of classical Chinese ink art since the 10th century, beginning with the Song Dynasty, through to the early 20th century and the fall of the Qing Dynasty (1644-1911).

Song-era works are among the most precious on show given the rarity of the pieces still in existence. One highlight is A Scroll of the View of Wangchuan Villa by an anonymous painter. The monochromatic painting is a copy of the same-titled landscape by Wang Wei, the great Tang poet and painter who is recognized for establishing a painting style that emphasized personal expressions over figurative representations.

The Song Dynasty copy measures nearly 10 meters, and it is the first time the public can enjoy a full view of the piece.

Wangchuan Villa, seated on the outskirts of Tang's capital Chang'an－modern-day Xi'an of Shaanxi province－boasts picturesque scenery and was where Wang retired in his later years. He composed poems and made paintings to hail its breathtaking views. Chen Qingqing, the exhibition curator of the national museum, says that the original work by Wang is believed to be no longer in existence and that the shown piece is one of the finer copies produced by painters of later dynasties.

Other known copies include that of another anonymous artist which resides in the collection of Seattle Art Museum and one by Qing Dynasty painter Wang Yuanqi, which is housed at the Metropolitan Museum of Art in New York.

Other Song works on show include a silk fan painting of flowers and birds, A Fruitful Crabapple Tree, which presents the refined strokes and elegant palette that were typical of the works created at the Song court's painting academy.

Also on display is a calligraphic piece written in the cursive caoshu script by Wen Tianxiang, the patriotic and righteous scholar-general who lived during the 13th century and is a household name in China. It is said to be one of the three calligraphic works attributed to Wen.

The exhibition brings together almost all of the important figures of Chinese painting and calligraphy, such as Ren Renfa (1254-1327), a representative of the group of artistic officials that run through Chinese art history.

While Ren was a senior official serving at the court of the Yuan Dynasty (1271-1368), his five-decade career in the government started with sorting documents. He was later promoted for his excellent work in water control and, ultimately, became a high-achieving irrigation expert.

Any museum dreams of owning a piece of art by the master painter and calligrapher Zhao Mengfu, a scholar who lived during the Yuan Dynasty and a descendant of the Song imperial family. Among the National Museum's collections, there is a calligraphic piece by Zhao which is also on show.

A Letter to Jingliang, consisting of two pieces of paper, was a private letter Zhao wrote to his nephew Zhang Jingliang. In the letter, Zhao wrote that he was acting on behalf of his friend Pu Run in expressing a wish to match Zhang's daughter with Pu's son.

The letter is more personal and carefree, rather than a formal piece of writing. "It is also full of variety in the style of characters," notes Chen, "and is considered a dexterous piece honed by Zhao in the late stage of his career."

The national museum temporarily closed its doors on Jan 25 as part of measures to curb the spread of coronavirus. It reopened on May 1 under strict conditions, including pre-ordered ticket holders only, and a daily cap of 3,000 visitors.

Gu Bo, who works at a tourism company in Beijing, was among those who visited the National Museum on the day it reopened. She says she was most impressed by the first national flag of the People's Republic of China, which is on display at the ongoing Stand in the East exhibition. It shows objects and works of fine art marking the founding of the PRC.

Gu says she was surprised by the flag's size. Measuring 4.6 meters in length and 3.4 meters in height, the flag was raised at the PRC's founding ceremony on Oct 1, 1949.

"Looking at it, I couldn't help but recollect the experience of attending the flag raising ceremony at Tian'anmen Square when I was a little girl," Gu says, "I felt overwhelmingly touched."

She says she also enjoyed The Uniqueness of Zhou Dynasty Artifacts exhibition, showing a selection of objects excavated from the tombs in Chengcheng county, Shaanxi province.

"An archaeological site is recreated at the exhibition to show us the conditions under which the artifacts were unearthed," Gu says. "The scene reminded me of the tomb raiding-themed drama Candle in the Tomb: The Lost Caverns."

The national museum is currently hosting 17 exhibitions and people can also enjoy their diversity as a virtual experience, by visiting the museum's website and WeChat account. The museum is also presenting an exhibition hosted entirely online. Dongfanghong Forever reviews half a century of Chinese accomplishments in the aerospace sector.