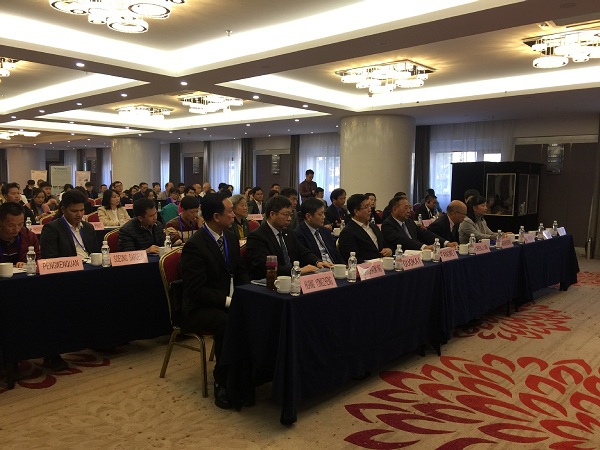 Experts highlighted the importance of the non-governmental organizations in helping maintain the sustainable development of the Lancang-Mekong cooperation mechanism, at the Civil Society Forum in theme of Sustainable Socio-Economic Development in the Lancang-Mekong Region organized by China Association for NGO Cooperation in Kunming, Yunnan province on Nov 23.

They also proposed detailed guidance for NGOs to improve work efficiency and shared tips on how NGOs can enlarge their international influence.

The forum was co-organized by the Yunnan International Non-Governmental Organization Society and Kunming ASEAN International Trade and Investment Promotion Association, sponsored by the Environmental Defense Fund Beijing Representative Office and attracted over 100 experts and representatives from the six countries in the Lancang-Mekong region: Myanmar, Laos, Thailand, Cambodia, Vietnam and China.

In the opening ceremony, Xu Tao, chairman, China Association for NGO Cooperation, shared the achievements of the China Association for NGO Cooperation. He said in the 25 years since establishment, the organization has established cooperation with 183 international NGOs and multi-bilateral mechanisms, more than 100 of which have provided 974 million yuan ($140 milliion) to China. Over 8 million people have directly benefited from the related aid.

By mentioning the problems of poverty and climate change, Saroeun, said the region is a community with a shared future, and added that NGOs should discuss together on how the region should be governed.

"We drink the same water, and we also face up to the same challenges,” said Soeung Saroeun, executive director, Cooperation Committee for Cambodia. He encouraged NGOs to share experience with each other. For example, "NGOs in the other five countries can learn the experience of reform and anti-corruption from China."

In his speech, Chen Jian, former vice-minister at the Ministry of Commerce stressed the essential role of the NGOs in the regional cooperation.

"I think the role that the NGOs have played in the Lancang-Mekong cooperation is irreplaceable."

When answering the question of how the NGOs can work more efficiently, he suggested that NGOs in the region should establish corresponding mechanisms to clarify priorities, grasp development trends and set up principles for cooperation. Especially, he emphasized that the principles must be specific rather than general.

Under the topic of the relationship between Lancang-Mekong cooperation and mass communication, Ma Shengrong, former executive vice president and executive deputy editor, Xinhua News Agency said that in term of being more influential in the region, the NGOs should take three aspects about mass communication into consideration; the theme and methods of communication, the communication effects and the analysis of the target audience.

Ma said "the communication should not be simplified but diversified. We should change the one-way promotion to dialogue, and express ourselves dynamically instead of forming stereotypes.”

On the parallel forum about poverty alleviation and social development, held the next morning, when sharing the projects done in the different local communities, Phonsaona Phutthaluck, Project Manager, World Vision Laos introduced the transformational development model, which is a cycle of building relationship, mobilizing local people, strengthening ties and forming the network.

He said besides taking the cycle as the guidance, the NGOs can let the communities take the initiative in deciding the project contents. "We offered a small amount of money to the community and invite them to decide what they want to do with the money.”

Ma Dingping, secretary general, Chongqing Renewable Energy Society, discussed photovoltaic poverty alleviation projects in Chongqing on a panel of green development and climate change. He suggested that NGOs can increase the project relevance with the national strategies and green industries, such as the green development of the Belt and Road Initiative and the renewable energy industry.

At the closing ceremony, Zhao Daxing, vice-chairman and executive director, China Association for NGO Cooperation, said the conference is a part of the cooperation platform, the ending of which is also the beginning of more and deeper interaction among the NGOs under the Lancang-Mekong cooperation framework in the near future.