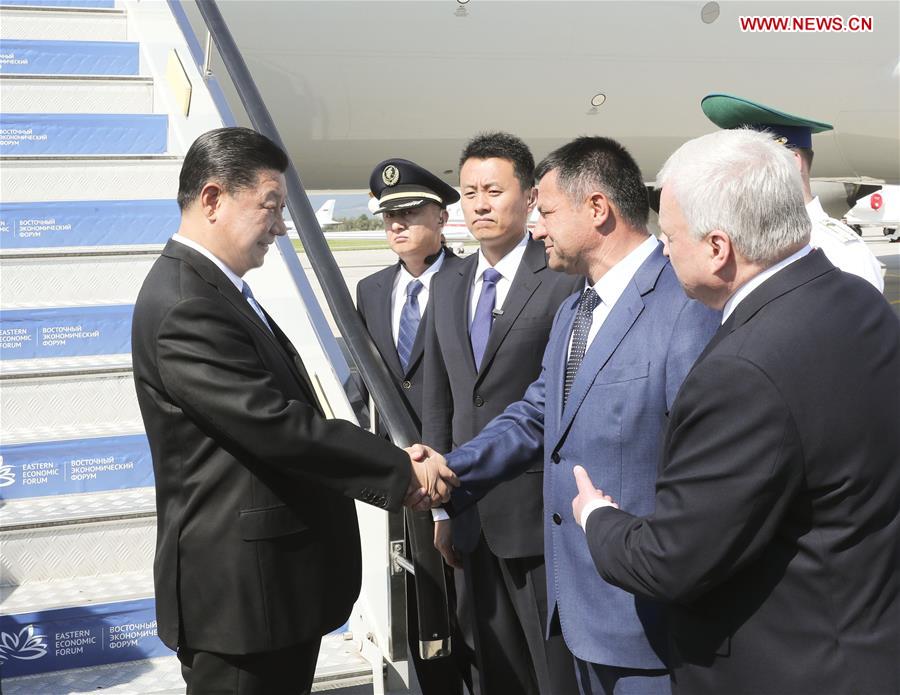 Chinese President Xi Jinping is warmly welcomed by senior Russian officials after he disembarked from the plane upon his arrival in Vladivostok, Russia, Sept. 11, 2018. Xi arrived here Tuesday for the fourth Eastern Economic Forum (EEF) at the invitation of Russian President Vladimir Putin. (Photo: Xinhua)

In recent years, economic and trade relations between the two countries have entered the fast lane.

The following are some key facts and figures about China-Russia economic and trade cooperation:

-- In 2017, China-Russia trade rose 20.8 percent to 84.07 billion US dollars, and China remained the largest trade partner of Russia for the eighth consecutive year, according to China's General Administration of Customs (GAC).

-- In May, China and the Eurasian Economic Union, comprised of Russia, Kazakhstan, Belarus, Armenia, and Kyrgyzstan, signed an agreement to simplify procedures of customs clearance and cut costs of trade in goods.

-- Chinese contractors signed new projects worth 7.75 billion dollars in Russia last year, up 191.4 percent, faster growth than that for most countries participating in the Belt and Road Initiative.

-- China is the largest trade partner and source of foreign investment for the Russian Far East.

-- A second line for the China-Russia oil pipeline began commercial operation in January, raising China's annual imports of Russian crude oil through the pipeline from 15 million to 30 million tonnes.

-- The China-Russia east-route natural gas pipeline is expected to send up to 38 billion cubic meters of gas to China each year upon completion planned for 2020.

-- The Yamal liquefied natural gas (LNG) project in Russia's Yamal Peninsula in the Arctic, saw its first production line open in December 2017. As agreed, at least 4 million tonnes of LNG will be shipped to China every year after the completion of more production lines. Both China National Petroleum Corporation and China's Silk Road Fund own stakes in the project.

-- China and Russia set up a joint venture in 2017 to build wide-body long-haul passenger jets.

-- Field investigation and design of the Moscow-Kazan high-speed railway, a Chinese-Russian project, are being completed.

-- Companies of the two countries are also cooperating in such areas as nuclear power, aerospace, digital economy, and cross-border e-commerce.