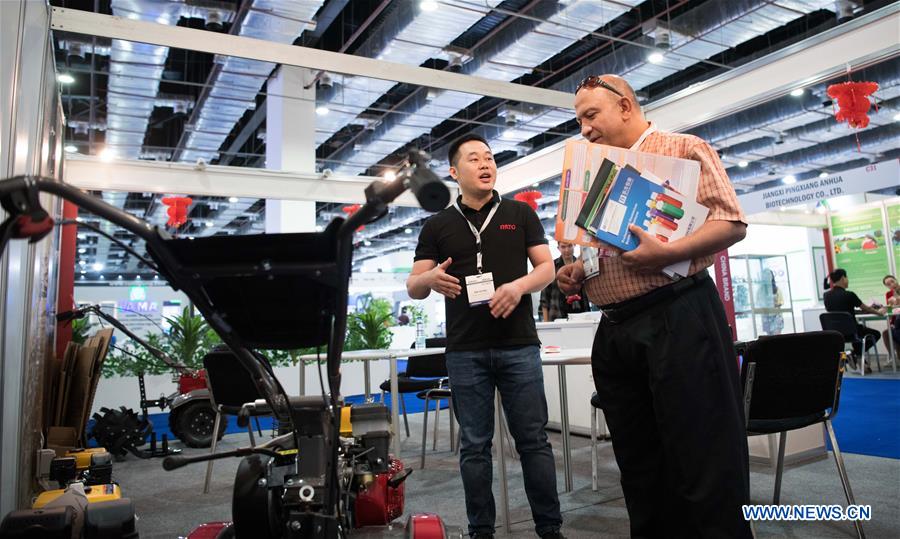 A visitor talks with an exhibitor at the International Agricultural Exhibition for Africa and the Middle East (Sahara 2019) in Cairo, Egypt, on Sept. 9, 2019. (Photo:Xinhua/Wu Huiwo)

CAIRO, Sept. 9 (Xinhua) -- Ahmad Marie, owner of Green Way Co. for Exporting Dates, said that he waits for Egypt's annual agriculture expo to meet his Chinese partners and to be aware of the new Chinese products and researches in the field.

China's demand for dates is increasing and the Chinese companies import high-quality and expensive products, Marie, who displays several types of fresh, dried and half-dried dates in a pavilion in an Egyptian agricultural expo, told Xinhua.

Lunched in 1987, Sahara is the largest agriculture event in Egypt.

With the participation of 138 Egyptian companies and 233 foreign companies including 73 Chinese corporations, the expo displays post-harvest, agriculture-industry, sustainable agriculture, and agricultural machineries' products, in addition to aquaculture and cattle production.

Marie stressed that Egypt will be an international hub for dates after the country adopted new policies to increase the acres of plantation.

The number of the Chinese companies taking part in Sahara is significantly increasing, Marie said, adding that the expo is "a channel for promoting direct communication with the Chinese partners."

In the four-day expo, Marie, who will take part in the coming Shanghai import expo, said that he will communicate with Chinese companies that sell the biological pesticides, seaweed bio-stimulants and organic fertilizers.

Ahmed Barakat, chairman of Arabian Co. for Modern Agriculture service, whose company is working in the field of seedlings, especially of mango and grapes, said that Sahara expo is "more than a mere opportunity to display his products."

His main partners are the Gulf countries and some European countries, Barakat said, adding that he seeks to open new markets in Asia especially in China, the main trade hub in the world.

"I will also study the products of the Chinese companies in Sahara expo, in particular the water-soluble fertilizers which are widely used in drip-spray irrigation system," Barakat added.

In the recent years, the Chinese-Egyptian ties have been elevated to the level of comprehensive strategic partnership.

"Egypt is an important country under the Belt and Road Initiative," said Jiang Hui, chairman of the China Chamber of Commerce of Metals, Minerals and Chemicals Importers and Exporters (CCCMC).

Through the exhibition, more companies will learn about China's fertilizer and pesticide products that have always been praised for their good quality and reasonable prices, Jiang said.

"Chinese companies export a lot in the world, but at the same time, Egypt is also a big exporter of fertilizers, so the cooperation with Egypt will achieve a win-win result," he added.