"I'm amazed by these wonderful Chinese performers ... the artists are very professional and the music is awe-inspiring," Wael Gamal, a sales manager at a computer company, told Xinhua. 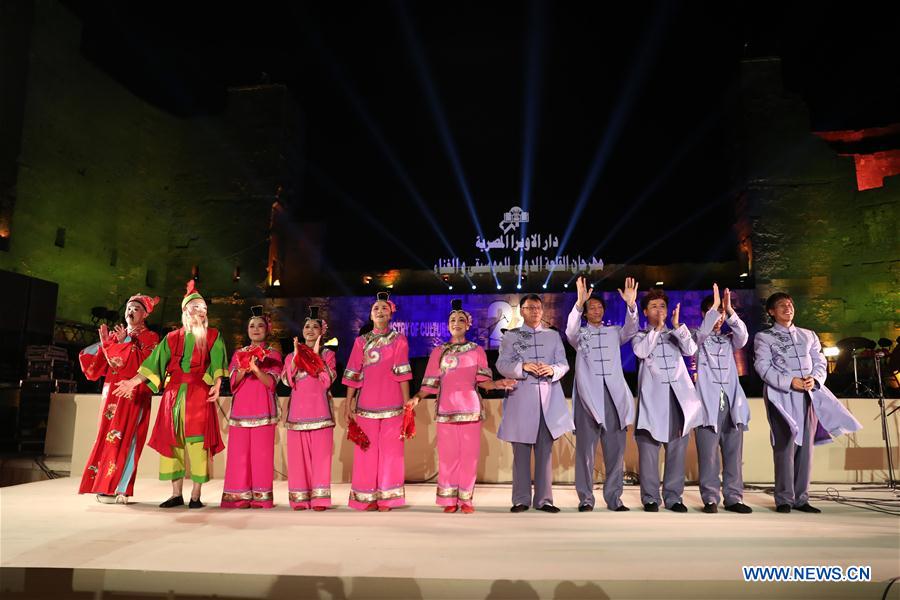 Artists wave during a curtain call after their performance during the Citadel Music Festival in Cairo, Egypt on Aug. 24, 2019. At Cairo's renowned Citadel of Salah ad-Din, Chinese artistic performance of the Gaojia Opera received warm applause from Egyptian audience during the 28th edition of Cairo Opera House's Citadel Music Festival which kicked off on Aug. 18. (Photo: Xinhua)

The 39-year-old man said he liked the way the artists played the musical pieces in harmony, adding that the performance attracted the Egyptian audience notably.

"I don't have to speak about how the audience reacted to the performances ... the applause for the artists proved how much everyone liked the shows," Gamal said.

As the Chinese artists showed their skills, Egyptian audiences were highly charmed by the astonishing performance.

"This is one of the greatest shows I have attended," said Mohammed Rezq, an employee at a local tourism agency, adding that "I was really moved by the performance and I will always remember this show."

The young man said it is the first time to watch a live Chinese show, noting this concert will encourage him to start to listen to Chinese music.

Gaojia Opera, a local traditional drama in Quanzhou city, Fujian Province, is one of the national intangible cultural heritage. It originated from a masquerade parade popular in the rural areas of southern Fujian in the late Ming and early Qing Dynasties to dress up Liangshan heroes and perform martial arts techniques.

On May 20, 2006, Gaojia Opera was approved by the State Council of the People's Republic of China to be listed in the first batch of national intangible cultural heritage, numbered IV-48.

"We have chosen some parts of the most famous clown play to be performed today," Wu told Xinhua.

He said that art transcends national borders, adding that the Egyptian audiences "really understand our performance and give us wild applause."

He said that the troupe travelled to a dozen countries to perform, including the United Kingdom, France, Germany, and others.

After upgrading the relations between China and Egypt to a comprehensive strategic partnership in 2014, cultural exchange has been boosted as artists, cultural and musical delegations have paid frequent visits.