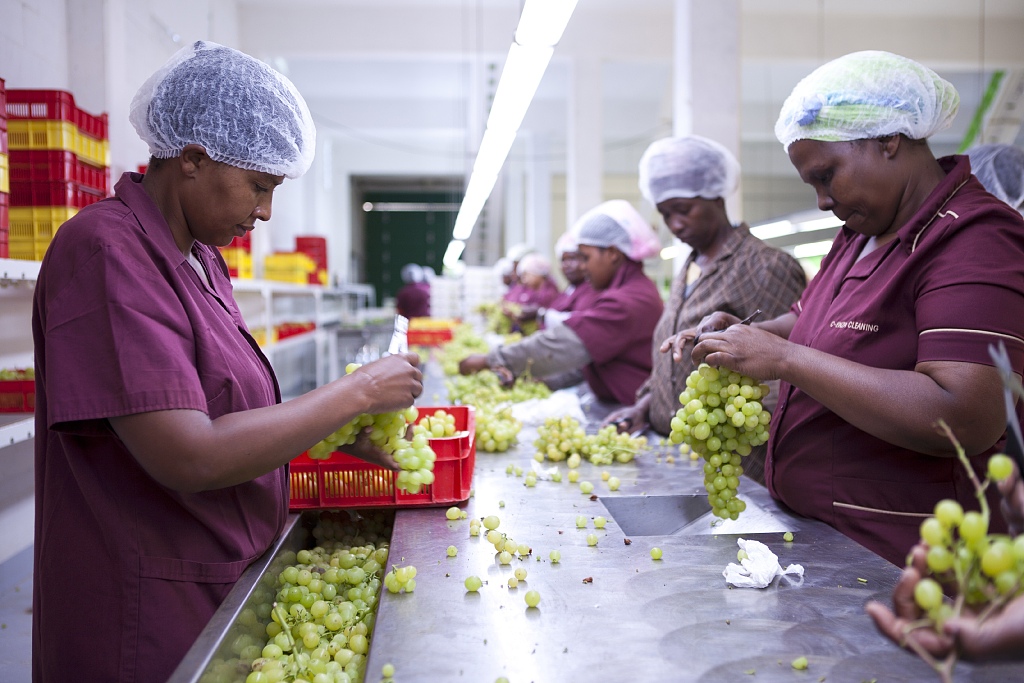 WINDHOEK, Aug. 25 (Xinhua) -- It is a windy Wednesday afternoon at Havana Informal Settlement on the outskirts of Namibia's capital, Windhoek.

At a stall made up of a wooden bench and shade from black plastic bags, informal trader, Tobias Moses hands over a two liter re-usable plastic bottle filled with water to a client to wash fruits. After that, he takes a health break to relieve himself. As he returns, Moses washed his hands and safely packed way a bar of soap into his pocket.

In an area thwarted by Hepatitis E outbreak, an informal network of traders are repelling the spread of hepatitis E through constant handwashing and clientele acumen, to restore the ailing business prosperity.

The Ministry of Health and Social Services in November 2017 announced hepatitis E outbreak. It has hit Windhoek's informal settlements, including Havana.

According to Moses, the outbreak has, since 2018, crippled business, in particular food and perishable commodities ventures in the area.

"As a result, fewer people were buying food and fresh commodities like fruits, meat, and vegetables at the street stalls. Some deemed it as unsafe, hazardous as well as potential to exacerbate the spread of hepatitis E," Moses said on Wednesday.

The traders' sales record books indicate that between January 2018 and March 2019, clientele and proceeds declined drastically. Before that, in a week, Moses could earn 400 Namibian dollars (about 26 U.S. dollars), which declined to 170 Namibian dollars.

According to Kali, customers became more hygiene-savvy, and are unlikely to buy from a dirty place due to fear of Hepatitis E infection.

"About 30 traders in the vicinity verbally agreed to adapt personal hygiene and extend it to business conduct. People started noticing our effort, and business eventually picked up from May this year," said Kali.

Other non-commercial factors also motivated the decision to drive transformation.

Moses explained that the re-launch the hepatitis E outbreak response campaign by the Namibian government in March 2019 also aided in the sensitization.

"We got more information on how to eliminate the spread of the disease, promote hygiene and impact of hepatitis E on social progression and our businesses," he added.

The Namibia Government had also deployed more than 20 community health volunteers in the affected area to educate the public about hygiene and preventative measures.

Foibe Kakwiyu, a community health volunteer in the area, said that efforts are geared towards the adoption of best practices as well as an emphasis on handwashing.

"Some community members are becoming savvier, including some traders. However, more still needs to be done to improve the socio-economic conditions of the majority of the residents," she said.

According to Kakwiyu, water scarcity remains a challenge in the informal settlement, which may impede efforts.

Traders bemoaned that sourcing water becomes a challenge. "The lack of water may strain efforts to promote hygiene and cleanliness in our commercial environment," said Kali.

Despite the spread of hepatitis E, traders said that it would not deter them from adopting more hygienic practices to improve business prospects to yield economic benefits while curbing the spread of the disease.

"We don't want to live in fear for eternity," said Moses.

In the interim, Lilian Kahuika, the state epidemiologist in the Ministry of Health and Social Services, said that collective efforts and community-led total sanitation efforts are critical in curtailing further spread of the outbreak, and setting the path towards to zero infections.

Since the outbreak in 2017, more than 6,000 hepatitis E cases have been reported by the Ministry of Health and Social Services.