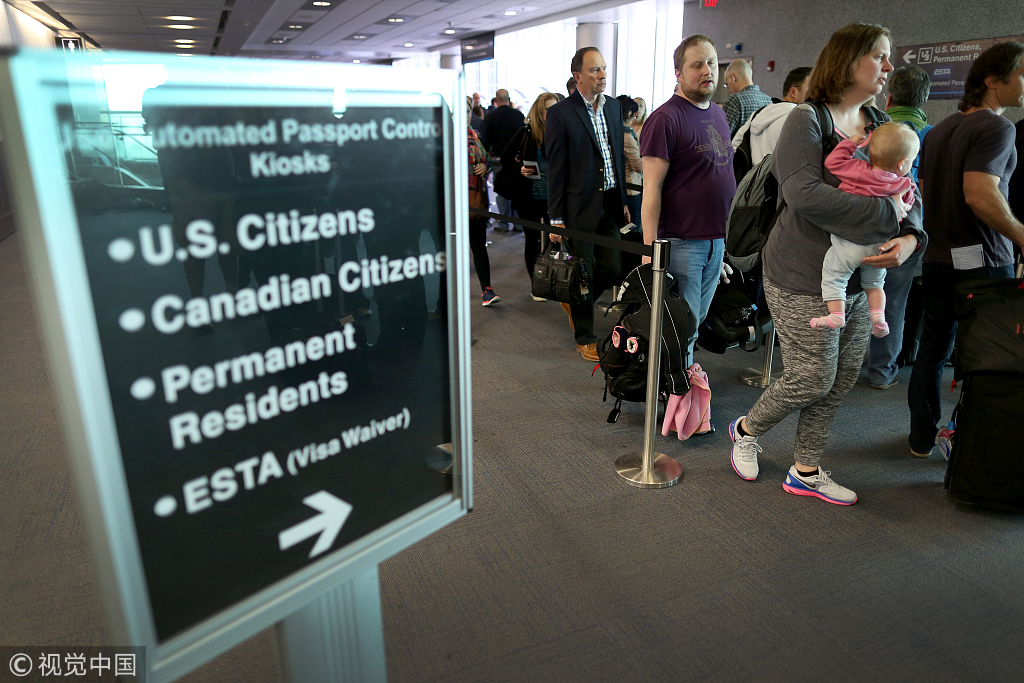 Passengers wait in line to use the Automated Passport Control Kiosks set up for international travelers arriving at Miami International Airport on March 4, 2015 in Miami, Florida. (Photo: VCG)

China has seen slowing growth in the number of people applying for foreign residence or citizenship, a report released on Saturday showed.Developed countries, including the US, Canada, the UK and Germany, have seen fewer Chinese immigrants over the years, while countries involved in the Belt and Road Initiative are becoming more popular as immigration destinations, according to a report issued by Center for China and Globalization (CCG) in Beijing.The five most popular nations  among immigrants along the Belt and Road for Chinese are Singapore (448,000 in total), Bangladesh (177,000), Thailand (100,000), Indonesia (70,000) and Russia (56,000), the report said. In 2017, about 74,000 Chinese were granted permanent residency in the US, 9.2 percent less than that of 2016. Only 2,271 Chinese applied for UK citizenship in 2017, the lowest number since 2007, the report said.Tightening immigration policy in developed nations such as the US and Canada, as well as increasingly conservative attitudes toward immigrants in the UK and Germany, have all been major factors in this changing trend, Weng Li, a law professor at Zhejiang University, told the Global Times on Saturday at the conference on Global Talent Mobility, Migration, and Migration Law held in Beijing. Chinese immigrants are a major source of international capital flows, the report said. In 2017, an estimated $63.9 billion went to China from overseas workers, the second-largest after India. Driven by globalization, China saw 2 million workers in foreign nations, mostly in Asia and Africa in 2016. It is the fourth-largest source of immigrants in the world.Beyond China's economic development, overseas Chinese need to better serve China's rise, said Yan Ting, professor from Research Center for Overseas Chinese at Jiangsu Normal University.China must put forth policies that strengthen the links between Chinese nationals and China, such as preferred visa policies or issue "Chinese origin cards," Yan said.An open political and social environment leads to more international immigrants flowing to China to work or even settle down here, Yan said.