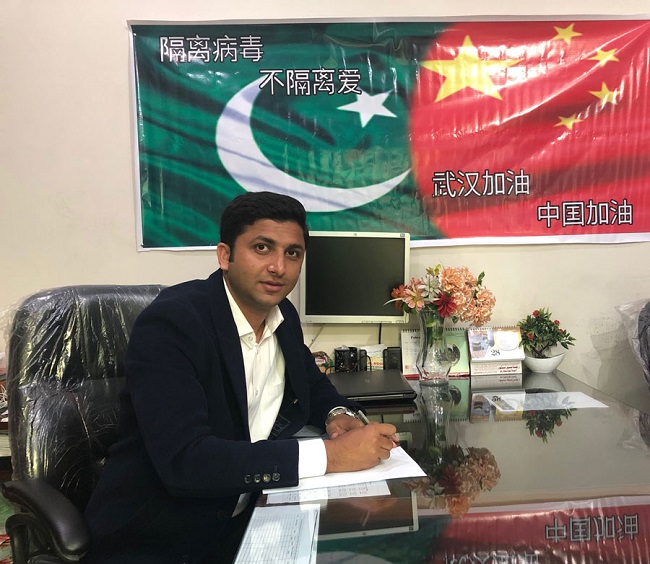 Being the sworn friend of China, we have a famous saying in Pakistan going as "Rather give up gold, don't give up Pak-China friendship”.

On February 10th, The Pakistan Senate voted unanimously to support China's battle against novel coronavirus pneumonia. As President Xi Jinping said in a telephone conversation with Prime Minister H.E Imran Khan on February 20, China and Pakistan are true friends and good brothers who share weal and woe with each other.

The outbreak of the novel coronavirus pneumonia also deeply affected the hearts of every Pakistani student studying in China. On January 23, I saw the news in the WeChat group that the The Third Xiangya Hospital of Central South University is recruiting a team of doctors and nurse volunteers to prepare for the epidemic protection during the Spring Festival, I applied to be the part of front-line battle team immediately. Within five hours, the hospital recruited 26 doctors and 96 nurses. Although I was not selected to serve on the front-line, I still wanted to do what I could to pay back the Chinese government and the institutions which educated us.

Since the outbreak of novel coronavirus pneumonia, I am very glad to see many Pakistani students from Central South University have actively registered to participate in volunteer teams expressing their wish to go to the front line and fight the epidemic and also approached the local and foreign media to let the world know their school life and how China is doing all the possible efforts to fight the epidemic. This gave a very positive message to the outer world and caused the negative impact and rumors to be self-defeated. Ms. Hashemi, Pakistan's ambassador to China, said that Pakistan's overseas students totally feel at ease to stay in China.

The tradition of standing with each other through thick and thin isn’t new. Earlier, during the 2008 Wenchuan earthquake in China, Pakistan did everything in its reach and mobilized all of its domestic transport aircraft to China, and donated 22260 tents to be accurate. China also provided a large amount of aid during the flood disaster in Pakistan in 2010.

During China's novel coronavirus pneumonia battle, Pakistan was not only the first country to announce not to evacuate from Wuhan, but also helped the country to mobilize 300 thousand medical masks, 800 medical protective clothing and 6800 pairs of gloves in the situation when the whole country was under plague by locusts itself. In my city, Faisalabad, all hospitals immediately arranged large scale seminars to learn about novel coronavirus pneumonia. Medical personnel from major hospitals expressed their willingness to stand side by side with Chinese nation if necessary. Teachers and students’ community of whole city also wished good luck to China and Wuhan.

The destiny of all countries in the world is closely linked, and the construction of a community with a joined future for mankind cannot be separated from coordination and cooperation among nations. I strongly believe that with the collective efforts, the epidemic will come to an end soon and spring is about to come full of vigor.