MANILA - Melvin Chua, 23, knows every narrow street of an urban district called Pembo in the Philippines' capital city Manila like the back of his hand. 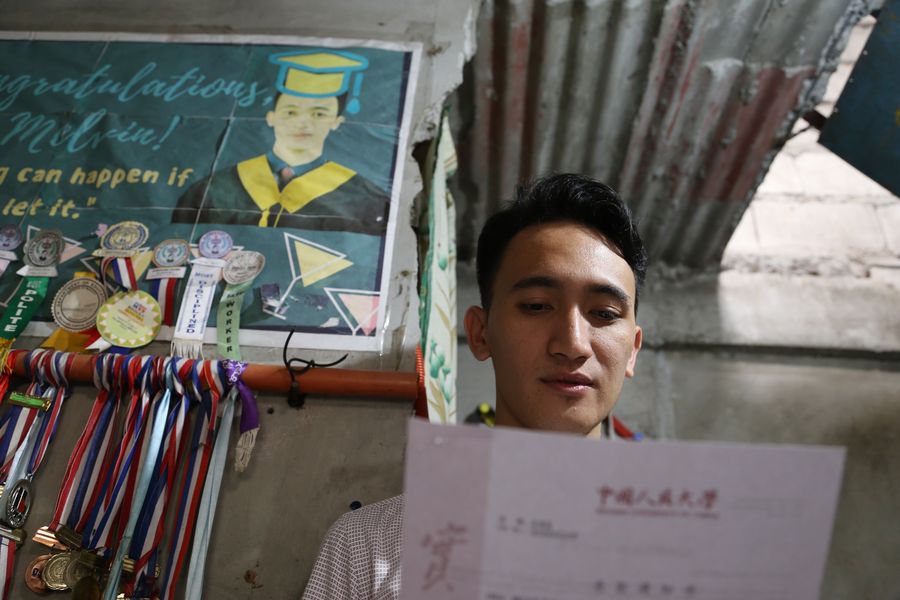 Come rain or shine, he used to walk those streets for more than six hours every day selling dish sponges and dish cleaners to support his family. He has been doing this for 13 years and was given the nickname of "sponge boy."

But soon, the "sponge boy" will walk the streets of China's capital city Beijing, after being awarded scholarship by the Chinese government this year. He and 79 other Philippine students will take up their study in several universities in China.

Melvin got into the Renmin University of China, his first choice, to take up masters in business administration.

"Renmin University has a very good reputation so I really chose the university because I can feel in myself that Renmin can transform me personally and professionally," he told Xinhua.

Aside from a chance to study abroad, Melvin is ecstatic to learn new things and also looks forward to getting to know China's culture and development which have impressed him for years.

"What really fascinates me and what influenced my decision to go there is because of the fast development of China. It will be very beneficial for other countries to take this opportunity to learn from Chinese people, how they transformed their lives", he added.

Before his journey to China, Melvin once again took up a basket and hawked dish sponges on the streets of Pembo on Saturday. His perseverance and cheerful disposition endeared him to plenty of familiar customers.

However, unknown to most of his customers, Melvin has a difficult childhood.

Born into a poverty-stricken family, Melvin is the second of six children. He helped his mother, a single parent, put food on the table at a very young tender age.

He started to sell dish sponges to support his family when he was 8. As a little boy, he would go alone to a large commercial center in Manila, to buy dish sponges in bulk which he would later sell to neighbors in the area, while also finding the time to study for school.

"Usually, I started plying my business around by 3 pm and then went home by 9 pm or 10 pm. Then I need to do my assignments, everything I need to do for school until midnight," he said.

Life as a family breadwinner is not easy. He can earn 300 to 600 pesos (roughly $6 to $12) by selling sponges per day and sometimes had to rummage through trash in search for bottles and cans that he can sell to the junk shop.

The hectic life doesn't make Melvin drop his studies. "I don't have any choice because I can't stop. If I stop, there is a possibility that we wouldn't be able to go to school anymore," he lamented.

In 2018, his 13 years of hard work finally paid off. Melvin graduated with a bachelor degree from the University of Makati, becoming the first in his family to finish college. He got multiple job offers and later took a job at a brokerage company.

Melvin took to social media to express his gratitude for his customers who helped him reach his dreams and treated him like a family. Soon he was thrown into the limelight after his story of survival went viral.

Later the notice of Chinese government scholarships caught his attention. Melvin applied for it and passed.

"This is something new to me, I didn't know this before. Every time that I move forward, like I pass the interview, I submit the requirements, it gives me so much hope. But the process is not easy. They require time and effort. But it's worth it," he said.

Melvin now bids goodbye to the familiar streets in which he once plied his business. Studying in China will be Melvin's first time to be away from his family, but he sees this as a good turning point in life.