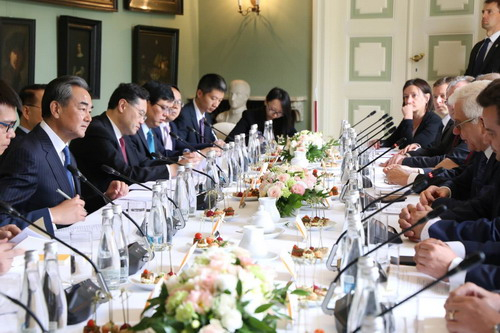 Wang Yi's visit to Poland that started on Sunday is the first stop of his week-long tour of three CEECs. Slovakia and Hungary will be next on the agenda.

China is willing to continue to strengthen communication, coordination and cooperation with the EU so as to jointly accelerate development of China-EU relations in the new era, Wang Yi said.

Wang made the remarks while meeting the press with the Polish Foreign Minister Jacek Czaputowicz following their talks.

Wang said the change of leadership in EU institutions is a significant event in European politics this year, and China is pleased to see the successful transition.

The world today is undergoing unprecedented transformations. China and Europe, as two important global forces, have a critical consensus and broad common interests in safeguarding multilateralism and free trade as well as building an open world economy. The two sides, he said, should thus work together to tackle global challenges, which is of great significance in boosting world multi-polarization, improving global governance and promoting world peace, stability and development.

Noting that China regards the EU as a comprehensive strategic partner, not a rival, the Chinese foreign minister said that China will continue to firmly support the European integration process, the EU's unity and growth, as well as its aspiration to play a more prominent role in international affairs.

He added that China hopes and believes EU institutions under the new leaders will also maintain consistent and forward-looking policies towards China.

During talks with Czaputowicz, Wang said that bilateral relations had withstood the tests of changing international situations and maintained good momentum, noting this year marks the 70th anniversary of the establishment of diplomatic relations between China and Poland.

China has attached great importance to the key role Poland plays as a major country among the CEEC as well as in the EU, Wang said, adding China stands ready to work with the Polish side to extend the traditional friendship, build a cooperation consensus, inject new impetus into bilateral relations, and push for the comprehensive strategic partnership between the two nations to run at the forefront of China-CEEC ties.

On his part, Czaputowicz said Poland, located in the heartland of Europe, is willing to actively take part in the joint construction of the Belt and Road Initiative (BRI), strengthen bilateral exchanges, and play an active role in promoting China-CEEC cooperation and EU-China ties.

Poland welcomes Chinese investments and will treat foreign enterprises according to international laws and business principles. Poland will not exclude Chinese enterprises or adopt any discriminatory measures against them, said Czaputowicz.

The two officials attended the opening ceremony of the second plenary session of the China-Poland Intergovernmental Cooperation Committee on Monday.

During the meeting, Wang said China is looking to reinvigorate its BRI, a move to grow trade with European countries over the ancient Silk Road routes, in an effort to build trust in the region and maintain economic ties. Wang called for Poland and China to strengthen their coordination in a number of issues, including taking greater advantage of the Silk Road transport network. Rail services between Poland and China have grown in recent years, but congestion is an ongoing issue as cargo shipments have increased.

Wang also called for "more fruitful" talks as part of the 17+1 format, which is designed to build cooperation among Eastern European and Western Balkan countries to facilitate Chinese investment in the region.

Czaputowicz said Poland and other European countries should seek to even out trade imbalances with China. "This asymmetry, which Poland sees applies to most European Union member states; we want to look for an agreement to balance this out together," he said.