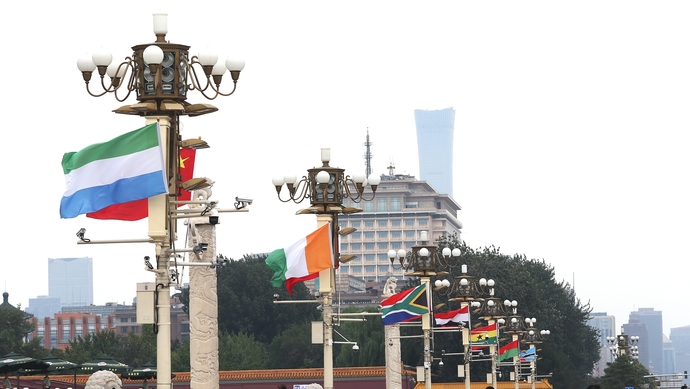 As African leaders are gathering in Beijing for a summit of the Forum on China-Africa Cooperation (FOCAC), expectations run high for the two sides to strengthen their already solid friendship and further enhance pragmatic cooperation to bring tangible benefits to the Chinese and African people.

The summit, scheduled for Sept. 3-4, aims to build a closer China-Africa community with a shared future, further dovetail China's Belt and Road Initiative with African development, set a new path for a higher level of China-Africa cooperation, and deepen people-to-people exchanges.

"We believe that with the joint efforts of China and Africa, the Beijing summit will be a great success and establish a new historical monument of friendly cooperation between China and Africa," Chinese State Councilor and Foreign Minister Wang Yi told a press conference in the lead-up to the summit.

TRADE, INVESTMENT AND BEYOND

Established 18 years ago, FOCAC has achieved fruitful results and has become a significant mark of China-Africa cooperation. China-Africa trade volume amounted to 170 billion U.S. dollars in 2017, up from just over 10 billion dollars in 2000, according to data from China's Ministry of Commerce.

"We could see a two-digit growth rate in the next five to 10 years," said Wei Jianguo, former vice commerce minister, at a recent China-Africa seminar in Renmin University of China. "Is it possible to reach 300 billion dollars in 2020? Some people say it's unlikely, but I believe it's totally possible."

Wei's confidence comes from his expectation of strengthened pragmatic cooperation between the two sides. In the near future, China-funded industrial parks will cover the entire industrial system, Chinese tech companies will set up numerous development bases in Africa, dozens of jointly-built agricultural demonstration centers will bring huge, historical changes to Africa's agricultural industry, and more private companies will invest in Africa, especially in the cultural field, among others, he said.

The commencement of mining, he said, was significant to the people in the town as the new project implies more business opportunities for residents.

A more well-known name would be Huajian, a Chinese shoemaker that produces for brands like GUESS and Calvin Klein. The Chinese company has already provided direct jobs to more than 8,000 Ethiopians with its two local factories.

More concrete projects are expected to come into being during the upcoming series of FOCAC events, including the High-Level Dialogue of China-Africa Leaders and Business Representatives and the 6th China-Africa Business Forum.

"The expected outcome of the summit will translate the strong willingness of both sides to deepen pragmatic cooperation into concrete action, and make comprehensive plans for the priority areas and key directions of China-Africa cooperation in the next three years and beyond, particularly those areas related to African people's livelihoods and employment and meeting the needs of African economic transformation and upgrading," Wang said.

It will speed up the industrialization and modernization of the continent, and push China-Africa cooperation to a higher level, said the Chinese diplomat.

This year marks the fifth anniversary of the China-proposed Belt and Road Initiative, with more African countries expressing their interest in joining the grand project.

So far, nearly 10 African countries have signed Belt and Road cooperation agreements with China, and a few more are in negotiations. Recently in July, during Chinese President Xi Jinping's visit to Africa, China signed cooperation documents with Senegal and Rwanda.

Proposed in 2013, the Belt and Road Initiative refers to the Silk Road Economic Belt and the 21st Century Maritime Silk Road, which aims to build a trade and infrastructure network connecting Asia with Europe and Africa along the ancient trade routes of the Silk Road.

Costantinos Bt. Costantinos, who served as an economic advisor to the African Union and the United Nations Economic Commission for Africa, told Xinhua that "more than any other nation in Africa, Ethiopia is the first beneficiary of the initiative through the Addis Ababa-Djibouti rail link."

The initiative has emphasized infrastructure projects such as railways, highways and airways, and brought various opportunities for the development of infrastructure in Africa over the past few years, he said.

Costantinos, also professor of public policy at the Addis Ababa University in Ethiopia, further lauded the initiative for its target to economically integrate countries through various projects.

Cooperation under the initiative, which certainly goes beyond infrastructure, is expected to be a major topic of the upcoming FOCAC summit.

China is willing to work with Africa to dovetail its Belt and Road Initiative with the Agenda 2063 of the African Union, the 2030 Agenda for Sustainable Development of the United Nations, as well as the development strategies of individual African countries to explore new opportunities and inject new impetus for Africa's development, Wang said.

Liberian President George Weah has said that his country is ready to align its "pro-poor agenda" with the China-proposed initiative. Speaking to Xinhua in his office in the capital Monrovia, the president said Liberia will seek opportunities at the summit in Beijing.

In order to further strengthen the initiative's potential for African development, Costantinos suggests the upcoming FOCAC summit include industrial and agricultural technology and knowledge transfer initiatives as well as discussion on how African countries can better utilize natural resources for the continent's development.

In the latest manifestation of growing communication between the Chinese and African people, a group of 169 Kenyan students, who have received Chinese scholarships, are set to depart for different cities and universities across the Asian nation to further their studies.

Sun said since the Johannesburg FOCAC Summit in 2015, China has provided over 67,000 training opportunities for Kenyan personnel from different sectors.

Liu said China-Africa people-to-people exchanges should pay special attention to the needs of young Africans since they account for a large percentage of the population and face challenges such as unemployment.

"Long-term, sustainable China-Africa development depends on the young people of both sides," Liu said. "We should provide a good environment for young Africans to start up businesses, get jobs and learn skills."

Liu suggests the two sides roll out a series of long-term measures to boost cooperation in education, healthcare, sports, music, tourism, and the protection of intangible cultural heritage.

The number of Chinese tourists to Africa is rapidly growing as African countries are trying to attract more visitors from China. Morocco and Tunisia have already eased visa restrictions.

In 2017 when Tunisia began to offer visa-free entry to Chinese tourists, their number skyrocketed to around 20,000 that year, 12,000 more than that in 2016, Dhia Khaled, Tunisian ambassador to China, told Xinhua recently. He noted that Tunisia expects to receive 30,000 to 35,000 Chinese tourists this year.

"I call on African countries to make full use of the summit to strive for the well-being of the people of both China and Africa," Khaled said.