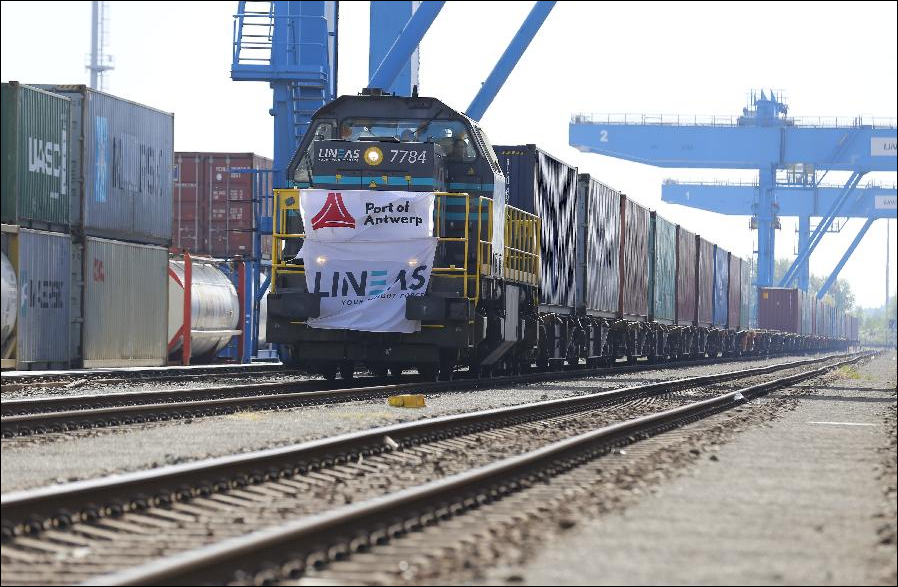 The China-Europe freight train from Tangshan City in north China arrives in Antwerp of Belgium May 12, 2018. (Photo: Xinhua)

Coinciding with the 5th anniversary of the China-proposed Belt and Road (B&R) Initiative, the European Union (EU) recently adopted a document outlining the bloc's vision for a new and comprehensive strategy to better connect Europe and Asia.

Dubbed as the EU version of Belt and Road, the new strategy prompts both cheers and jitters across the continent. Some believe that it is a perfect match for the China-proposed trans-continental initiative, while others say the two grand plans are natural rivals.

Following the Joint Communication by the European Commission (EC) and the High Representative of the Union for Foreign Affairs and Security Policy that sets out the EU vision, the EU's executive arm issued a statement on Sept. 19 saying that "with sustainable, comprehensive and rules-based connectivity at its core, the Communication will help to guide the EU's external action in this field and is a part of the implementation of its Global Strategy."

Why has the EU released the Joint Communication at this moment?

It is "increasingly urgent for the EU to formulate its policy on Euro-Asian connectivity" as a connected Asia offers increasing opportunities for investment and in some other fields.

Some media organizations, like the Financial Times, said the strategy is "an answer" or "a counter" to the B&R Initiative.

But for Alicia Garcia-Herrero, senior fellow of the Brussels-based think tank Bruegel, the strategy "is long in the making. It is not a new plan."

Commenting on those reports, Garcia-Herrero, who is also the chief economist for Asia Pacific at Paris-based investment bank Natixis, told Xinhua that "the EU has had such connectivity plans for many years."

In another statement released on the same day after the Joint Communication, the EU clearly said that "the European Union and China share an interest in making sure that our respective initiatives work well together, despite the differences in approach and implementation."

"Connectivity is not possible if systems and networks are not interoperable. As we have already been doing, the European Union will continue to engage with China -- in our bilateral Connectivity Platform, in the wider bilateral relationship, and in multilateral fora -- to create synergies and to find commonalities," said the statement.

China put forward the B&R Initiative in 2013 with the aim to promote trade and infrastructure connectivity along the ancient Silk Road routes linking Asia with Europe. China has said its potential cooperation partners are welcome to dovetail their own development initiatives with the grand development plan.

Massimo Bagnasco, vice president of the European Union Chamber of Commerce in China, expects that there will be more cooperation than competition between the EU's new connectivity plan with the B&R Initiative.

"In principle competition is always useful because with competition you can have a better service or a better product to the final user. In this case I believe that competition is important in joint cooperation."

"I am not saying that for each project we could have a joint cooperation but at least we should have the attitude in the approach to let these two initiatives have some common ground for cooperation," he noted.

"Basically the point from the European Commission (for the strategy) is to have a tool that could be used for cooperation with China in the topic of connectivity," said Bagnasco.

Bagnasco, who has been doing business in China for over 15 years, told Xinhua that the European side is both confused yet has high expectations regarding the B&R Initiative and that calls for "more dialogue, communication and engagement to find a common ground for cooperation between the Belt and Road and the (EU's) connectivity platform."

Shortly after the unveiling of the EU strategy, China welcomed it with open arms.

"We expect that the European Union will play a constructive role in improving connectivity between Europe and Asia, send a positive signal to the world to promote economic cooperation among all countries on the two continents and build an open world economy," said Chinese Foreign Ministry spokesperson Geng Shuang.

"China always supports the push for enhancing connectivity between the Asian and European continents, which is also a major goal of the Belt and Road Initiative," Geng said.

"We believe that with the joint efforts of China and Europe, connectivity between Asia and Europe is sure to continue forging ahead, bringing more benefits to people in all countries across the region," said the spokesperson.

To create synergy between the two connectivity plans, Garcia-Herrero believes that the EU and China would need to share.

"They should not compete for projects but actually agree on jointly financing a project. That makes sense for both," she added.

Echoing Garcia-Herrero, Bagnasco noted that China could be a potential partner to facilitate the financing for the EU's newly released strategy.

Though the private sector in Europe "is always very active and ready to take action as soon as they see opportunities which are reasonable, with a solid business plan and transparent conditions, there may be more difficulty from the public sector," said Bagnasco.

"I mean actually we will have some technicalities that may slightly slow down the speed of the (implementing) process," said the business leader, who eyes more cooperation on finance between China and the EU.

By putting together the strengths of Europe and China, better results could be achieved, he told Xinhua.

"I don't think that the two are antagonistic, or zero-sum," said Ruan Zongze, executive vice president and senior fellow at China Institute of International Studies.

"This is not a black and white issue. The two can work with each other and get their own," Ruan said. "Healthy competition is not bad for us."