On 6th July, the activity Prelude of the National Games · Themed Trip to Xi'an for Foreign Ambassadors' Spouses made a stop in Xi'an Chanba Ecological Area (CBE). During the activity, spouses of foreign ambassadors visited several sites in the area, including the Start Square of the Sanheyishan (Three Rivers and One Mountain) Greenway Project, Xi'an Expo Park, and the Manshui Bridge in Guangyuntan Park, fully experiencing the Chanba Ecological Area that is green, ecological-conscious, international-oriented, fashionable and that integrates culture and tourism. 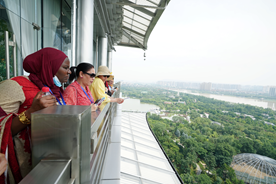 Prelude of the National Games · Themed Trip to Xi'an for Foreign Ambassadors' Spouses is co-hosted by Foreign Affairs Office of Xi'an Municipal People's Government, Information Office of Xi'an Municipal People's Government, and CRI Online of China Media Group. The activity aims to tell wonderful stories of Xi'an well and show the good image of Xi'an by inviting spouses of foreign ambassadors to visit Xi'an, experience the atmosphere of the 14th National Games and feel the happiness prevailing in the city. 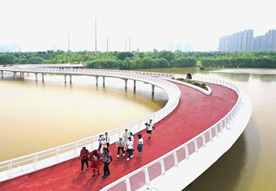 Chanhe River and Bahe River, two main rivers of the Sanheyishan Greenway Project, were equipped with a total of 47.7 kilometers of major greenways on both banks within the Chanba Ecological Area. Among them, the greenway along the Bahe River is located in the core area of the 74-kilometer barrier-free passage, a major section of the Sanheyishan Greenway Project. Through the construction of greenways, parks of the ecological area, scenic spots, landmark buildings, cultural relics, are smartly linked together, forming an ecosystem network that largely integrates the scenic spots, passages and areas. 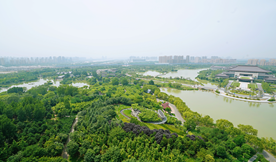 Toomata Silverina, spouse of Samoa's ambassador to China, came to the Sanheyishan Greenway Plaza to experience the scenery of Chanba Ecological Area. She said, "The 'Three Rivers and One Mountain' Greenway Project is substantial. I was quite impressed by the infrastructure here, which has achieved great development while taking the ecological environment into account. This is truly a benefit for future generations." 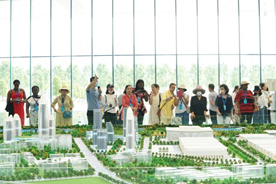 Along with the operation of Xi'an International Convention and Exhibition Center, CBE will, through the "golden name card" of international exhibitions, invite more investments, promote project implementation, and optimize business environment so as to build a fully functioning ecological chain for Chanba's modern service industry and help Xi'an become an exhibition city. 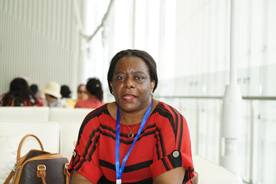 Today, CBE has becomes a new fashionable choice for having trips in the east of Xi'an, and it is also a place for web celebrities to check in. During the trip in Chanba, the Foreign Ambassadors' Spouses can't help but taking many photos. "Chanba is so beautiful. It's like walking in a landscape of painting. " said Moin Farrah, Mrs. of Pakistan's ambassador to China.