Journalists from countries along the route of the Belt and Road Initiative have lauded China's efforts in the fight against terrorism and the country's call for joint forces from the global community to deal with it. 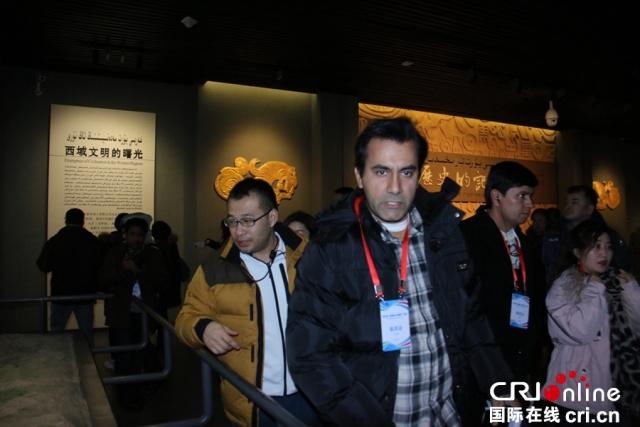 Journalists visit the Xinjiang Museum on January 9, 2019, as part of the seventh "Silk Road Celebrity Tour". (Photo: China Plus)

This is part of the seventh "Silk Road Celebrity Tour", sponsored by China Media Group, that kicked off in Xinjiang, where the government has implemented anti-terrorism measures to fight extremism.

Journalists from mainstream media in Turkey, Egypt, Afghanistan, Pakistan, Bangladesh and Sri Lanka, who are part of this year's tour visited an exhibition which showcases major terrorism cases in the region.

Since the 1990s, the "three evil forces" of terrorism, extremism and separatism in China and abroad have plotted, organized and conducted thousands of violent terrorist attacks in Xinjiang, killing a large number of people and hundreds of police officers, as well as immeasurable property damage.

Misket Dikmen, chairman of the Journalist Association in Izmir, says as Turkey is also being plagued by terrorism, his country is among those that understand what China is experiencing.

"The exhibition we see today shows the bloodshed and death resulting from terrorism. I really think it is a brave move to showcase the suffering inflicted by terrorism to the world with no reserve. People can understand it better with their own eyes."

Facing complex and grave circumstances, the Chinese government has resolutely taken measures in preventing and combating violent terrorist crimes in accordance with the law.

Turkish journalist Enes Taha Ersen says China's experiences are helpful for his country and the rest of world.

"The Chinese government has rolled out a string of effective measures, largely preventing terrorist attacks from happening. There have been no violent terrorist attacks for 25 consecutive months in Xinjiang. I hope the stability and peace will continue."

Terrorism and extremism are very hard to root out and can easily resurge. Journalists visit the Xinjiang Museum on January 9, 2019, as part of the seventh "Silk Road Celebrity Tour". (Photo: China Plus)

In an interview with the media last October, Shohrat Zakir, chairman of the Government of Xinjiang Uygur Autonomous Region, said authorities have given equal importance to fighting and preventing terrorism, and sought to combine the fight against violent terrorist crimes with the protection of human rights.

"Terrorism is the common enemy of mankind, not just a region or a nation. I see this is happening almost every single day in Afghanistan and I really hope the international community can work closely in the fight against terrorism, and we also hope to get the assistance from China. Because the Chinese government has done a great job on this, I hope they can share experience with Afghanistan."

FM98 Sino-Pakistan Friendship Station host Tassawar Zaman Babar adds that terrorism has nothing to do with religious beliefs and Islam is a religion that advocates peace. Terrorist activities in the name of Islam must be opposed.

Xinjiang has started to enjoy the dividend of effective counterterrorism efforts.

In 2017, Xinjiang had a 7.6 percent growth in GDP while the per capita disposable income of residents increased by 8 percent.

Tourism boomed in the same year when the region registered more than 100 million trips by domestic and international tourists, a year-on-year growth of 32 percent.