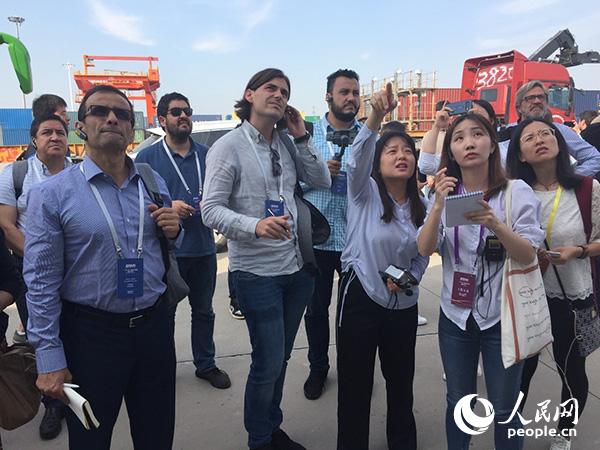 As soon as they entered the hall, the journalists were attracted by the information flashed on a large screen and took photos on their phones. It shows the real-time monitoring data of the freight train Chang'an, including the number of departure lines, import and export goods.

In ancient times, Chang'an city was the starting point of the Silk Road. Today, Xi'an international port area is the largest inland port in China, connecting Europe and Asia. The main route of Chang'an is from Xi'an to Rotterdam, The Netherlands, through Russia and other countries. It is 9,850 kilometers long. This line is called a "golden passage" along the Silk Road economic belt.

Garcia Havel, chief of the Spanish Effie News Agency in Beijing, asked: "I know that there is a freight train route from Yiwu to Madrid. What is the difference between the Chang'an and the Madrid train? What kind of goods do they transport? "

Zhao Yue, deputy general manager of Xi'an International Port Area Land Port Group, briefed the journalists. It used to take about 50 days for goods to be transported from Xi'an to Germany, first to coastal ports and then to Germany by sea. Through the freight train Chang'an, the whole journey only takes about 15 days. The transportation costs only one-sixth of others. In 2018, it made 1,235 trips, and is expected to rise to 1,800 to 2,000 in 2019.

Alexandre Gaza, reporter of Mexican News Agency, said: "The speed of development is amazing, the potential is huge."

Amando Melga, a journalist from Costa Rica's Ethnic News, said: "This approach not only promotes China's economic development, but also brings more employment opportunities and economic sources to countries along the line."