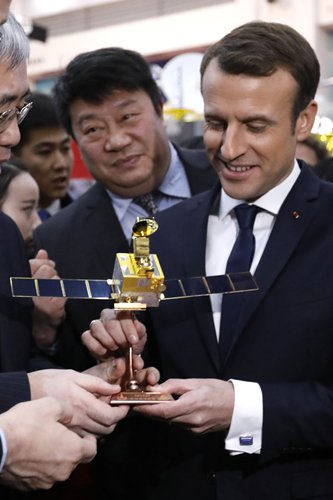 French President Emmanuel Macron receives a scale model of the CFOSAT (China-France Oceanography SATellite) during his visit to the China Academy of Space Technology in Beijing on Wednesday. Photo: AFP

French President Emmanuel Macron said he recognizes China's role in globalization and expects France to build new rules together with China for global trade, as he wrapped up his fruitful three-day visit in China.A more transparent and favorable cooperation mechanism should be established for Europe, France and China, Macron noted. He supports a pragmatic approach to France's strategic partnership with China."We tell the truth without unnecessary provocation," Macron said.Angela Merkel's uncertain future in Germany has created a vacuum in European leadership, and Brexit has marginalized the UK, which prompted Macron to strengthen ties with China, Wang Yiwei, director of Renmin University of China's Institute of International Affairs, told the Global Times."Those factors are likely to help France gain a leading role in Europe-China affairs," Wang said.During his visit to China, Macron witnessed the signing of deals covering aviation, energy, agriculture, culture, education and sports.France is facing a trade deficit with China, and French companies expect more access to the Chinese market, Macron told the Global Times during a press conference on Wednesday at the French embassy in Beijing.He called for a more balanced business relationship between the two nations.Some projects, considered symbols of bilateral cooperation, have advanced, Macron said. For example, the European Pressurized Reactor (EPR) at the Taishan site of China General Nuclear Power Group has just been unveiled as a pilot project. And reopening the Chinese market to French beef products is crucial, Macron added.China is the eighth biggest importer of French products, according to the French government's website.One of Macron's missions in China was to strike a balance in relations with China. The sluggish economic recovery after the European financial crisis has forced the French government to shift its focus toward the East, and China could help create new momentum for the country, Bai Ming, a research fellow at the Chinese Academy of International Trade and Economic Cooperation, told the Global Times on Wednesday."Figures from recent years show the deficit between France and China has narrowed. It is also far less significant than the trade gap between the US and China," Bai said. Narrowing trade gapIn 2016, trade between China and France was worth $47.13 billion, according to the Chinese Ministry of Commerce. China's exports to France slid by 7.8 percent year-on-year to $24.66 billion, with imports from France worth $22.47 billion.To reduce trade deficit, Macron's visit led to the signing of major deals, including an Airbus contract with China for 184 A320 jets, which will be soon be finalized, he told the press conference.Other French companies signed new deals. For instance, French multinational aircraft engineering firm Safran SA signed a $2 billion deal to provide engines to Xiamen Airlines. Airbus announced on Tuesday it would increase its A320 production in China's Tianjin plant. France should look beyond traditional sectors to seek more balanced trade with China, Bai said."Increasing exports of high-tech products is a good solution," he said. Also, as a supporter of China's Belt and Road initiative, France could benefit more from related projects, such as freight trains connecting China and Europe in the future, Bai told the Global Times.China and France jointly pledged to provide a fairer and more transparent business environment for companies on both sides, and lower investment barriers. Still, Macron said some "strategic sectors" were not completely open either way.