BRI NEWS From the Middle to Far East

From the Middle to Far East

Pulling together Arab and Chinese civilizations 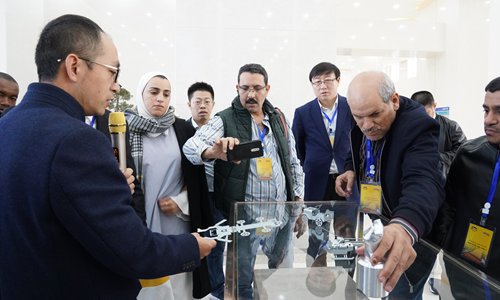 Lanzhou, an inland city in Northwest China, known for its famous beef noodles, welcomed a group of special guests from West Asia and North Africa on Saturday.
Fifteen journalists from eight Arab nations, Egypt, Oman, United Arab Emirates (UAE), Union of Comoros, Lebanon, Mauritania, Sudan and Tunisia, spent three days in Lanzhou flanked by Chinese reporters, to witness the development of this historical city in areas such as ecological management, economic development and cultural construction, including in industry and technology.
The visit was facilitated by the Belt and Road News Network (BRNN) Media Workshop which was launched in April, under the aegis of the People's Daily. As of now, it has 194 media members from 94 countries. Lanzhou is the home to more than 30 minority ethnic groups. Among them, the Hui ethnic group makes up a large proportion besides the Han ethnic group. Many Muslims make a living by running beef noodle restaurants in the city.
For many of these journalists, it was their first visit to China. Although they had a basic idea about Lanzhou before arriving, when they saw the Yellow River, their heart seemingly struck an instant connection with this eastern land.
Walking down the riverside promenade along the Yellow River, Mohamed Hamrouni from Tunisia took photos while listening to the tour guide. He was surprised to learn that the beautiful promenade he was walking along is a defunct pump station.
"I'm really impressed by the beautiful view along the Yellow River," said Mohamed, the director-general of Journal Array Alaam, a weekly newspaper in Tunisia published on Thursday.
In the 1960s, Lanzhou built a pump station to supply water to the Lanzhou Railway Administration. The pump station, including pipelines and galleries, covered an area of 3,330 square meters along the Yellow River. In 2008, Lanzhou Railway Administration started using tap water instead of pumping water from the Yellow River, and the pump station was soon discarded.
In 2018, a reconstruction project was approved for the improvement of the riverbank view as well as for making a livable urban environment for the local people. Between December 20, 2018 and May 30, 2019, a 500-meter tall observation deck and a 280-meter long promenade were built on the original site of the pump station. Without broken plants and senescent pipelines, the green and clean riverbank has become a significant recreational spot for Lanzhou residents. It also attracts tourists from all over the nation.
"China is a great country," with a statue called Mother Yellow River on his backdrop, Mohamed told the Global Times. "Today's Yellow River in Lanzhou reminds me of the Nile. We Arab people have a saying, 'The Nile is a gift for Egypt.' I think the Yellow River is also a gift for Lanzhou." Beyond a bowl of noodles
If a Chinese person is asked about Lanzhou, "ah! Beef noodles" would probably be the most anticipated response.
Restaurants serving Lanzhou beef noodles have penetrated every city in China. It is not only attached to Lanzhou's identity but it has also evolved as an important industry.
According to statistics from the local government, there are more than 1,200 beef noodle restaurants in Lanzhou and more than 40,000 restaurants all over China, generating employment for about 300,000 people with an annual turnover of 60 billion yuan ($8.5 billion).
In addition, more than 160 restaurants have been opened in 40 countries and regions all around the world. The brand of Lanzhou beef noodles has attained definite fame among people all across.
In Lanzhou's famous beef noodles restaurant Jinding, the Arab journalists enjoyed a hand-pulled noodles (also lamian in Chinese) show. With simple pulls and swings, a lamian master made four types of lamian noodles of varied thickness within seconds.
The journalists applauded the show. Some of them even rolled up their sleeves and gave it a try.
Hind Alsareem, a reporter and presenter from Dubai Media Incorporated, was very excited to try his hand in making lamiannoodles.
"The dough is not too soft and not too hard, which is very easy to be shaped. And the way of making noodles by pulling is also very convenient," she said.
"In the UAE, we usually import noodles. I've seen restaurants selling noodles like this in my country but they're not as delicious as what I ate today," said Hind. "I know China is promoting its food culture around the world. It's a meaningful thing. I look forward to seeing more Chinese restaurants being opened and spread Chinese cuisine culture all around the world." Arab journalists on the bank of the Yellow River.

Whispers of true voice
In the beef noodles restaurant, a quick conversation between an Egyptian journalist and the lamian master attracted many eyeballs.
"Do you go to the mosque very often?" asked Mahmoud Mohamed, the managing editor of youm7.com, the website of an Egyptian daily newspaper, after learning the lamian master, surnamed Ma, is a Muslim.
"Yes, I do. I often go there after work," Ma answered.
"But I've read many reports from the Western media, saying that the lives of Chinese Muslims are not free. Muslims are being oppressed by the government," said Mahmoud. "Can you tell me how's your real life in China is?"
Ma replied, "I feel Chinese Muslims are free. All people have the freedom to believe in any religion. The government doesn't restrain you in your beliefs. Muslims go to the mosque and worship freely."
"Then why you don't fight back against their fake reports? Why don't you explain?" Mahmoud rebutted.
"I'm just nobody. This is the work of you people with knowledge," Ma replied with a smile. "What I know is, China is a power of culture and we have faith in our country. As an ordinary person, what I can do is give my best at work and live a better life. I think that's the best explanation." 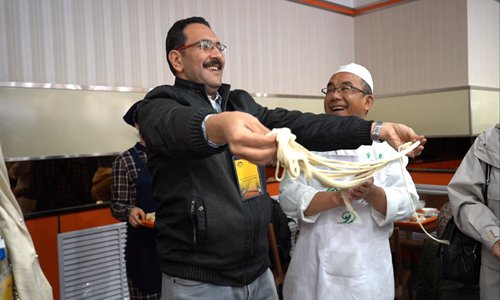 Mahmoud Mohamed (left), the managing editor of youm7.com which is the website of an Egyptian daily newspaper, shows the lamian noodles he made, to his fellow journalists.

Hearing that, Mahmoud held Ma's hand and told other journalists, "This is what I feel during my days in China. I can tell from what I saw that Chinese Muslims are free. They are living a good life."
"There are many false reports about Chinese Muslims from the West. I suggest them to take a look at the real situation by themselves before they write their report. As a journalist, we have the responsibility to tell the world what the real situation is," he added.