BRI NEWS From the mind to the canvas

From the mind to the canvas

Morocco is often in Kata Németh's dreams, and when it is, next day she will take out her paints and a fresh canvas and set to work to capture the nocturnal imaginings. Now, an exhibition of her paintings, "A Dream in Morocco", has gone on display at the Gallery of Young Artists, Hotel Benczúr, in District VI. 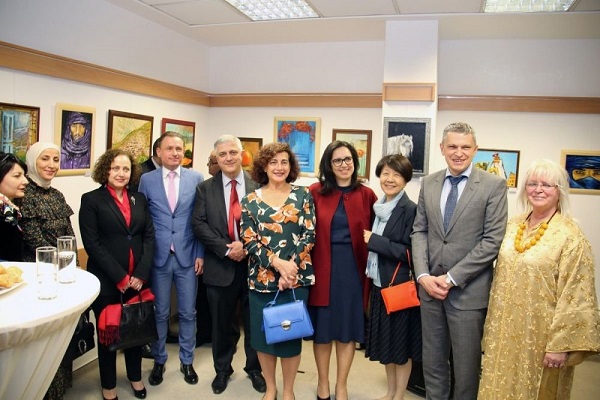 Németh, who owns a book-keeping company in Szekszárd, first went to Morocco in 2012 and has since totalled nine visits. She likes to stay in villages as well as the cities and towns, and she prefers accommodation with families rather than hotels. Morocco is in her heart, she says, and she hopes to take the exhibition elsewhere in Hungary.

Her painting is simply a hobby and her works on show include Berber people, Arabic horses, vats of dye for colouring cloth, a fennec fox with outsized ears, still-life flowers and fruit, a camel, a praying man, the notable Hassan II Mosque at Casablanca, a hill village and windows, doorways, balconies and other features that will be familiar to anyone who has visited the North African country.

Németh told the gathering at the opening of the exhibition on April 16, 2019: "I hope my paintings will touch you as much as Morocco touched me during my several visits." Ambassador Karima Kabbaj of Morocco said the paintings show the interaction between the two cultures, making this artwork so unique. The ambassador added: "She couldn't portray my country better. She has overcome the language barrier with her fingers and shown many aspects of Morocco."

Ambassador Kabbaj said it is the 60th anniversary of diplomatic relations between Morocco and Hungary, and happily this exhibition reflects the friendship between the two countries. She announced the setting up of the first Moroccan-Hungarian Association to promote not only political links but also to bring people together. The association would be a powerful tool for new opportunities for strengthening knowledge, and would be an engine for linking the two.