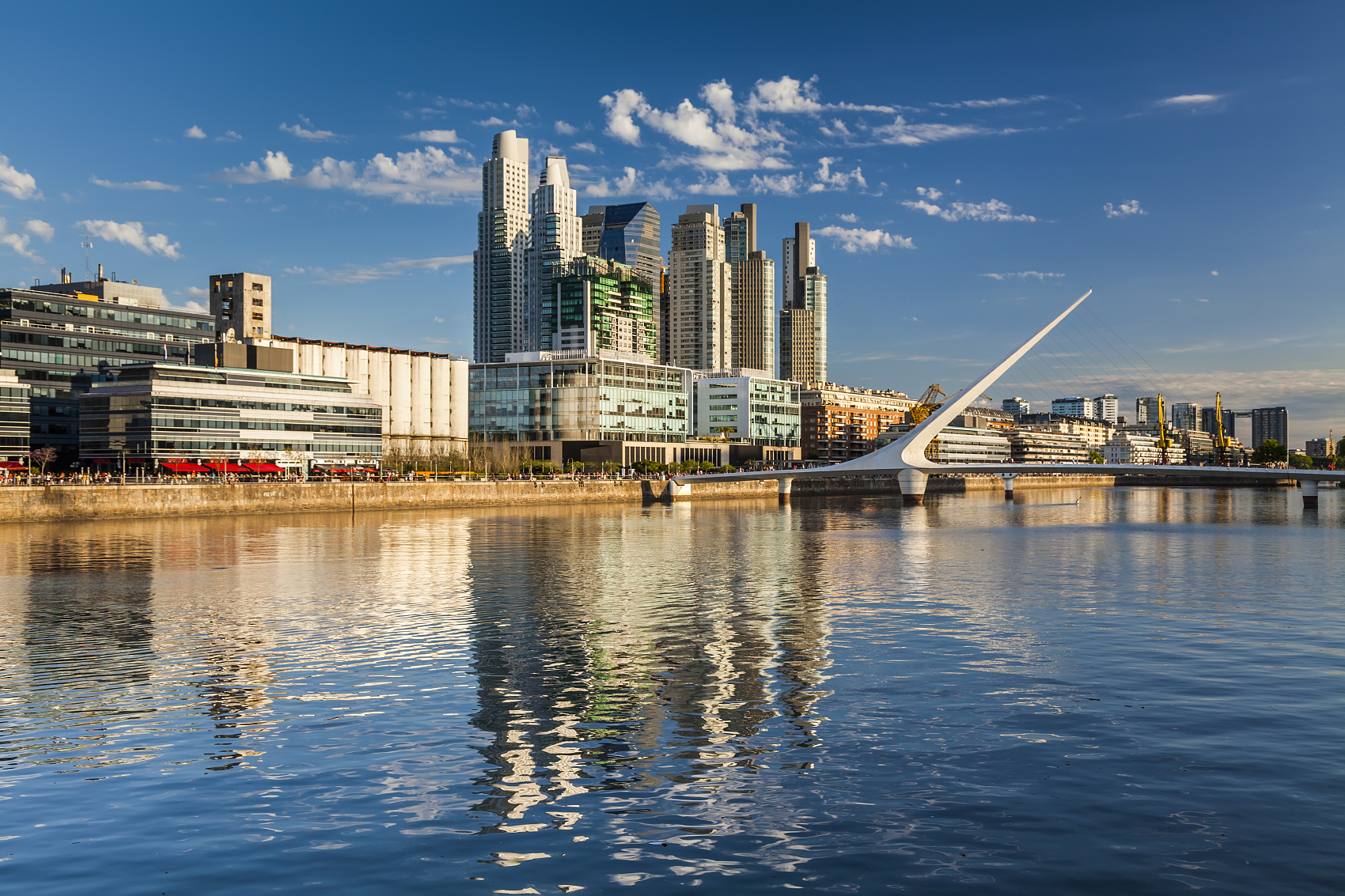 Opening up a New Era in China-Argentina Relations

It gives me great pleasure to attend the G20 Buenos Aires Summit and pay a state visit to the Argentine Republic at the invitation of President Mauricio Macri in the promising season of spring in the southern hemisphere.

As an ancient Chinese poem reads, "If you have a friend afar who knows your heart, distance cannot keep you two apart." The peace-loving people of China and Argentina have rendered each other mutual understanding and support, the geographical distance between us notwithstanding. And our bilateral relations have stood the test of changing international circumstances and set an example of solidarity and cooperation for common development between two emerging economies and developing countries.

— China and Argentina are good friends who trust each other. During our four meetings in a short span of two years, President Macri and I reached important agreement on ways to grow bilateral relations and we are united in placing enormous importance on China-Argentina relations. China firmly supports Argentina in exploring a development path suited to its national conditions and has every confidence about its future. Bilateral mechanisms such as the inter-governmental permanent committee, the strategic dialogue for economic cooperation and coordination, the parliamentary political dialogue committee and the mixed commission on economic and trade cooperation have been operating smoothly, injecting strong impetus into continued progress of bilateral ties. Our two countries have also supported each other on issues of respecting sovereignty and upholding territorial integrity.

— China and Argentina are good partners of common development. China is Argentina's second largest trading partner and largest destination of its agricultural exports. In 2017 two-way trade reached US$13.8 billion, up by nearly 2,300 times since the establishment of diplomatic relations. Fresh fruit, beef, red wine and seafood from Argentina are well liked by Chinese consumers. China has invested over US$10 billion in Argentina in sectors such as infrastructure, energy, communications and agriculture, creating tens of thousands of local jobs. Chinese products and technologies have contributed to Argentina's pursuit of greater connectivity and competitiveness. Our two countries have increased the scale of local currency swaps. Chinese financial institutions have opened branches in Argentina. Such financial cooperation has provided support and services for Argentina's economic and social development.

— China and Argentina are close friends that admire each other's achievements and value mutual learning. There are two passions for Argentinians, both centering on movements of the feet. One is football, and the other is tango. Argentine football players and coaches have joined Chinese football leagues. And groups of young Chinese have received football training in Argentina. There are tango dance associations and clubs in many Chinese cities. And Chinese dancers have competed and won medals in world tango tournaments. Among Argentinians, there is an abiding interest in China and the Chinese language. The literary legend Jorge Luis Borges used Chinese allusions such as the butterfly dream of the philosopher Chuang Tzu and the Great Wall in his works, including The Paint Cane. And he indeed had a cherished Chinese paint cane in his possession. More than 800,000 Argentinians participated in Spring Festival temple fairs held in local communities early this year. The Confucius Institutes and full-time public schools that teach in both Chinese and Spanish languages are packed with students. Our two sides are also working on ways to make flight connections more convenient for Chinese tourists to travel to Argentina and appreciate the charm of glaciers, waterfalls, and the gaucho culture.

The world we live in today has been undergoing tremendous changes which are unseen in a century. While the momentum of multi-polarity and economic globalization is unstoppable, rising global challenges have also emerged. Both China and Argentina are at a crucial stage of development. The Chinese people are making unremitting efforts to realize the Chinese dream of great national rejuvenation. And the Argentine people are striving to realize the Argentine dream of development and revitalization. Let us seize historical opportunities, move forward with the times, and join hands to open up a new era in China-Argentina comprehensive strategic partnership to the greater benefit of our peoples.

First, we need to strengthen strategic communication based on mutual respect and trust. To grow our bilateral relations, it is important to draw up a blueprint with a broader vision to guide intensified exchanges in various fields between governments, legislatures and political parties and at sub-national levels and to increase the sharing of governance experience. It is important that we enhance mutual understanding and political trust, and give each other continued firm support on matters concerning core interests and major concerns.

Second, we need to deepen practical cooperation for win-win results. Efforts need to be made to better synergize our development strategies to take forward the Belt and Road Initiative. Cooperation will be deepened in such key areas as infrastructure, energy, agriculture, mining and manufacturing. Trade facilitation will be promoted and new cooperation models such as e-commerce leveraged. China welcomes Argentina's continued participation in the China International Import Expo and hopes to see more Argentine exports to China. We look forward to more high value-added Argentine products and services in the Chinese market, which will expectedly support Argentina's transformation from the world's granary to supermarket.

Third, we need to expand people-to-people exchanges for mutual learning. More people-to-people interactions will be encouraged, and cooperation in culture, education, science and technology, sports and tourism and at sub-national levels expanded. More measures may be introduced to facilitate personnel flows and share development experience. All this will contribute to stronger public support for China-Argentina friendship.

Fourth, we need to enhance coordination and collaboration for mutual support. Coordination under multilateral frameworks will be strengthened, including at the United Nations, G20, WTO and the Group of 77, to underline support for economic globalization and the multilateral trading system and safeguard the fundamental interests of emerging markets and developing countries. Together, we will make our contributions to maintaining world peace and building an open world economy and a community with a shared future for mankind.

The all-round, fast growth of China-Argentina relations is an epitome of the vibrant relations between China and countries in Latin America and the Caribbean. China and Latin American and Caribbean countries, as important developing countries and emerging markets, all face unprecedented opportunities and challenges. It is therefore important for us to deepen cooperation and make progress with concerted efforts. This is why I have called for forging a community with a shared future and formulating a new blueprint for Belt and Road cooperation between China, Latin American and Caribbean countries. Both initiatives have been warmly received by friends from countries in the region. Guided by the principle of consultation, collaboration and benefit for all, China is ready to work with Latin American and Caribbean countries to promote connectivity in the five priority areas as policy, infrastructure, trade, finance and people-to-people ties. All this will help translate our Belt and Road cooperation into more tangible benefits for our peoples, and facilitate cooperation upgrading and the fostering of new growth areas in our relations.

This year marks the 10th anniversary of the G20 Summit. A decade on, the G20, with its remarkable achievements in coping with the international financial crisis and promoting global recovery, has become an anchor of the world economy and a propeller for global economic governance. It is vital for the G20 to maintain its role as a premier forum on international economic cooperation, follow through on the consensus of previous summits, and chart the course for the world economy. Following the theme of "Building Consensus for Fair and Sustainable Development", China will give its full support to Argentina in hosting a successful G20 Summit, for which we are full of expectations.

We hope the G20 will stay committed to the spirit of solidarity and partnership. As it has been instrumental in steering the G20 through the storms of the international financial crisis, this very spirit will continue to inspire the G20 in staying ahead of the curve of the world economy. Jointly moving the world economy forward on the right track is the founding mission and the primary task of the G20. We need to strengthen macro policy coordination and cooperation, and more importantly, we need to unequivocally uphold the multilateral trading system and build an open world economy.

We hope the G20 will continue to advance the process of economic globalization. China highly commends the people-centered vision for G20 cooperation as championed by President Macri. Economic globalization has provided a robust driving force for global growth and enabled flows of goods and capital, advances in science and technology, progress of civilizations, and interactions between people of different countries. As for the problems that have arisen in this process, we need to take a proactive and measured approach, act in the interest of building a community with a shared future for mankind, and pursue a more open, inclusive and balanced economic globalization in line with the principle of consultation, collaboration and benefit for all in order to serve the interests of people of all countries.

We hope the G20 will continue to take the lead in shaping paths toward innovation-driven growth and long-term governance. New technologies and new forms of business have created both opportunities and challenges. Countries need to foster new drivers for global growth through innovation, and build up the momentum of the digital economy and the new industrial revolution. As innovation may cause risks and challenges for employment, it is important to better equip our workers with the capacity to adapt to technological transformation. We need to continue to put development front and center in global macro policy coordination, and keep in mind the need for development throughout our discussions of international cooperation in all areas. The concerns of developing countries should be accommodated and their development space preserved. Efforts should be made to support infrastructure connectivity and help developing countries break growth bottlenecks and achieve sustainable development.