It seems the days when Japanese brands were hotly favored in the Chinese market are gone. However, tangible signs still exist of strong trade and investment ties between the two East Asian economies. 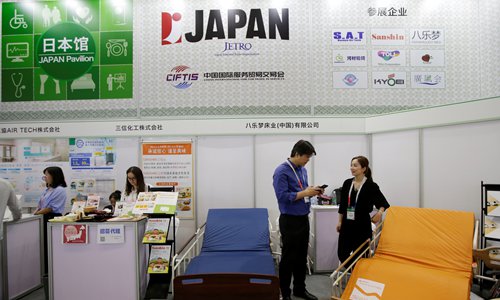 Japanese products are displayed at Japan's booth during China International Fair for Trade in Services in Beijing on May 28. (Photo: VCG)

Beliefs are also firmly held that wide-ranging China-Japan cooperation, especially the bonds between the two nations concerning the exploration of business opportunities in third markets, will continue on its forward trajectory despite trade tensions between the US and other economies, notably China.

Actualized investment by Japanese businesses in China grew 16.5 percent year-on-year to $3.81 billion in 2018, according to the white book released in Beijing last week by the Japanese Chamber of Commerce and Industry in China. This compares with an increase of 3 percent in actualized global investment in China last year, which hit $134.97 billion.

Results from a Japan External Trade Organization (JETRO) survey on Japanese-invested companies operating in China between October-November 2018 showed that 48.7 percent of the surveyed companies considered expanding their businesses within the next two years, while 44.8 percent said their business plans would remain unchanged. The ratio of those opting for expansion has continued to climb since registering 38.1 percent in 2015 - for the first time falling under 40 percent since the first survey was conducted in 1998.

The numbers speak volumes for China-Japan ties in the economic arena, although Japanese brands, from electronic devices to home appliances, are no longer the focus of attention in China’s consumer market, as China's indigenous technology brands have rised to prominence.

In late March, Sony announced it would halt production at its smartphone plant in Beijing, explaining the move was part of efforts to restructure its mobile business. The move heightened concerns over the Japanese electronics giant's sagging smartphone fortunes.

That being the case, some Japanese brands are still appealing to Chinese consumers. One recent example was the sensation caused by Japanese fast-fashion brand Uniqlo whose partnership with US artist and designer Kaws sent Chinese shoppers into a buying frenzy. The online resale value purportedly is eight times higher than the original retail price.

Japan received a record 8.38 million Chinese travelers last year, an increase of 13.9 percent from the prior year, according to statistics from Japan National Tourism Organization. China continues to be Japan’s largest source of international tourists, a position it has held since replacing South Korea from the top spot in 2015.

More noteworthily, the two nations have been forging closer ties in the financial sector. In April, they signed an agreement to cross-list exchange-traded funds (ETFs) in each other’s markets. The ETF scheme linked both stock markets under China’s Qualified Domestic Institutional Investor and Qualified Foreign Institutional Investor programs and has arguably become a viable contributor to China’s financial opening-up.

As such, China’s consumer market, its sizable middle-income population, and a continuation of bold reformist drives are the cornerstones of bilateral economic cooperation and explains the business optimism among Japanese enterprises operating in China.

As long as this optimism remains intact, it is believed that Japanese businesses would remain committed to the Chinese market to maintain strong bilateral ties. Apart from that, growing attention given to the two nation’s presence in third countries should cast light on China-Japan economic relations which extend beyond investment in each other’s markets.

In this regard, both sides have made progress. The two governments concluded a Memorandum on Business Cooperation in Third Countries between Japan and China in May 2018.

Additionally, the China-Japan Forum on Third Country Business Cooperation was held in Beijing last October. A total of 52 memorandums of cooperation were inked and included areas such as infrastructure, logistics, IT, healthcare and finance, according to JETRO.

There’s little doubt that such advice will be heard attentively as the Chinese economy continues to open wider to the outside world. Meanwhile, efforts should be made on the Japanese side as well. Since the China-proposed Belt and Road Initiative (BRI) fits well into the vision for third country business cooperation between both nations, perhaps the Japanese government, while pushing for the Indo-Pacific strategy, could open its mind a bit.

By joining the BRI, which highlights connectivity and inclusiveness, Japanese companies could enjoy the economic dynamism not only of Asia but also the Eurasian continent at large, including Europe, Shindo noted.

The upcoming G20 summit in Osaka could be a game changer if the two Asian economies explore BRI possibilities and figure out a way that they could join hands within the initiative’s framework.