German Social Democrats' vote on March 4 to renew a grand coalition with Chancellor Angela Merkel has ended months of uncertainty. In Berlin the next day, Merkel said in a statement that the government shall quickly start work. She listed ensuring open competition with China as one of her government's priorities. 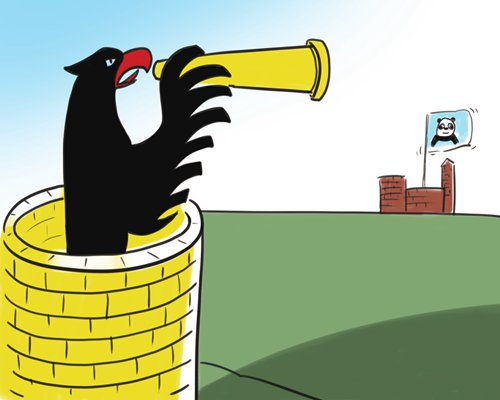 Recently, many German politicians have been negative toward China. This peaked when Merkel warned Beijing that Chinese investments in the Balkans must not be linked with political demands, at a joint press conference with Macedonian Prime Minister Zoran Zaev in late February. "The question is … are the economic relations being linked with political questions?" She said, adding this would "not be in the spirit of free trade."

Merkel has all along been kind to China but why did she do an-about face this time? In fact, saying that "China has been splitting the European Union (EU)" has been circulated in Germany for years. Since China and 16 Central and Eastern European countries set up the "16+1" cooperation mechanism in 2012, Germany has become quite skeptical about Beijing. Boasting of close relations with Central and Eastern European states, Germany felt that China was to grab its traditional market and politically woo these countries with the intention to "divide and rule" the EU. Outgoing German Foreign Minister Sigmar Gabriel has on various occasions called on China to respect the "One Europe" policy.

Actually, China has no intention to split the EU. Instead, it has reiterated its position to support European integration and endorse Balkan countries in joining the union. Beijing is happy to see a united, strong EU.

Over the past five years, the establishment of the "16+1" mechanism has substantially promoted the development of Central and Eastern European countries. This has helped restore a balance within the wider union. Cooperation between China and Europe should be open and diversified, aiming at fruitful results. Germany should not look at this sub-regional cooperation through biased lenses.

The "16+1" mechanism is not the only misunderstanding Berlin has about Beijing. Over the years, China has seen unprecedented development of its hi-tech sector and manufacturing industry, triggering a crisis of awareness among German people.

Whenever Chinese enterprises, especially those in the hi-tech sector, invest in Germany, the latter becomes suspicious. They have too many worries. They think the investment is intended to "steal their technologies" or that the Chinese government is playing a role of "backseat driver." That's why it has established an EU-wide foreign investment review system with France and Italy. The system mainly targets China.

However, these concerns are groundless. Most Chinese investment has brought huge benefits to Germany, which is obvious as German business welcomed it. The German government out of political concerns should not put up obstacles in the way of business. Even if competition were concerned, the level of China's industrialization far lags Germany's. China's limited investment stock can hardly "buy out German business." China was the largest trading partner and the third biggest exporter to Germany in 2017. An export-oriented economy, Germany is highly reliant on overseas markets. Consequently, the closer Sino-German relations, the better it is for Germany's economic development.

Given China's rise in recent years, Germany tends to harbor a narrow-minded attitude toward Beijing. Berlin is not only concerned about Beijing's surging competitiveness but also its "export of Chinese model" to change the existing international order. Gabriel said at the Munich Security Conference in February, "China is using 'One Belt, One Road' to influence the world and create a value system different from that in the West." By this, he reminded Western countries to stay alert against China's influence.

Actually, this is a wrong interpretation of a rising China as well as a proof that Germany lacks self-confidence. The Belt and Road initiative is an international public good China is giving to the rest of the world, and in no way is it meant to export the Chinese model. Beijing is a beneficiary of the current international order and is glad to serve as its defender. We hope Germany can abandon the Cold-War mindset and understand China in a positive way to push forward bilateral relations to a new era.

The author is an assistant research professor with Institute of European Studies, China Institutes of Contemporary International Relations.