Global governance and the SCO

It has been nearly 20 years since the Shanghai Cooperation Organization (SCO) came into being in 2001 as the successor of the Shanghai Five, which was founded in 1996. If there used be a lack of clarity in terms of its mission and purpose, this is no longer the case. The SCO has increasingly become a platform for countries in the region to cooperate on security, economic, and cultural matters.

A side-effect of the collapse of the former Soviet Union was an outbreak of border disputes among the newly formed states, and between the new states and China. One of the most important achievements of the Shanghai Five – China, Russia, Tajikistan, Kazakhstan, and Kyrgyzstan – was the peaceful settlement of the border issues within a shared regional framework. 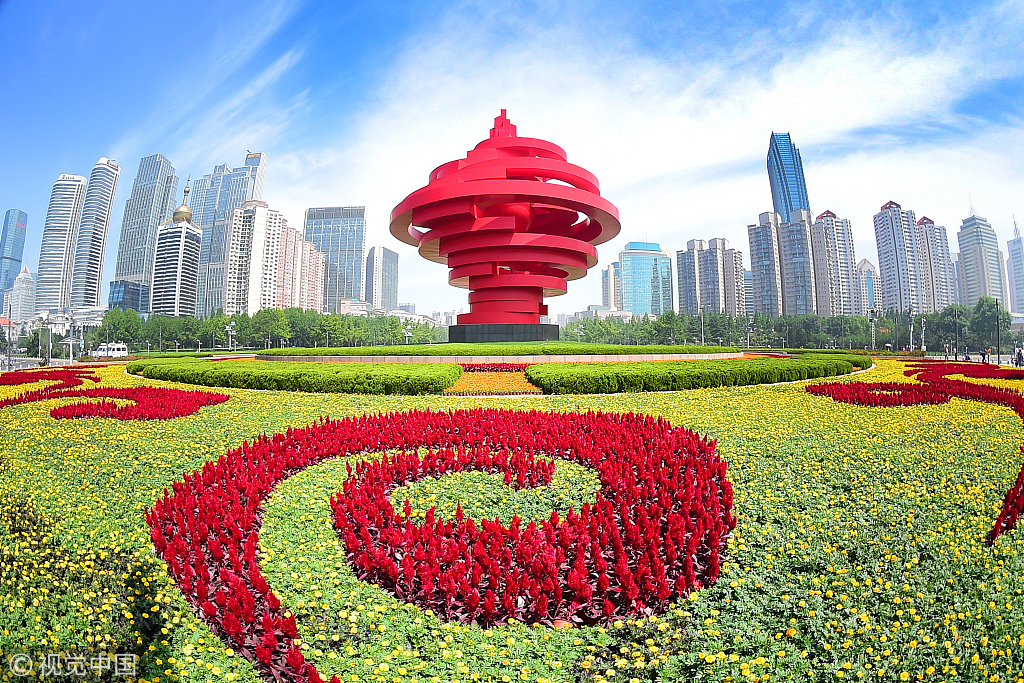 As the Shanghai Cooperation Organization (SCO) Qingdao Summit approaches, the city has been turned into a sea of colorful flowers and trees, seen here on Wednesday, May 30, 2018. (Photo: VCG)

A common concern for SCO countries has been security, as nearly all its members face the challenges of terrorism, extremism, and separatism. The fight against these 'three evils' has been the leading priority of the SCO and is written into its mission statement. As part of efforts to address this shared problem, the Regional Anti-Terrorism Center was founded in Tashkent in 2004. And the SCO countries have held military exercises every two years that focus on counterterrorism. These efforts have created relative stability across Central Asia. Since the Islamic State retreated from the battlefields in Syria, its former combatants have penetrated many other countries, including those in Central Asia. This has made the fight against terrorism an important ongoing task for SCO countries. At the upcoming summit in Qingdao this weekend, the leaders of the SCO member states will reportedly approve a new plan of action for 2019 to 2021 that will combat terrorism, separatism, and extremism.

The SCO has also broadened its security agenda in recent years into new areas such as the drug trade, transnational organized crime and money laundering, and cyber security. This highlights the fundamental and growing role of the SCO in maintaining security and stability in the region.

Another shared goal of the SCO members is economic integration. The SCO, which has included India and Pakistan since last year, is made up of developing countries that view economic growth as one of their key national tasks. There are two mechanisms working to promote regional economic cooperation. One is the Russia-led Eurasian Economic Union, which promotes free trade among countries like Russia, Armenia, Belarus, Kyrgyzstan, and Kazakhstan. The other is China's Belt and Road Initiative, which emphasizes infrastructure construction and building links that stretch from China across Central Asia towards the Middle East, Africa, and Europe.

One of the principles of the SCO is the pursuit of shared development. Both the Belt and Road and the Eurasian Economic Union serve that purpose well, and have been making good progress. According to China's Ministry of Commerce, the volume of trade between China and other SCO members in the first quarter of this year was up 20 percent compared to the same time last year, on top of the 19 percent annual growth recorded for last year as a whole.

At the same time, there has been an increase in the number of cultural exchanges among SCO members, which have included forums on issues facing women and youth in the region. Activities in the cultural field help bring the countries together in a fundamental way. The close ties and friendship forged during the process will offer a long-lasting force that promotes stability and strong relationships among the SCO members.

Many once wondered whether the SCO would become a NATO-like military organization with the goal of countering the West. As it has developed, the answer is clearly no. Security is critical for countries in the region, for sure. But the interests of the SCO extend beyond security to include economic cooperation and cultural exchanges. It is focused on cooperation rather than confrontation, and takes a win-win approach over the zero-sum game. It offers a framework for global governance based on equality and shared development, and the summit in Qingdao will be an important step forward in its evolution.